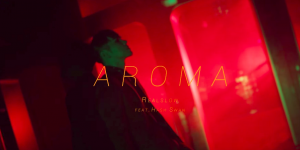 Wheesung, is rebooting his image with “Aroma,” and it packs some serious punch. Realslow has been keeping a pretty low profile ever since he left the military. Aside from his collaboration with EXID’s LE and appearing on some variety shows, he hasn’t been doing much in the way of his own music.

Being the first release after Realslow established his independent label, Realslow Company, “Aroma” marks his long-awaited return to the music scene. The new stage name seems to be an effort to refresh his identity as an artist, returning to his roots while staying with current trends. “Aroma” does a great job of doing just that, re-establishing Realslow as a strong R&B artist, while also managing to compete with newer R&B artists.

“Aroma” falls right under Realslow’s forte: it’s a sleek R&B track, with muted synths and smooth mixing. He utilizes his whispery, soft voice well, and Hash Swan provides a nice contrast to this. Realslow’s voice is subdued the majority of the time, and he only pulls out his range a few times. When Hash Swan comes in for a quick rap breakdown, his lazy and nasally voice cuts through the steady rhythm of Realslow’s singing to provide much-needed variation. The song isn’t monotone, but Realslow doesn’t really venture too much out of his comfort zone. 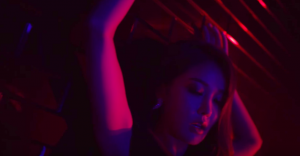 Visually, the MV straddles a line between confusing and compelling. It uses bright, almost lurid colors and casts Realslow in heavy contrast, putting him next to mirrors and in shadowy corridors. The shadows and mirrors offer so much sensory input that it straddles the line between mesmerizing and confusing.

The fact that it straddles that line works; the MV plays to the lyrics’ advantage considering that “Aroma” isn’t presenting a specific narrative. Rather, it presents the experience of earthly desires–being drunk off of someone’s scent and losing your inhibitions–and the visceral sensuality that comes along with that experience. Colors and sensations are more intense and when you’re drunk, and you catch certain snippets of moments more clearly than others, a perceptual experience that the MV re-enacts. The mirrors and the shadows and the intensity of the colors are all emblematic of what it’s like to be drunk and to have all your inhibitions shed away. 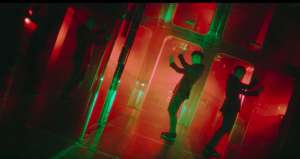 Of interest is the way that the shots of Realslow mostly present him at a skewed angle; he’s rarely presented at a straight, head-on angle. The skewed angle adds a sense of disequilibrium, and the laziness of his movements comes off as sensual. On the other hand, Hash Swan is presented at a straight angle in a dark room. It mirrors the way the song is produced: Realslow’s soft vocals are languid, while Hash Swan’s nasally voice cuts in and shakes up the sound as a contrast against the softness of the vocals. His cuts are stripped away and minimal, unlike the colored lights and the skewed angles. It’s a balance being presented vocally and visually.

That said, one of the MV’s flaws is that it’s quite monotonous: there are brief shots of beautiful women and there are shots of Hash Swan, but mostly it’s just Realslow singing in shadowy corridors and colorfully-lit rooms. The lack of narrative works in favor of the lyrics and the MV is presentably beautifully, but it doesn’t offer much other than just sensory input. 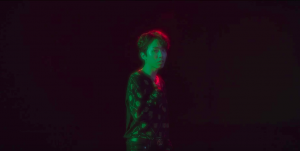 Overall, the MV was well-shot and it worked with the song and lyrics. Realslow has done a good job in refreshing his identity as a musician while keeping his R&B niche, setting up a promising tone for future releases.