Ha:tfelt Entrances with "I Wander" and "Read Me" 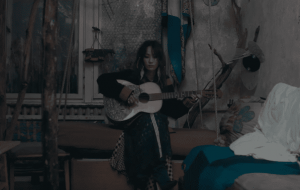 2017 saw the end of one of K-pop’s most iconic girl groups, the Wonder Girls. While the loss of such a gifted pop act is painful, there is a silver lining: the end of the group means that all four of the members are free to embark on or resume their solo careers. And of those four members, it is Yeeun, known solo as Ha:tfelt, that I have been anticipating the return of most. Me? was a potent, powerful debut, and three years later, she has signed with Amoeba Culture and returned with the dual release of “I Wander”, featuring Gaeko  and “Read Me”, featuring Punchello.

The most important thing to understand about “I Wander” and “Read Me” is that they are not a double release; whose only connection is being by the same artist and released simultaneously. They aren’t even two halves of one story. They’re two stories that intertwine, and it is in the intertwining that the real meat of Ha:tfelt’s message comes through.

“Read Me”, starts off with the pages of a scrapbook being turned as an older woman, Wera, narrates in German about the difficulty of writing one’s feelings at the end of life, with everything coming off as too mundane or grandiose. Her husband, Randy, angrily grabs a box from an unseen figure before sitting down and reaching for an old scrapbook. Once he begins to leaf through it, this scrapbook consumes him.

He is incapable of putting it down, or even looking up. Wera guides her husband around the house, wipes his face, strips off his tea-stained clothing, and even bathes him; all while Randy maintains his utter devotion to the scrapbook. The pain of seeing a man ignore someone who so clearly loves him becomes worse when it is indicated that the scrapbook is not about any past successes or lost friends, but Randy and Wera’s own past.

The older version are replaced with a younger pair, sensual, passionate and carefree. Randy is so obsessed with how they used to be, he completely ignores Wera in the present. It is only when Wera– now portrayed as a child– takes it from him in order to dance that Randy is finally able to connect with his wife rather than dwelling on the past.

Until the end credits roll.  The house, previously seen as empty and sterile, is revealed to be messy and rundown. And Randy is within, dancing by himself. It is clear that Wera is gone, most likely dead, and Randy is burying himself in the past because that is the only place his beloved wife is. The situation, someone losing the person who was by their side for 50 years and doesn’t know how to be without them, is so common that it has become ordinary and even expected. Ha:tfelt highlights the quiet, heartbreaking tragedy that most people tend to ignore.

That is, unless you’ve watch “I Wander”. Randy roams aimlessly through an unnamed city. Addled by the grief shown in “Read Me”, he has no goal or direction, ploughing to passersby without any acknowledgement. He doesn’t even slow down to steal things, such as food or alcohol from those around him, merely reaching out as he goes past. Eventually, something does make him stop in his tracks.

Except this is when the focus shifts to Ha:tfelt. Or one of her; she played all the random women Randy encountered. The one we see is a modern hippie, passing her days reading on a stoop, returning to her home to contemplate various items she’s acquired: shoes, a guitar, a new book, and a framed toy gun.

The ways she studies these items and decorated her home gives the sense that she wants to connect with the larger world, but the way she dresses and positions herself when she is outside renders her deliberately invisible. It’s not until she leaves home with a deliberate goal– Randy dropped his scrapbook and, after reading it, Ha:tfelt decides to return it– does she appear as an individual rather than an anonymous stereotype.

Even then, she follows Randy at a distance rather than calling out, as it gives her emotional space as well as physical. But after returning the scrapbook, she doesn’t return to her isolation. She goes inside, and sees Randy dancing by himself. Rather than backing away, as many people would, Ha:tfelt reaches out. This time, the credits give hope: Ha:tfelt reads aloud to Randy, her voice overlapping with Wera’s.

Separately, both MVs are effective but tragic. Alone, Randy’s tale is a depressing look at the inevitable conclusion of a happy marriage, and Ha:tfelt comes off as more than a little self-serving in her reaching out to Randy. But when you see the two together, the true crux of the story forms. Both of them are fundamentally lonely,  but they are able to form a human connection. Across age, race, and language, they form a bond that helps alleviate that loneliness.

Of course, that is Ha:tfelt’s point — the need to connect with people emotionally, and the ability to do so without any commonalities. The German narration is subtitled, but the songs aren’t, which considering Ha:tfelt’s savvy with the international market and considerable English skills, struck me as a little odd. Then I realized I didn’t need them. Ha:tfelt’s greatest strength as a composer and performer is her ability to communicate emotion flawlessly. Her thoughts might be unclear, but the feelings are obvious.

The staid vulnerability on “Read Me” is immediately apparent, matched and enhanced by the delicate strings and gentle staccato drums. It’s a song that speaks of surety in oneself, but falters when someone else has a chance to look. “I Wander” is the opposite: the guitars melt into the track, nearly taking Ha:tfelts voice with them. There’s nothing to truly ground it, as if any moment, it might slip away.

With both songs the lyrics match the music– “Read Me” is about wanting a new lover to truly understand you, the way people read and re-read books, and “I Wander” is about Ha:tfelt’s uncertainty  about where her career will go now that she has left both her original group and label, all through the clever metaphor  of new shoes. Yet, the lyrics provide no new insight into either. Sure, the now the details are clear, but they weren’t needed to understand what Ha:tfelt was saying, especially when watching the MVs. Not only would subtitles be superfluous, they’d be distracting, leaving the audience to miss the forest for the lyrics

“I Wander” and “Read Me” are fantastic works of art, both as songs and MVs. They grip the audience, pulling you under Ha:tfelt’s spell, and what a fantastic place that is. The only complaint is that neither guest verse was really needed, but they’re harmless enough. If this is any indication, Ha:tfelt has a great future ahead of her, and I’m going to be there every step of the way.