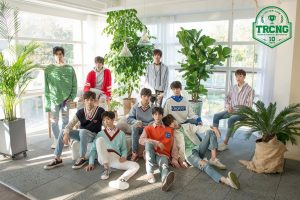 The news that TS Entertainment was debuting a brand new 10-member boy group was met with mixed reactions, at best. When said boy group was revealed to be made up of boys born in 2000 or after, there was even more worry about them. Despite misgivings, TRCNG — which stands for Teen Rising Champion in a New Generation — has made their debut with “Spectrum.” Unfortunately for TRCNG, the MV is too reminiscent of their labelmates Sonamoo and B.A.P to really let them shine in their own right.

The visual elements of the spectrum are shown throughout the video by the use of light and dark — literally two extreme ends of a spectrum. The members mirror each other from one end to the other. For example, when one member pulls some books out of the dark set, it switches to viewing through the new opening from the light set. This echoing goes on throughout the video, suggesting that maybe neither end of the spectrum is quite so different. The lyrics suggest breaking from the darkness and into the light, and are visualized through how the members disintegrate into the light versions of themselves at the end of the MV.

What really gets me with this video, and I admit to being biased, is that it recalls so strongly other TS Entertainment videos. As mentioned before, the MV gives off strong B.A.P and Sonamoo vibes. The dark vs light concept in the industrial setting is highly reminiscent of Sonamoo’s debut “Deja Vu.” The library set in “Spectrum” even looks like the same one used in “Deja Vu.” Furthermore, there are several visual references to B.A.P, most notably their debut “Warrior” in terms of the dance. In the Japanese video for “Kingdom” the dark overcomes the light in the video, much as it does in “Spectrum.”

The theme of the song also feels like a watered-down B.A.P track. Is this a marketing strategy for TS? To have so many groups debut with a similar style and feel would seem deliberate, but their marketing strategies don’t seem so purposeful. While it isn’t unheard of for groups from the same company to have some similarities, they usually have distinct differences, taking for instance Infinite and their new little brother group Golden Child, or the differences between the SM boy groups like Shinee, the NCT units, and Super Junior.

There’s nothing wrong with being influenced by a group. The issue is that the influence is so strong that it takes away any sense of self TRCNG might have of their own. TS is purposely drawing comparisons between the groups which causes one to come out over the other. This also causes unnecessary friction between fans, with those learning about and wanting TRCNG to succeed being annoyed by the B.A.P fans who say that TRCNG is biting another group’s style/concept. Furthermore, as Lo stated in her Sonamoo review, TRCNG deserves to be judged on their own strengths and weaknesses, not how they measure up to their seniors. There’s competition enough in the entirety of K-pop without making a group compete with its own “family.” 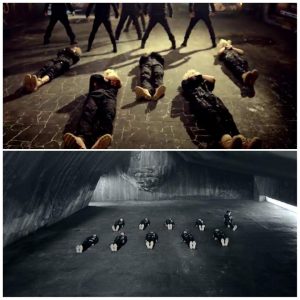 Most importantly, we’ve seen this from TS groups already. B.A.P. did it and has pretty much made it their trademark. Sonamoo got flack for doing it (though they pulled it off well). Having TRCNG do this same debut concept is overkill and shows a lack of creativity from TS. We know this style works well from this company. Highlight what the new talent can really do, not insult the fanbases by copy and pasting the same approach over and over.

The song isn’t particularly wowing or different — to be quite blunt it sounds like it was left off B.A.P’s Matrix album. Hohyeon participated in writing the lyrics, which is fine, but at this point in the game, self-producing and writing idols are a dime a dozen. They’re new and very young, so they have time to grow and develop a sound that’s their own. What they shine at right now is dancing; it is hard to get a group with half as many members to look as clean as TRCNG does in their MV. Combined with the tricks and the overall sharpness of their moves, they could have just gone with a “dance in a box” type video, amped up some of the effects already present, and had a more impactful video.

Is this the best debut? I wouldn’t go that far, but it is a strong one. The video and styling are polished and make up a cohesive concept. All of the elements fit together. However, it will take a comeback to say whether TRCNG truly will be a champion of the new generation. They have a lot of competition and blatantly recycling old looks from their seniors isn’t going to cut it. If they continue on the “TS path” they’ll come back with a bright, upbeat song and get hate for following the trends instead of being unique. TRCNG needs a voice that is their own, which they have time to grow into it, before I can truly render a verdict on them.