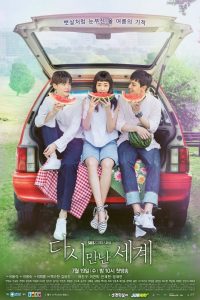 At first Reunited Worlds appears like a typical fantasy romance following the popular trend which has produced a great number of hit dramas like Goblin and You From Another Star. Most certainly the basic plot makes it seem so: although originally born in the same year, two people end up 13 years apart, an 18 year old man and a 31 year old woman. In this story, there is the use of tropes much associated with the genre, the resurrection trope and the age reversal trope. But the first episodes set out that this is not your typical fantasy romance.

The main proponent of the drama that makes it different is the lead character, Sung Hae-sung (Yeo Jin-goo). While he does have a number of supernatural abilities like the main characters of many popular fantasy romances (Goblin, You From Another Star, Another Oh Hae Young to name a few), there is a distinct difference between those features and Sung Hae-sung: his powers have a clear purpose in alignment with the “healing” theme (I would describe a healing theme as a focus on universal subjects like family, love, loss) while the typical super powered male lead has powers utilised in the show purely for dramatic or comedic effect.

Sung Hae-sung enters a new world where his siblings are estranged and Jung Jung-won, the female lead played by Lee Yeon-hee, is still haunted and impacted by his death and its legacy. Hae-sung is a man on a mission-trying to help his siblings and friends heal from the past and sort out their present lives. 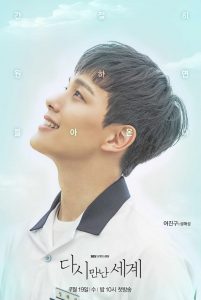 Each family member has changed after Hae-sung’s death. Sung Hae-chul (Kwak Dong-yeon), a younger brother formerly sweet and funny, is now a hardened loan shark with a young daughter; Sung Young-in (Kim Ga-eun), a shop assistant looking for love in all the wrong places; Sung Young-joon (Yoon Sun-woo) who abandoned his family in order to have success as a doctor; and Sung Soo-ji (Kim Hye-jun), his youngest sister now the same age as him.

His attempts to fix his family have not yet began in earnest in these episodes. However in one poignant scene from Episode 10, we see Sung Hae-sung asking Sung Young-joon to reconnect with his siblings that he abandoned before so they can sit together and work through the issues that have kept them apart. In response Sung Young-joon scorns him stating that he does not want to see him and that they are not brothers at all. In the end, Sung Hae-sung loses his temper and punches him.

Furthermore we see his powers in usage to help his family members, one example being Sung Young-joon who has had an affair with a married man who lied to borrow money from her. Sung Hae-sung goes to enact vigilante justice, itself not usual for a character of his kind but it is surprising how early this takes place and how involved he is in others’ lives.

Typically in a fantasy romance, a main character in particular, a male main character would not act in this way this early because they start off isolated from society and unemotional like the hero of You from another star or Goblin. His past before his resurrection as a carer and helper for family and friends means that he is much more warm heartened.

Reunited Worlds has a contemplative tone with its exploration of loss, death and relationships, something that is not unique for fantasy romances, Goblin looked at similar themes but these themes are rare within the genre. In one touching sequence, a mysterious character who is like Sung Hae-sung has been resurrected from the dead shows Sung Hae-sung his son who is old, bedridden and unconscious in hospital and he talks of his desire to talk to him. Later he cries over the fact that he cannot sign his consent form for surgery and help save his life. 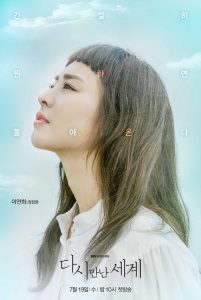 In addition to this, weaved into the story is a mystery element to hopefully be explored further in future episodes. The element of mystery adds an extra touch to the fantasy romance when Sung Hae-sung is wrongly accused by the murder of Jung-chul, a bully of his younger brother which took place on the day that the main character died. With this, Reunited Worlds has another level of complexity to the drama, making the show more layered.

Also there is an everyday, slice of life feel to Reunited Worlds. Usually fantasy romances tend to be filled of riveting special effect scenes showcasing the main character’s superpowers and the drama tends to have high stakes. Sung Hae-sung is inexperienced with his abilities (it has been explained that he will grow stronger with time and in Episode 12, we see him having “training sessions”) and this combined with his youthfulness mean that Sung Hae-Sung is a physically much weaker main character than your average main character. The show is much more mundane which makes it distinct but also slightly less engrossing and engaging.

Despite the heavy focus on family, Reunited Worlds still fits within the romance genre and retains many elements of a typical fantasy romance. Specifically it remains centred around a relationship between Sung Hae-sung and Jung Jung-won. The whole show is a play on reunited lovers trope with added supernatural elements. 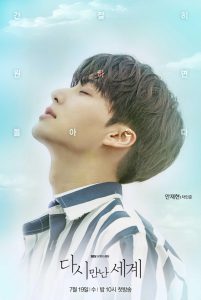 Moreover the backstory shows that Jung Jung-won and Sung Hae-Sung were each other’s first loves, a classic twist in Korean drama romances. The show also features the staple of Korean drama romances: the love triangle, with Cha Min-joon played by Ahn Jae-hyun, the head chef and owner of the restaurant where Jung Jung-Won works.

However in Episode 12, it is revealed that Sung Hae-Sung has limited time back on Earth and is running on borrowed time. This suggests that the show will be avoiding the romantic happy ending that is typical of fantasy romances where by any means and sometimes against all logic the main couple end up together. I would not at all be surprised if Cha Min-joon ended up with Jung Jung-won in the end.

On the whole, the show is a refreshing new take on the trend of fantasy romance, adding depth to a currently heavily used genre. Whether it can keep this up is questionable as it is a hard task to balance out the contemplative tone and the healing theme with a need for product placement, more comedy and romance. Looking forward, I do hope it can achieve this despite the fact that other shows like Goblin failed to do so. To do this, is a need for the show to speed up a bit with its plotlines and for there to be enough development to make for a satisfying conclusion.