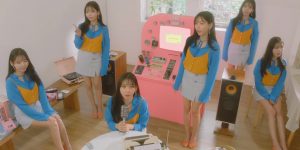 Raina‘s “Loop,” her first comeback in over a year, brings a cute and refreshing track that offers valuable dating advice. It’s a welcoming and purposeful track from the former After School and Orange Caramel singer. The song is part of a single album with three songs. While the song is mildly forgettable, it has an aurora of cuteness and melody that make head nodding irresistible. NU’EST‘s Aron puts on a good show with his quick rap appearance. Overall, it’s a quality track, but since Raina appearances are so sparse, it’s disappointing not to get another song as good as “A Midsummer Night’s Sweetness.”

The prevailing theme of “Loop” is a reminder to couples that old habits can send a relationship spiraling into frustration.

While habits are the brain’s way of creating efficiencies and familiarity, there is a time in many relationships that it becomes boring. The same date to the same movie cafe can become repetitive. Eating at the same ramen restaurant while ordering the same food becomes boring after the 10th time; some variety is essential. Sometimes Raina wants to go to a play, drink alcohol, or travel somewhere. This is also true in relationships when couples get complacent with what they do.

On top of cute vocals, the way Raina tells her story in the video is interesting. Instead of having a simple daydream, Raina uses copies of herself and a video machine. The machine that exists for both Aron and Raina is a way to talk back and forth and send messages. It’s a way for them to communicate so the audience can see what they’re saying. Raina uses it to share with the viewer that the messages she receives are always the same. Aron’s device is used as a way to share Raina’s frustrations towards the couple and their bland dates. Throughout the MV, Raina displays her happiness as she daydreams of going on trips and dates with a very interested lover.

Much of these flashes and stories could be to draw attention to the outdated technology. The machine Raina and Aron use to communicate is a sophisticated emotional machine that has countless nobs, gauges, and switches. All of the pieces to the machine look dated when the camera pans over it. The emotion machine sits next to a computer straight from the 1990s or early 2000s with a small pixelated display and that odd white but very light brown color that old, thick monitors used to have. On top of that, there’s the VHS tapes. All of this dated technology could allude to the relationship being so old that it never evolved. It never grew into the 21st century. It’s all just old and bland. Everything fun that used to happen in the past has dried up into a poor routine that Raina can find little excitement in anymore. She’s dreaming about a time where she can find the excitement she used to possess. For now, she’s stuck half asleep in reality. 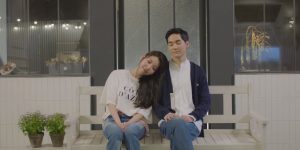 There’s a bit of irony that Raina alludes to falling asleep to her repetitive routine of dates, but the song itself is redundant and lacks creativity. It’s a generic coffee shop track with little variance musically. The chorus itself rolls well, but it’s rather repetitive. The fact that she’s unsettled with the movie cafe is brought up twice in the chorus in almost the exact same wording. It could be played on a loop in headphones, but I’d completely forget I was listening to the song after a few times through the chorus. Easy listening has a place in music and culture, but the irony behind Raina’s complaints about redundancies in relationships couldn’t be ignored when juxtaposed against the repetitive song writing.

“Loop” has plenty of high points. As a song, it’s quite refreshing and soothing. Raina’s voice is layered over minimal instrumentals and she’s allowed to share her voice to a simple beat. The chorus itself is melodic, but Raina’s voice adds a layer of interest to it. It’s so easy to imagine her singing over a nice cup of coffee with her smile puffing up her cheeks.

The moral of the story is that habits in a relationship can be good, but they can be overdone. Going to the same place to eat every week and ordering the same thing isn’t cute. Raina manages to tell this story in a cute and entertaining way. But there just isn’t much sticking power and it breaks its own rule. It creates a song that follows so many musical patterns that aren’t interesting, much of what she’s complaining about. Raina, Orange Caramel, and After School fans will welcome this comeback but it might be forgotten rather quickly due to its lack of uniqueness.