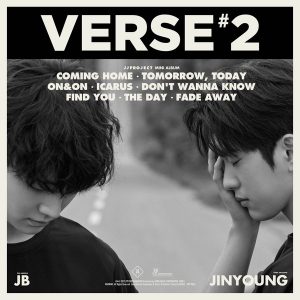 It’s been five years in the making — JJ Project, a duo of GOT7’s JB and Jinyoung, have finally returned with the mini-album Verse 2. A brief history about this group: in 2009, the two auditioned for JYP Entertainment individually, and tied as winners. Three years later, they made their official debut as JJ Project with the high-energy single “Bounce”, which garnered explosive views on YouTube and performed extremely well on the charts. Prior to debuting, they were also cast in Dream High 2, which really boosted their popularity. However, the duo was put on indefinite hiatus as five new members were added to form GOT7 in 2014.

Verse 2 is massively different from their previous album, Bounce, which was peppy and perky and bright and everything high-energy. In stark contrast, their latest mini-album is more introspective, calmer, and overall more mature.

It makes sense; the duo have experienced so much together since Bounce: from going through indefinite hiatus on their duo project to debuting a second time with five other members to finally being able to continue ahead with each other.

The title track, “Tomorrow, Today”, expresses these feelings of doubt and fears of going astray. The reflective lyrics — to which JB and Jinyoung contributed — are heartbreakingly beautiful and perhaps even reveal their own feelings after JJ Project was discontinued back in 2012:

“Even when I’m busy, they endlessly ask

I’m going forward but I keep looking back

What will I become at the end?

Will I regret it if I look back later on?” 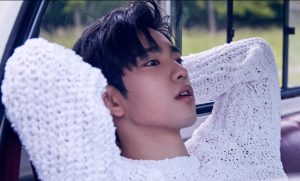 The song itself features soft rock vibes with a harmonic electric guitar and keyboard accompaniment. But the spotlight here is on the duo’s vocals: their voices blend perfectly with great use of harmony, and echo this sentimental feeling that really drives up the emotional aspect of the track. Choreography-wise, there is heavy use of mirroring, potentially symbolising them finding their own selves in each other. The only thing to be said is that it relies very heavily on the vocals and emotion to move the song along, so song-structure wise, there isn’t much variety to create interest.

My favourite track is “Coming Home”, another track that explores a deeper R&B sounds with a more melancholic atmosphere. It opens with a soft choral line, which is what initially drew me in, but what made me stay for the track was the heavy use echoing in the song. For example, during the chorus, JB begins with “I”m coming home”, but Jinyoung echoes an octave higher in falsetto “Coming Home”. They are in perfect sync with each other; even though they don’t sing together in most parts of the song, their voices just blend seamlessly together despite their very different vocal colours.

“Icarus” mixes vibes from “Tomorrow, Today,” and “Coming Home”. I have to admit, I had no idea who Icarus was prior to this song, but upon doing a quick Google search, found that Icarus was the son of Daedalus, who created the Labyrinth. Icarus tried to escape from Icarus with wings of feathers and wax made by his father. Although his father warned him not to fly too low nor too high, lest the cold sea would freeze his wings or hot sun would melt them. Icarus, unfortunately, didn’t listen to his father: his wings melted and he fell from the sky to the sea. It is sometimes disappointing when a song’s title has nothing to do with the lyrics, but there is acknowledgement of Icarus and his story in the lyrics here:

“Flying to the sky as though I’m free

In order to go higher, I flop

Even if I’m afraid” 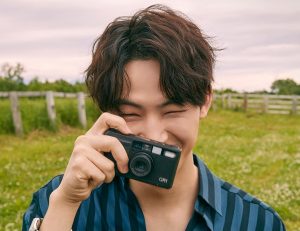 Musically, the song continues the soft rock genre, and the soft harmony overall creates an ethereal mood.
“On and On” has a more pop-friendly opening with synth and electronic notes, and moves much quicker than the rest of the tracks. It makes for a more interesting track in terms of the electronic-heavy instrumentals during the instrumental break, but can be a little confusing as to where the chorus is, because there isn’t much variety in the structure nor changes in the melodic contours. It takes a few listens to get used to.

“Don’t Wanna Know”, fortunately, does not suffer from this problem in “On and On”, with a diverse structure that makes the overall song pleasing to the ear. The repetition in “I don’t wanna, I don’t wanna know,” in the chorus is extremely catchy, and for a slower-tempo track, this song moves along really smoothly and well.

“Find You” finishes off with a mix of pop and soft rock genres. Like the previous track, the chorus with the repeated oohs and “You and I” in the lyrics makes for a memorable song.

JJ Project is one of the rare duos that are just so in-sync with each other. They sort of remind me of Super Junior D&E, with their friendship and perfect harmony. When you think about it, JB and Jinyoung have spent so much of their lives together: from tying for first place at the auditions to training together for JJ Project to debuting as a duo to being told that their project wouldn’t work out to then being put into GOT7 and experiencing great popularity with their current group. 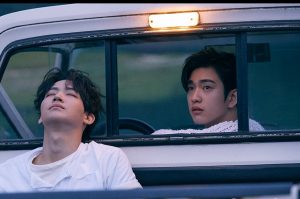 Verse 2 focuses more on their inner feelings and reflections: from the introspective lyrics to the sentimental and sometimes melancholic melodies, they have really expressed their honest feelings of doubt, fear, and finally finding their way and identities throughout this whole journey. To some extent, I feel that this album is less about maintaining popularity or doing well on the charts, and more as a means for the two members to achieve closure and move on both personally and musically.

Musically, the album is quite consistent, toeing the border between soft rock and pop, and while some might think that this runs the risk of sounding boring, it is also a good strategy to solidify their sound as it is extremely different from Bounce.

The album is not perfect by any means, but it is a beautiful representation of JJ Project and their journey thus far. Both members evidently contributed heavily to the production of this album, and it is just so meaningful, to both themselves and fans of JJ Project and GOT7.