Time often comes to a standstill after a long weary day at school or work, and nothing is better than blocking out the world and drowning yourself in an ocean of mellow tunes to seek solace. I like to envision a quiet bus ride home after school as a time for recuperating and reflecting – this time with my latest K-indie favorite, Moonmoon, whose songs bring nothing but comfort.

I happened to come across Moonmoon during one of my visits to what I like to claim as the “good” side of YouTube. While browsing through Mirrorball Music’s YouTube page, the pastel pink video of “Roach” caught my eye and I’ve been in love ever since. 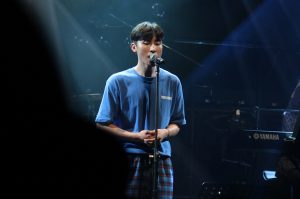 There isn’t much we know about Moonmoon, except for the fact that his name is Kim Young-shin, he made his official debut last year and he has caught the attention of various Korean idols, which helped boost his popularity.

As the Hallyu Wave remains to take over the world, many novel or underground K-indie artists are benefitting as well from being picked up by idols themselves, who then introduce them in their song recommendations for fans. This was exactly the case for Moonmoon.

While the title immediately invokes images of the bug that should not be mentioned, “Roach” is actually the complete opposite – it is a whirling soundscape of relaxing vocals and simple guitar instrumentals. The introduction also does a hauntingly exceptional job in drawing the listeners into the slow-paced, melodious masterpiece. With muted beats that enhance the dreamy ambiance, “Roach” is the perfect song if you ever feel the need to wallow in your maudlin reveries.

If you see me, run away
Throw me away, step on me
If it’s ok with you, I won’t show myself
on your window or in the darkness

Mingling in the naïveté of a lilting acoustic serenade, “Contrail” off Life Is Beauty Full is probably the song that Moonmoon owes his breakthrough, after being mentioned by Jungkook during a V Live session and IU on radio. The former’s succinct cover during his V Live session has resulted in many fans flocking to check out “Contrail” or Moonmoon’s other songs. Soon, “Contrail” debuted on online music charts, much to everyone’s joy. Whatever the source of publicity may be, it’s lovely to see more appreciation for Moonmoon.

With simple instrumentals, honeyed vocals and self-deprecating lyrics, it’s no wonder why “Contrail” resonates so well with the public. It is also in Life Is Beauty Full that we get to witness Moonmoon’s gradually establishing sound and emotional sensitivity which is often associated with adulthood and unrequited love.

Earlier this year in April saw the release of another EP titled Paint, which proudly stands testament to Moonmoon’s potential at novelty in his craft. Tracks such as “Balloon” and “Angora” ring of serenity and tenderness, with a catchy melody and calming flair, perfect for a night of pensive contemplation when it’s pouring outside and you feel extra sentimental all of a sudden.

My personal favorite from the EP would be “Paint”. Moonmoon’s sweet vocals of the song are mature in resonance, representing the impeccability of a soothing acoustic flavor. The unified choir at the last chorus further adds to the mystique of the acoustics, packing a punch for the entire track.

Moonmoon brings to mind home away from home, a familiar yet original sound. His music delivers unpretentiously with such modesty and rawness that should be wholeheartedly appreciated. It offers a spurt of energy whenever you’re feeling it and whenever you’re not.

It is a constant struggle to break into the scene and bring something new to the table among the multitude of music styles that already exist out there. Though still pretty low-key with an understated discography, Moonmoon is an emerging indie artist whose songs encapsulate an alluring solace. It is through the subtleties in his tracks that mark his true musicality and humble growth.

Whether it’s for a cozy rainy night, a solitary bus ride home or for a study playlist, Moonmoon’s laid-back melancholy tunes prove to be a lilting companion for a getaway from reality for awhile. Eager to hear more from him, I highly recommend his music to those who enjoy mellow acoustics and also those who simply need a pat on the back whenever life gets too taxing.