Mamamoo is Funny and Confident in "Yes I Am" MV

Mamamoo isn’t the typical girl group. They aren’t super cutesy, nor are they overly sexy. They manage to hit that balance of mature and confident while still being silly and accessible to both fans and non-fans. Their command of the retro style coupled with strong vocals and a signature style and sound has helped them create a niche in which they truly excel at. And while they seem to have a habit of starting controversy around their comebacks, there’s no denying that their star is on the rise. Mamamoo’s latest single, “Yes I Am” is a summer single that combines all the girls’ strengths into a fun, colorful MV that’s perfect for the season.

At first the song doesn’t seem like much. It’s got the big band sound that has become the backbone of Mamamoo’s musical identity. From the music I’ve heard from them, the song doesn’t sound out in terms of growth or change in sound. It’s a perfectly fine song that is technically sound and is enjoyable to listen to, yet in the overall scheme of things it feels like it’s been done before, not just by Mamamoo, but in general. I say this a lot, but with so many recycled genres and concepts, a group has to do something exceptionally well to stand out. Mamamoo is known for this particular style yet “Yes I Am” doesn’t bring anything new, musically, to the table.

The MV, however, is quite fun, and the lyrics are actually more than standard summer fare. In fact, the song is all about girl power and confidence. A comparison could be made to the 90s girl group, TLC. While Mamamoo isn’t as in your face or as sexually open, the crazysexycool vibe comes across, as well as the comfort to be silly while also being critically honest.

Each member talks about the individual things that make them unique. In correspondence, the MV shows them enjoying the aspect they discussed. For example, when Moonbyul raps, “My complex is nothing/Slacks, shirts, loafers/With a classic style/I express myself, my baby” she’s seen wearing a stylish pantsuit (albeit with heels). Similarly, Hwasa plays up her sexy image while Solar and Wheein embrace their rounder, fuller faces. 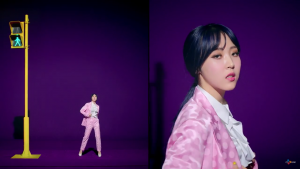 A lot of the visuals in the video suggest that things are supposed to be one way, yet Mamamoo turns them into something silly and fun. Wheein stands in front of a hot pink wall with dolls, shoes, and makeup products which are generally associated with femininity. However while Wheein acknowledges the toys, she’s having a lot more fun dancing weirdly by herself. The same goes for Solar, who though she’s shown working out, she’s opted to eat cheese puffs with a spoon instead of going for the vegetables in her fridge.

There’s also the subtle nods of rejecting typical standards in form. At it’s base, “Yes I Am” is a summer release which typically means a plethora of summer MV tropes– beach scenes, riding in cool cars down deserted highways, and more. Some of those tropes are turned on their heads in the MV, taking the tongue-in-cheek aspect of the song to the next level. For example, Moonbyul is seen with a quintessential yellow sports car, draping herself over it, but in the next shot she’s in a toy car playing around. Hwasa is on a beach chair surrounded by flamingos, but she’s in a silk robe and it’s snowing as she fans herself with a leaf.

“If I were to describe myself/I’m a confident woman.” The preceding two lines are the backbone of “Yes I Am.” They are the key message that Mamamoo is trying to get across. Despite flaws or quirks, Mamamoo are self-assured. They don’t have to follow fashion or classic beauty trends. They’re perfectly fine in the skin they’re in and they challenge you to follow their lead and be confident in yourself. 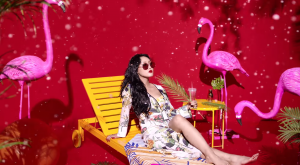 “I’m very cheeky” is the last line of the song. Beyond confident, beyond sincerity, beyond boldness, there is also cheekiness. In a way, it’s the most polite “I don’t care what you think” that can be said. It gives a hint of sarcasm to an otherwise sweet song. It’s a hint at the concept we talked about earlier — not the badass, in your face girl crush, but definitely not the saccharine sweet girl group you expect. All in all, “Yes I Am” is a decent song with a good message and a cute video. It doesn’t stand out in tide of summer releases nor does it truly stand out in Mamamoo’s discography.