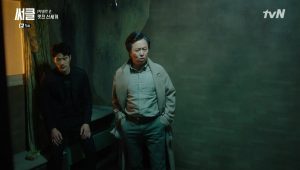 In its first four installments, Circle’s perplexing narrative format and potential deliberations of intriguing themes drew an incomplete, yet riveting image. While the series still makes use of a non-linear storytelling structure, this set of episodes turn the rough sketch drawn by the previous episodes into a more coherent picture. The semblance of a standard dystopian sci-fi plot structure emerges from this illustration: the Big Bad is unmasked, the characters who we’re supposed to be rooting for are made clear, and disjointed plot points are mostly outlined in.

Starting off, episodes 5-8 provide a handful of information connecting isolated plot points. We learn that Song Young-kyu‘s Professor Han Yong-woo is conducting a series of unethical experiments in order to re-obtain the information he lost in a series of similar experiments many years ago. Woo-jin and Byum-gyun’s father, Kim Gyu-chul (Kim Joong-ki) was Han Yong-woo’s partner in those early experiments. His current whereabouts are unknown, which is a disadvantage for Professor Han, since Gyu-chul hid their research files for reasons unknown as of now. 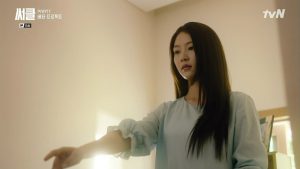 A side effect of these experiments were the suicides of the unwitting lab subjects (prompting the Handam University killings). The blue bugs crawling out of the deceased students were a creation by Professor Park Dong-geun (Han Sang-jin), and they appear to be some sort of prototype for memory blocking. We also learn that Byul, or Han Jeong-yeon, was the catalyst for these experiments. Professor Han reveals that Byul had the ability to store memories in video files, block them as she pleased, and even possessed the capacity to analyze human beings. He goes as far to proclaim that her special abilities had the power to eliminate crime and create a “grand, brave new world.”

This gives us a clear picture of how things ended up the way they did in the future. Evidently, professor Han (or someone else who got ahold of his research) started Human B along with Smart Earth. Jeong-yeon felt guilty for the role she played in this occurrence and consequently took on the role of Bluebird, in order to hack into the Stable Care System and correct people’s memories. Despite the reveal of all this background information, some minutiae is not yet fully explained — it’s not made completely clear why the experimenters also use the bluebird logo, what exactly the blue bugs are meant to do, why Kim Gyu-chul left his kids or where he went, and what the purpose is of the mysterious star security camera gadget at Gyu-chul’s old house. 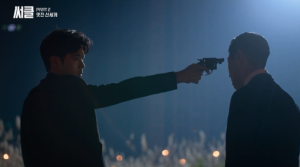 Even though the background information was enticing enough to lock in viewers’ interest, a plot twist makes the show even more engaging. We are lured into complacency by Park Dong-geun. The drama leads us to believe him to be Joon-hyuk’s ally, as he saves him from the clutches of Human B and puts on a convincing act of concern about Woo-jin’s disappearance. However, there is a quick turnaround in episode 8, when he is unveiled as the chairman of Human B. Everything he did is uncovered to be a set-up in order to gain Joon-hyuk’s trust. Circle forgoes any kind of foreshadowing or hints leading up to this revelation, which makes it all the more unexpected and sudden. Han Sang-jin puts on a convincing performance; he switches between Park Dong-geun’s virtuous public persona and his more covert sinister face with relative ease, making his character especially compelling. 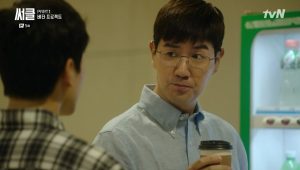 While there Park Dong-geun is revealed as the true villain of the series, the others whom we initially thought to be villains are given depth. For instance, Lee Ho-soo, who originally opted to betray Joon-hyuk by colluding with Human B to catch Bluebird, is shown at first to be ruthless in the pursuit of getting his memories erased. He even asks to get his Stable Care chip removed in order to shoot Joon-hyuk. However, in the end, even without his emotions inhibited, Ho-soo is unable to pull the trigger. We are reminded of the innate human compassion he possesses — emphasized in his past memories with his girlfriend —  of which was temporarily repressed by his unrelenting quest to erase his memories.

Professor Han is similarly given a sympathetic portrayal. His scenes where he confronts Woo-jin and Jeong-yeon show how obsessive he has become with recollecting his research data, almost driven to the brink of insanity in the feverish hunt for knowledge that could possibly alter the course of humanity. He is depicted as a desperate and overly zealous scientist lost in the clutches of scientific pursuit, rather than a calculating villain, which provides a sharp contrast to his colleague, Park Dong-geun.

Even so, it’s now apparent that the audience is supposed to root for Ho-soo, Joon-hyuk, and Jeong-yeon while wishing for the downfall of Human B and its creators (Professor Han included). Although this clear-cut dynamic can generally come off as hackneyed, Circle avoids becoming cliche by coloring in Ho-soo and Professor Han with different shades of black, white, gray, and other hues outside of this monochromatic spectrum; detailing in an anti-hero and an anti-villain that, albeit still clearly falling under good-guy and bad-guy distinctions, doesn’t fit into these categories as neatly as one might expect. 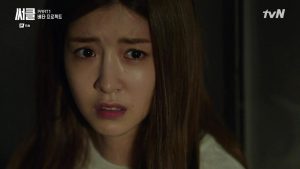 A new supporting character is also introduced, Min-young (Jung In-sun), who is a longtime of Joon-hyuk/ Byum-gyun. Her young adult self seems to have some kind of mental disorder or brain trauma that somehow disappears in the future timeline. She also appears to be one of the uninformed subjects in Professor Han’s experiments, and is equally worried as Woo-jin about Byum-gyun’s disappearance in the present timeline.

With the addition of this new character and all of the focus on developing some of the other characters, there is understandably less focus on the main character, Woo-jin. In the future timeline, he isn’t even present since he went missing. Hopefully, the upcoming episodes properly explain his and Byum-gyun’s past while developing their characters further.

Notwithstanding, if the plot and characters make up the basis of the picture itself, the themes and motifs add that extra layer of depth that creates a distinctive piece. And just as how art critics love looking for the deeper meanings behind the pieces they look at, reviewers such as myself enjoy chewing on the complexities behind the shows we watch — especially in the case of Circle, a drama whose subject matter hints at an in-depth exploration of themes. Unfortunately, Circle falls a bit short in this regard during episodes 5-8,  grossly simplifying some of the themes it could have examined. 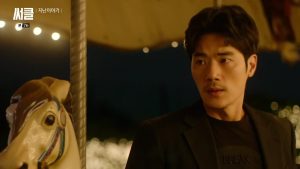 I mentioned in my first review that I thought it would’ve been interesting if the show explored what true happiness really was, and if losing one’s bad memories actually achieved it. The drama went a different route from what I expected. Instead of having Ho-soo undergo his own Guy Montag-esque realization that he isn’t truly happy, the drama has him acknowledging through meeting his currently deceased girlfriend’s abusive father (who forgot about the abuse due to the Stable Care System) that bad memories serve justice by forcing people to own up to wrongdoings. Ho-soo has to explain this to Joon-hyuk, who briefly undergoes his own change in philosophy after he finds out that Woo-jin found him with a genuine smile many years ago when he first lost his memory, contemplating about whether his own previous convictions about memory really held significance.

This is a pretty simplistic take of the role bad memories play in people’s lives. This line of thinking neglects bad memories that aren’t the responsibility of others. For instance, someone may have suffered from a mental disorder in the past and got cured, but got their memory erased because of it. Or, perhaps they had a miserable teenage life due to poor social skills. There is no responsibility to be taken by other people in these kinds of memories, yet they are arguably still extremely important in forming one’s identity. But maybe this idea will be touched upon when we get to know a bit more about Min-young.

Circle briefly mentions memory’s relation to one’s formation of identity in the first four episodes, when Joon-hyuk expresses grief over the fact that he is currently grappling with his sense of self due to his lost memories. Disappointingly, episodes 5-8 doesn’t flesh out this idea any further. 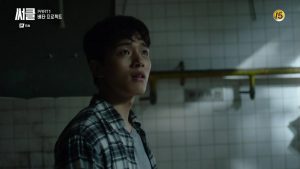 As discussed earlier, the series also discloses that Woo-jin discovered an amnesiac Byum-gyun with a genuine smile on his face. Although this discovery hints that memory loss does offer true happiness after all, there is no further exploration into this idea. Is true happiness actually about being able to offer a care-free smile after forgetting all the bad events in your past? Or is it having a clear sense of self? These are questions I hope that Circle‘s later episodes will examine.

The drama fares a bit better on its other theme, the correlation between criminality and emotion. When Ho-soo takes off his care chip, there is nothing to prevent him from assaulting his deceased girlfriend’s abusive father, and he takes full advantage of this. Nonetheless, in the earlier scene, where he tries to shoot Joon-hyuk but is unable to in the end, he hesitates, when he very well could have grasped the opportunity to harm Joon-hyuk without the chip inhibiting his volatile emotions. This suggests that criminality has more complex causes than simply negative emotion. 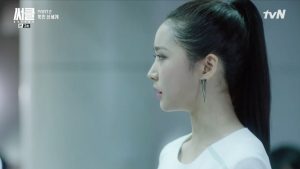 The editing adds nice touches to the overall show. In some of Ho-soo’s flashbacks of his girlfriend and a few of the characters’ conversations, the scenes are tinted in yellow, while the more intense scenes are tinted in a greenish blue. A lot of the scenes are colored naturally as well. This color grading does a good job in setting up the mood, as the greenish-blue scenes portray a sense of intensity during important scenes while the yellow is more introspective.

The usage of the night and day transitions also become reversed, as night is used for the future while day is used for the present. This could be due to how the corruption and flaws of Smart Earth and Human B in the future are laid bare and exposed, in contrast with the past several episodes, where the future’s bad aspects were only beginning to become apparent.

Lastly, I have to include a special mention for Lee Gi-Kwang. In general, this drama has a pretty solid repertoire of actors. However, as an idol and not a full-time actor, per se, I wasn’t really expecting much from Gi-Kwang’s performance — especially since I’d never seen any of his other dramas before. Nevertheless, his realistic portrayal of Ho-soo’s conflicting emotions pleasantly surprised me and definitely made his character more interesting. In the scenes where he agonizes over his memories of his ex-girlfriend, the visceral emotions of fear, anxiety, and confusion are really depicted. And in the scene where he points a gun at Joon-hyuk, his character’s raw, intra-personal conflict is almost palpable. 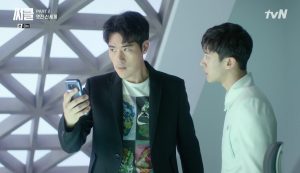 When we reach the next set of episodes and all of holes in the plot are filled in, I’m curious as to what direction the creators will take this show. One would think that after the questions are all answered, the show will finally delve into its cerebral side and focus its attention on the exploration of underlying themes while continuously employing its unique storytelling style to add an element of interest. Or on the other hand, the creators might begin to rely solely on the narrative format to surprise viewers with plot twists while neglecting the potentially thought-provoking motifs and themes drawing smoke from sitting on the backburner for too long. I’m choosing to give Circle the benefit of the doubt and trust that it does the former.