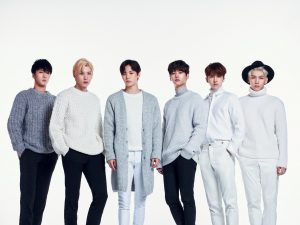 Plagiarism is no stranger in the entertainment industry, that’s built and developed from rehashed ideas and borrowed creativity. To be plagiarized or to plagiarize isn’t exactly an anomaly in one’s career, but to be plagiarized by different artists around the globe for five months in a row is undoubtedly a huge feat. Strange as it sounds, VIXX is hit with an ill affinity with people plagiarizing their work, with five instances in 2017.

Plagiarism is the act of taking someone else’s work and passing it off as one’s own but it can also be stretched beyond that. It’s important to note that Copyright Law only protects the tangible medium of expression of an idea, rather than the idea itself, or any associated processes or principles. A cover or sampling of someone else’s material isn’t necessarily plagiarism, which is why many songs these days are safe from being labeled as rip-offs, but the lack of attribution will hurt.

The whole fiasco kick-started in January when VIXX’s “Dynamite” was blatantly ripped off by Kursun, a Turkish rapper and contestant on The Voice Turkey. He had performed his song, or rather VIXX’s, without any proper credit to the latter. This is where copyright infringement of ideas of a copyrighted work comes into place.

Did Kursun need permission to use the instrumental on TV and to also claim it as his own? Yes. Did he ask for permission? No.

Kursun had defended himself against Starlights’ backlash by saying, “This isn’t stealing, it’s creativity.” Dissatisfied with his lackluster statement, fans continued to berate him and he calumniated young K-pop fans for having an “inferiority complex”.

Andrew Choi, one of the composers of “Dynamite” affirmed that Kursun had not reached out to him to seek permission for the use of the instrumental. Although Kursun had simply used the instrumental as a competition piece and not for profit, flagrantly “borrowing” someone else’s copyrighted work and calling it his own still doesn’t counter the fact that it is a violation of copyright laws.

Alas, Kursun was forced to make a public apology before getting booted off the show. Though the judges were forgiving, Kursun proved that he sure wasn’t by releasing a diss track titled “Shit Storm”, which mainly disparaged a particular fandom. Coincidence? I think not.

Who knew that the controversy in January was a foreshadow of the following cases. On February 2, TVBOYS, a Chinese project group for a 2017 New Years Special program on QTV-1, was thrown under the bus for duplicating VIXX’s “Heroes of the Remix” performance. The choreography and vocal distribution in TVBOYS’s performance were identical to that of VIXX’s, but no credit was given. If you listen closely, you can even hear Ken belting his part.

The line between a cover and outright plagiarism is unclear here, since VIXX themselves had performed a remix of Lee Jung-hyun’s “Wa” and “Bakkwo”, but the least TVBOYS could do was to give credit where it’s due.

However, this disservice isn’t something new from the Chinese entertainment industry, which is heavily influenced by South Korean’s, and thus frequently plagued by plagiarism. In April 2017, a Chinese advertisement company was condemned for allegedly plagiarizing Twice, for using similar color tones and poses, as seen from their concept pictures for “Knock Knock”. 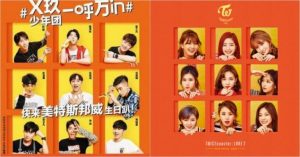 Moreover, Yonhap News had also reported that at least seven Chinese variety shows in 2017 are illegal copies of Korean ones. Formats of popular variety shows like Running Man and Infinite Challenge were also “borrowed” to produce their own versions.

In response to this, Pen Kan, director of Legend Media’s development and consulting department, explained that:

“The nature of these copyright wars is the homogenization of Chinese entertainment show producers. Besides that, the idea of entertainment shows is not protected by the law, so copycats might only face public criticism, but nothing else. Seduced by the huge potential profits, it’s always worth a try.”

When Mnet released the profiles and self-introduction clips of the Produce 101 Season 2 trainees in March, netizens didn’t fail to notice that the modern dance piece by HF Music Company trainee Jung Won-chul was identical to N‘s solo performance at their Live Fantasia Elysium concert.

The screaming of fans, supposedly Starlights, at the end of Won-chul’s performance further proved that he had recycled both audio and choreography of N’s for his own benefits.

Using a phrase by an author you respect without providing proper citations in your essay could easily result in plagiarism and a jeopardized grade. Similarly — though it is arguable that it was just a cover and out of respect for N — neither Won-chul nor his agency had the basic courtesy of crediting N for his performance. Thankfully, they were prompt with their apology which resolved things swiftly.

Moving on to April. It seems like the funky sonic sound of “Dynamite” has taken the world by storm, literally. This time, Egyptian singer Reda Mandor had insolently ripped off its instrumental track. His song “Ala Allah El Tasaheel” is featured as the opening track in his album on iTunes.

It’s not plagiarism if one has permission to use the work of another, but I highly doubt that Reda Mandor owns the rights to use “Dynamite” or make a profit out of it. What’s even more appalling is knowing that he had given himself full credit for the composition and music arrangement of the piece. Until today, Jellyfish Entertainment and Reda Mandor have yet to make a comment. Though the latter had removed the video off YouTube, the song is still available for purchase on iTunes. 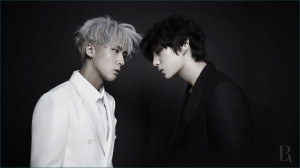 Third time’s the charm? Scratch that. When VIXX was hit with their fifth apparent plagiarism allegation, now by a Chinese artist, they were done keeping mum about it. Fans had pinpointed the similarities between subunit VIXX LR’s “Beautiful Liar” and an OST for Chinese film Father and Son. Having co-composed the song, Ravi took it to Twitter to address his concerns on May 21.

“The phrase ‘I want to become a trend’ does not mean I’m telling others to take my music and copy it, and to disregard and hurt our fans. When making music, there is a clear difference between being influenced by something by using it as a reference and simply pasting it in.”

Despite Starlights’ constant pressure on Jellyfish and VIXX to speak up and take legal action against the previous plagiarism allegations, they had chosen to remain silent all this while.

It’s almost effortless to pick up the similarities within a few seconds into the song, as though the composer had merely lifted sections from “Beautiful Liar” to recreate the OST. Sure, similarities in music is a norm, because how different and unique can melodies be? However, for plagiarism to kick in, the song cannot just sound similar, it also has to be substantially identical.

Finally, Jellyfish has stepped in and announced that they have submitted a request to Korea Music Copyright Association and would take action accordingly. They are still waiting for the results to justify whether the song is indeed mimicry.

This brings to mind the controversy of Taeyang’s “Eyes, Nose, Lips” with Russian singer Albina in December 2016. There’s little question that the melody and arrangement of Albina’s “I Love You”, apart from minor tweaks, is a carbon copy of “Eyes, Nose, Lips”.

By making some adjustments in a song, one can skirt around the law and loophole their way around plagiarism. Most, if not all, musical works are copyrighted. Copyrights can be sold or transferred to another party, which is something that SM Entertainment has been doing, an example being f(x)’s “4 Walls”, which demo was sung by Phrased Differently and produced by LDN Noise.

So what’s up with VIXX and plagiarism? Is getting plagiarized a sense of validation for the artists? To go to the extent of copying someone and their work, it shows some sort of acknowledgment and recognition of their efforts and musicality. Well, they say that imitation is the best flattery. Despite that, to have your hard work ripped off and stolen every month without fail is sure taxing – and that’s an understatement. 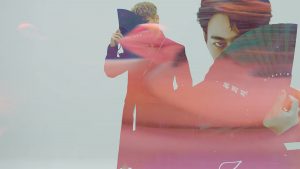 All these copycat allegations have united and spurred Starlights to trend #JusticeforVIXX and #VIXXDeservesBetter on Twitter, pressuring Jellyfish into taking legal action. Nevertheless, little time and energy should be wasted in combating plagiarism, especially for fans because while it’s an offense, it’s also impossible for such acts to go extinct. When plagiarized, the owner can either contact the infringer to remove the material for a painless (and less expensive) resolution. Or he can file a lawsuit. Copyright infringement can easily cost the infringer millions, based on the degree of infringement and the financial loss incurred by the plaintiff.

K-pop is a genre that often plagiarizes and is often plagiarized. VIXX is merely dismayed with the bleak misfortune of facing a glut of plagiarism allegations. That said, it definitely proves their commendable talents and flair for an artistic catalog and creative concepts. Currently promoting “Shangri-La”, let’s hope that there wouldn’t be a six case in June, fingers crossed.

What do you think about VIXX being plagiarized for the nth time?