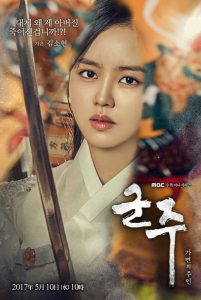 Maybe it’s the format or just the pacing, but we’re a third of the way through Ruler: Master of the Mask and while the body count has been climbing with every episode, not much is being done in the way of plot progress. Even with a 5 year time skip, we’re faced with half an episode of pandering and lots of questions about characters beside our protagonist. So this week, instead of picking on the Crown Prince, I want to focus on our female characters and the roles they play in this drama, starting with the Queen.

This review contains some spoilers for Episodes 9-12. We kindly ask that readers use spoiler tags in the comments when discussing the episodes that have yet to be reviewed.

Up until this point, the Queen was just a side character, relegated only to small scenes in which she showed undue kindness to others, such as when she intervened on Hwa Goon’s behalf after the girl wandered into the Crown Prince’s greenhouse, or when she included the Crown Prince’s mother in the choosing of the Crown Princess (where is that storyline, btw?). Her scenes with the now deceased King showed her as a subservient woman. 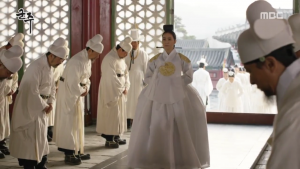 This week, however, that all changed. The Queen is revealed to have her own reins of power, with ties to the military and a family member in the Pyeonsoo-hwe who may be more loyal to blood than this extracurricular group. She manages to defy Dae Mok for 5 years by holding the regency of the country, 2 years longer than she should have been able to. She also shows her cunning in discerning that Lee Seon is not the true Crown Prince, yet knowing to wait for the right moment to announce her regency, thus foiling Dae Mok and showing that she will not just let him do as he pleases. The fact that Dae Mok will not outright kill her shows that she still holds more worth alive than dead, despite the other plotting to weaken her.

Whether she will continue to play a big role in coming episodes remains to be seen. She is obviously willing to help Lee Seon act the part of King, even if it is only to advance her own agenda and annoy Dae Mok. However, she is playing a proactive role unlike one of our female leads.

Yes, I mean Ga Eun. I want to like Ga Eun, I truly do. She has all the makings of a great protagonist: she’s pretty, she’s smart, she has a trade, and she’s seen as a leader among the people. Aside from Lee Seon’s sister she appears to be the youngest person in the village, yet she inspired all the adults to not give up on their situation and turn a flat expanse of forgotten land into a thriving market and town. She helped set up businesses and when those businesses were in danger, she set out to find a solution. She even has the strength of will to stand up to Jo Tae-ho when he threatens the villagers in the name of the Yangsucheong when others cower before him. There’s even an instance of her holding a sword to his throat in defense of her own life.

And yet, much like Ah-ro in Hwarang, Ga Eun is constantly being forced into a damsel role so that the love line 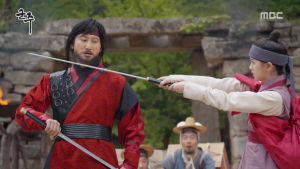 between her and the Crown Prince can be perpetuated. She has a whole life outside of him. In five years she’s become a respected and loved member of her community, with a standing of her own despite the reputation her father’s trial has left for her. Instead of taking Kkol Mool’s wise advice to get over her first love and move on to someone else, she spends half a decade pining over him. Then, when she is on an important mission to find the chief peddler to help the townspeople repay their debts, she loses focus on her task because she’s too busy trying to force the Crown Prince to accept that they know each other instead of properly asking for help.

What annoys me to no end is that Ga Eun has so much potential. She managed to escape the palace in the middle of a massacre. She figured out that there was more to her father’s trial and execution than what she was presented. She’s shown she has a head for business and medicine. But all that becomes secondary to her being the Crown Prince’s love interest. It’s so frustrating because it’s a drama trope that is never done well. We already know how their relationship is going to play out. Why do we have to see them push and pull over the course of 40 episodes? How are they this in love when they’ve hardly spent time together? Not only is it annoyingly cliched, it doesn’t make sense nor does it move the plot along.

It is becoming apparent that nothing Ga Eun does can be impactful without it leading back to one of the Lee Seons. Going to find the chief peddler was merely a plot device to get her and the Crown Prince together as he already had plans to come to the capital. Next week’s preview shows that the imposter Lee Seon intends to confess, making her plan to get into the palace to check on him nothing more than a chance to force upon us the weak love triangle started in Episode 3. Honestly, Ga Eun deserves more. 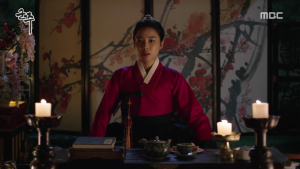 In comparison, we have Hwa Goon, who has taken more for herself. She cared so much for the Crown Prince that unbeknownst to him she helped him fake his death to get her grandfather off his case. She was devastated by his disappearance and has apparently broken ties with her grandfather over the whole ordeal. Instead of wasting away, she has spent the past five years building a name for herself as a merchant. She’s learned fluent Japanese, has her own informants and underlings, and has made a tidy profit–enough so, at least, that not only does she have enough money to pay off the Yangsucheong when they come calling for debts, but advises those in her network to avoid further borrowing from them.

Hwa Goon also shows a more active role in her life in general. From interactions between her father and grandfather, she was likely to be named Dae Mok’s successor. However, because her grandfather “killed” the Crown Prince, she’s gone her own way. She still has Gon’s loyalty and we only know a little about her business, but she’s built up her own money and power base. We already know that she’s conniving, so it’ll be interesting to see if she will be an integral part of bringing down her grandfather and the Pyeonsoo-hwe.

Yet Hwa Goon has some of the same shortcomings as Ga Eun. While the Crown Prince was “dead,” Hwa Goon was thriving. She may have been wondering how he’d disappeared or where he’d gone to, but she was making something decent out of her life. She wasn’t wasting away. Yet, the minute she recognizes the Crown Prince and he acknowledges her, she’s ready to up and follow him anywhere. Though she claims to already have business as her reason for accompanying him to the Bureau of Trade, her sheer joy at being by his side is quite obvious. She’s like a dog who is happy that her master has returned home. We know she is stronger than that, yet she’s reduced to a mere caricature of herself simply because there’s a handsome man around.

Finally we have Mae Chang (Lee Chae-young), who is an enigma as of yet. Presented as an entertainer while Hwa 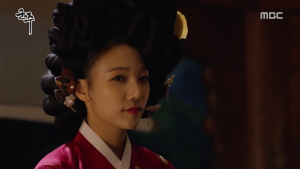 Goon is helping the Crown Prince track down the cause of the copper shortage, it quickly becomes clear that there is more to Mae than meets the eye. The last glimpse we get of her is a complete 180 from her introduction. In the last few moments of the episode, she’s engaged in a fight with the Crown Prince after he’s found her in Hwa Goon’s father’s quarters. She’s been looking for information and has stolen some money, so is she a spy? Whose side is she on? We won’t know for certain until next week. What we do know, however, is that she can certainly hold her own and any woman who can do that is a good one in my book.

With the limited number of female characters, it would be nice to have them stand out more. The main plot may be about the Crown Prince’s rise to the throne, but these women are a part of that story. Therefore, they deserve to be written in a way that doesn’t downgrade them to crazy, love sick, or power hungry. They need the same nuances as the men, to have a drive besides “love,” in order to be more well-rounded. Because let’s face it, it may be man’s world, but the women are doing so much behind the scenes to keep it running.

So readers, how are you feeling about our female portrayal so far? Are you begging for more depth, as I am, or are you eagerly watching to see how the tropes will play out?