Minzy Comes Out Swinging in "Ninano" 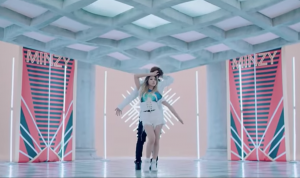 After what seems like far too long for fans, Minzy has made her solo debut with“Ninano.” Having finished up her contract with YG and signed with The Music Works, this music video shows a new direction for Minzy while building on recognisable and reliable themes. Even better, both the song and the music video put the emphasis solidly back onto Minzy as an individual and her passion for dance.

Looking at the visual aesthetics, the theme of dancing is identified and catered to from the get-go. There are dance sequences with back up dancers as well as scenes of her dancing in front of the mirror. The mirror scenes are both interesting and a little different as we barely see her face; just her body moving and her hair whipping about. It highlights Minzy’s new persona and brings the focus onto the dance, reinforcing the topic of the song.

There are many common visual concepts here although the video doesn’t rely solely on any one aspect, and they are often found throughout the music video more or less evenly. For example, we see the televisions at the start, but they’re not overused, and they appear in the background and towards the end of the clip for consistency. We have the derelict “shop front” style dance stage complete with advertising sign – here the word “Paradiso” links back to her repeated mentions of paradise: “a paradise in my dreams”, “a paradise in the clouds”, “our paradise” and “paradise above the sky”.

In addition, there are some fairly par for the course dance stages, a grungy looking tunnel and lots of fences. None of it is particularly original, but there are enough elements put together reasonably well to catch the eye and remain interesting. The fairly grey and colourless set, together with the steel security bars, temporary fencing and caged in televisions successfully hint at a slightly ‘tough’ look, without making any bold claims. 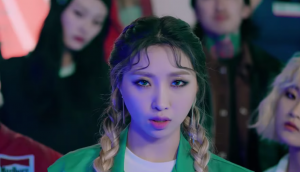 The costuming complements the set particularly well. Without being troubling, it gives casual nods to other popular costuming concepts in the last few years. Minzy rocks the glasses, and the dollar sign earrings and long braids are a little like Hyuna in “Roll Deep”. That said, she is clearly distinguishable from Hyuna by her sound and dance style. Her jump suit is reminiscent of Lee Hi’s “1,2,3,4” but Minzy manages to own the look and make it hers. Her ripped jeans and working boots in her dance sequences and the green jumpsuit fit the ‘rough’ feel to the set, while her makeup is consistently flattering without being overwhelming. The cincher she wears with her white shorts is quite interesting for a costuming focal point during some of the dance scenes.

While there was no real story to speak of, the scenes are varied and interesting enough that we don’t have the sensation of being trapped in a box. For all that they’re commonly used themes in K-pop videos, each set has a slightly different feel. But do the themes match? Minzy’s song is almost a club beat and her lyrics are about a dancing paradise, yet her music video resembles the kind of fierce and confrontational set we might see from a rapper or a song about heartbreak and desolation. Aside from the dance itself, where does the set link to dancing? If we’d seen her and her crew breaking into a club or going to an underground rave and dancing the night away, it might have been able to bridge the gap between the song and the video. 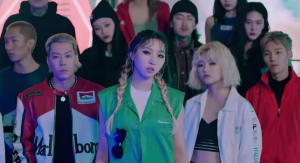 All through the video, Minzy starts strong, with a ‘cool’ vibe, and powerful, standout dance moves. In particular, the point where she’s up against the wall shaking her fingers almost chidingly is one of the scenes where we see the most personality from her. Her quick close-up scenes in the beginning are generally convincing, but the further we go, the more it seems to slip away from her. The close-ups feel progressively more forced, and go from cool to stilted. In the scene where she’s the focal point, in front of her crew, we go from stilted to borderline awkward, and her crew seem to be suffering from the same condition, most notably the man to her immediate left. If these are genuinely friends of hers, it would make for a positive, almost cute spin without needing any real acting, but if they’re not, it would be better not to pin such drawn-out emphasis on them, especially since they aren’t dancing and don’t serve a clear purpose.

While her reference to her dance history is a positive, the crew and their positioning seems like a nod to “The Baddest Female” MV by CL, but without the level of confidence, or famous entourage. In fact, does anyone know who they are? Are they just random actors? This contrast detracts from the clip rather than contributing positively to it. To me, what Minzy lacks is charisma, and instead of disguising it like the quick, choppy editing at the beginning does, they hold the focus for too long and she doesn’t yet have the acting experience to pull it off. 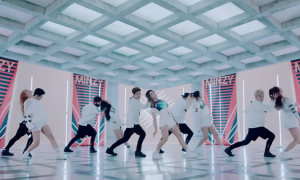 As for a song about dancing, the dancing itself was quite effective… minus the attempt at twerking. It seemed to successfully straddle the line between powerful moves befitting a dancer and moves that fit the more-subdued song. I adored the chorus choreography which went well with the “Ninano” refrain, where her knees were the focal point of the dance. I thought that the whole section was quirky, original and matched the background music well. Her backup dancers generally complemented her without being obtrusive, but it would have been good to see more of the female dancers alone with Minzy, because those scenes were great.

The twerking however, inserted seemingly without real purpose, felt forced. Additionally, the move where she leant back and her dance partner pushed her forward seemed awkward and without context, musically, lyrically and dance-wise. While I’m not sure that her “tough” and edgier aesthetic complements the song, the dance itself fits the set and costumes well, whilst also being the obvious link to the topic of the song.

Musically is where I feel this solo debut falters a little. Slick production and a catchy backing track are offered, and the song did have some variation, but was it enough? Minzy’s vocals are strong, and she’s a talented singer but are the vocals a good match for the track? At times I felt they were bland and lacked charisma. This was especially apparent within each section: the verses are quite monotone and the lead up to the chorus, while more varied, didn’t have enough build up and power to stand out when the chorus itself is so plain. A powerful vocal line or section was needed to break up “Ninano” – especially when we know Minzy is a talented and capable singer. In some ways, the music video made this worse as I expect more vocal build up, variety and energy from an edgy, powerful song than I would from a track with a clubbing video. 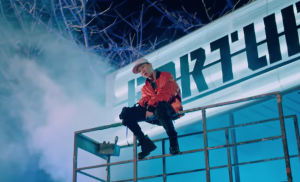 Flowsik was a good addition as a strong rapper with a pleasing voice and good timing. He injects some much-needed variation to the song, and carries himself confidently and plausibly as a guest rapper. In the dance scenes however, possibly deliberately, it felt like Minzy disappeared behind Flowsik too much. Instead of standing confidently by his side, in her white costume she looks a bit like a back up dancer during his part. It would have been good to see them interacting more and being a cohesive unit, rather than two separate elements.

Minzy came out swinging with “Ninano” but I felt like she didn’t quite hit her target. That said, given the unclear themes, it’s possible not even she’s sure what she’s aiming for. Overall, I liked it, but I felt there was something important missing both from the song and from the clip in terms of direction and charisma; hovering just out of reach. I hope to see it developed further in future releases, but in the meantime, I’m glad we’ve gotten more of a glimpse of the ‘real’ Minzy.

‘Uno’ Shows us Where Minzy Belongs