Lovelyz Attempts to “WoW!” Us

As a casual listener of some of Lovelyz’s more recent releases, I really enjoy their characteristic classic and complex sound. For a group that could be considered to have experienced moderate success, Lovelyz has found a unique style that suits them and have more or less stuck to it. Their newest title track belongs to the album R U Ready?, which consists of 11 songs that features their subunits as well. As they return with “WoW!”, the girl group seem to have built on what they know best, mixing in hints of cutsey pop to appeal to the general public.

“WoW!” opens with light synth instrumentals that alludes heavily to bubblegum pop and fits in perfectly with their bright and fresh concept. The opening verse is very much inspired by public-friendly pop, which makes sense considering the success of this genre for other girl groups. What is perhaps most intriguing, though, about the initial verse, is the very stagnant melodic line — the contours of the melody stay within a small interval of pitches and is only accented by the “wow!”. It does veer on the side of monotonic, but it’s also charming in its own right.

The chorus, however, does a complete 180 as draws on a higher register with an intricate and lyrical melody. One of the things that contributes to Lovelyz’s aforementioned classic and complex sound is their use of harmony that has a cinematic feel to it. This is exactly the case with “WoW!”, which draws minor harmony to generate musical interest and depth.

It works effectively: in the world where bright girl group concepts are abundant, major harmony is heavily preferred as it matches the cheerful mood. Using minor harmony is a complete reversal of listeners’ expectations, but strangely enough, it works to create mystery to the otherwise charming song. One of the most enjoyable moments is the hook after the second iteration of the chorus with Jiae and Kei: it is a ray of bounciness that flows well within the track. Overall, the instrumentals for the song are kept light and thin, without the use of heavy bass lines that adds to the track’s brightness.

The lyrics are equally as quirky as the melodies, with a well-placed “Pop!” and “Wow!” placed here and there:

I will put my heart

One can’t help but notice, though, the jarring similarities between “Wow!” and Lovelyz last title track, “Destiny”. The use of minor harmony and the melodic lines are very similar. In fact, if a mashup were to be made with the two tracks, it would probably flow so well that it would seem like an original song instead of two distinct tracks. On that note, it’s a little disappointing to hear the disguised recycling of the group’s previous musical material — surely, they can come up with original songs, no? 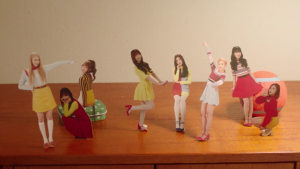 The accompanying music video actually reminds me of Got7’s “Just Right” with the whole concept of miniature versions of the members, only this time, it’s in paper doll form. The interplay between the normal-sized members and their tiny counterparts is downright adorable, like when the Sujeong-doll jumps from a book on the shelf, normal-sized Sujeong lands on the floor or when shots of the members dancing are interspersed between the paper dolls performing the same choreography. Cartoon “pop!” bubbles are added during the corresponding lyrics; and towards the end of the music video, there are scenes where multiples of a member clutter the room holding different poses. It’s a unique play with the visual effects that adds a dimension of modernity to the release.

“Wow!” isn’t a terrible song, but it’s not one that makes me go “wow!” over either. While the quirky twists in this release are enjoyable, it’s simply a little too similar to some of their previous releases. Overall, it doesn’t pack a strong enough of a punch. That being said, “Wow” still stands apart from some of the similarly-styled girl group releases this year, and I will definitely be keeping up with Lovelyz a little more to see what else they will show us!