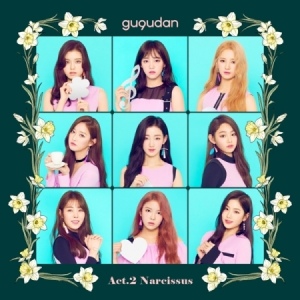 Gugudan is back with their second mini-album and things are looking up for them. If the album doesn’t impress you the first time around, give it another go — Act 2 Narcissus has the curious ability to grow on you. With their debut album, Act 1 The Little Mermaid, the nine-member girl group had failed to garner much attention despite having two members, Kim Se-jeong and Kang Mi-na, promoting with I.O.I around the same period. Jellyfish Entertainment had failed to leverage on the girls’ strengths, opting for a concept that fell flat and buried the girls’ talents.

One year on, however, it is clear that both the girls and the company are now much more attuned with what could work for them. The improvements could possibly be attributed, also, to the exposure and experience that Se-jeong and Mi-na received while promoting with I.O.I, but regardless, this first comeback has no doubt provided a platform for Gugudan to shine.

The album begins on a rather upbeat note with “Rainbow”. Almost literally a song about the world being filled with happiness and rainbows and unicorns, “Rainbow” is befitting of Gugudan’s young, cutesy, and optimistic image, and the girls clearly have no problem delivering on this front. The title track, “A Girl Like Me”, which follows as a second track, however, challenges the girls a little with its added layer of sophistication. No longer are the girls as naive and sweet; they are now also a little more mature and a tad provocative. It was a great decision on the part of Jellyfish Entertainment to pick this song as the album’s title track — it is not only a very catchy single, but further stands as a comparison to Gu9udan’s debut track, “Wonderland”, and the juxtaposition highlights the girls’ maturation in both image and ability. 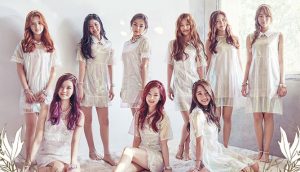 The third and fourth tracks of the mini-album, “Hate You” and “Street”, take the excitement levels down a notch. This has the unfortunate result, however, of rendering the songs slightly forgettable. They are not bad songs — but they don’t particularly stand out. “Street”, which discusses the idea of young love blossoming, makes use of the analogy of a street rather creatively.

We are shaking now; we are clearly in the same mood
We’re just like the footsteps
The ambiguous street between you and me
I want to get a little closer

The arrangement of the song, however, with its overemphasis on the drums, fails to bring out the emotions of the rather poetic lyrics. Where the song should have evoked a sense of anticipation and nervous excitement, all it did was create a rather mundane mood with a tempo too fast and too consistent. It really is a shame, with “Street”, because the song had some vague influences from R&B such as the undulations of its rather prominent bass line. Had the music stayed closer to the R&B style, it would, perhaps, have been able to intimate the ambiguous sentiments of the song better.

Nevertheless, the album still manages to end on a rather strong note with “Make A Wish”. Although its lyrics are sad, this final track comes across as rather soothing and warm, even. It tells of the girls’ wish to love their lover forever, no matter what, even if he never loves them back. As the only ballad in the album, “Make A Wish” perfectly showcases the girls’ vocal prowess; they really are quite impressive for a rookie group! Indeed, the album could have done with more than just one ballad.

Overall, with only five actual tracks and one instrumental track, Act 2 Narcissus successfully explores a range of emotions and highlights the girls’ ability to translate these emotions into music. It also emphasizes their proficiency in delivering different types of musical styles — the cute, the hyped, and the soothing. The only question that remains is how exactly does their album title relate to any of the songs at all? There is nothing in the album that alludes to narcissism nor Greek mythology. But, of course, these little details don’t matter too much.

With this second mini-album, Gugudan has definitely proven itself to be a group worth keeping a watch out for. With more hard work and some luck, we might just be looking at one of the up and coming fourth generation idol groups. Here’s wishing them all the best!