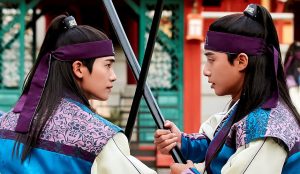 Following Leesha and Qing’s reviews of Hwarang‘s first eight episodes, Sarah and Gaya are here to discuss the show’s second act, particularly the progression in character development and narrative. Or, at least one of those…

This review contains spoilers for Episodes 9-12. We kindly ask that readers use spoiler tags in the comments when discussing the episodes that have yet to be reviewed.

Sarah: Well, we’re well in the thick of the coming-of-age plot now. Qing and Leesha started us off awesomely with a conversation of the character building of the first eight episodes, and now we’re starting to see those characters stepping back into action again. I agree whole-heartedly with criticising the slow pace of the first half of the show. We’re already at episode 12 and the plot is barely ramping up. I was disappointed in how long it took them to introduce all the side characters. However, now that all the plots are mostly in full swing, I’m definitely back to enjoying myself.

Gaya: I feel the same way about the pacing; as cute as it all is, the dance performance plot felt a tad overlong, and I’m still not completely sure what this fight-to-the-death storyline is about. We’ve had some great moments of development from the characters and their relationships, but the narrative side has unfortunately not been keeping up. Ideally you want both happening at the same time, with one driving the other. Hwarang has the opposite problem than Moon Lovers in that the narrative was favoured over character development; I honestly prefer having more character-driven moments, but at some point you want to move forward with the story as well. 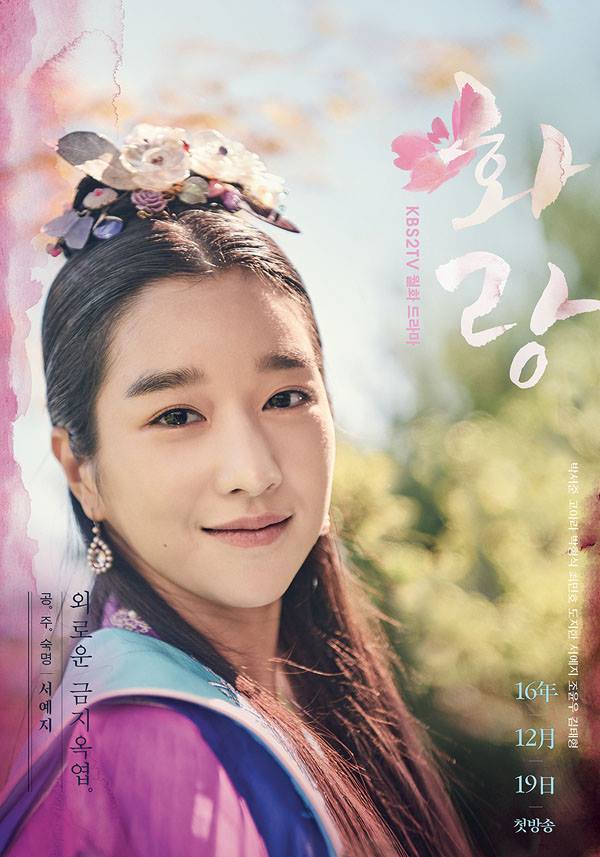 I was really excited for the addition of Princess Sook-myung (Seo Ye-ji) to the dance storyline, but nothing really came from that other than to add more pressure on the Hwarang. The stakes were already pretty high, that I don’t see how the Princess changed anything. And with the fight storyline, it felt more like the drama was simply spinning its wheels so that it could concentrate more on the characters for a while longer. This is in contrast to other characters like Dan-se (Kim Hyun-joon) and Kang Sung (Jang Se-hyun), who have already been introduced, but are now figuring in the plot in more significant ways.

With so many (handsome) men, I was looking forward to another female character — and while Princess Sook-myung is historical figure, the drama has yet to show me how she matters in context of the story being told here. It seems like she’s being set up on a journey to express more emotion, but I hope there is more to her story than just that.

Sarah, what do you think of Princess Sook-myung, so far?

Sarah: I agree mostly, in that I was very hopeful for the introduction of another female character to play off the men though she hasn’t actually played much of a role as of yet. Her character has been intriguing so far, and Seo Ye-ji’s acting has been pretty strong. She seems to be set up to play an interesting role alongside the evil Dowager Empress (Kim Ji-soo), but also possibly as a force to counter her. Though I’m not a fan of her blind hatred of Ah-ro (Go Ara), I hope they do flesh out her character and give her more real power over herself. I can see her being an integral part of the coming of age theme and really growing a lot before the end. Please, don’t just turn her into a romantic plot pawn!

Since the show has been focusing more on the character development rather than the plot, we’ve been re-introduced to a number of other side characters. You mentioned Dan-se, Han Sung’s (BTS‘ V) older brother, and also Kang Sung, the immature lackey of Ban-ryu’s (Do Ji-han) family. I’m generally a fan of larger casts and more characters since I feel it enables more breadth of emotion from the lead characters when they interact with a broader variety of friends and enemies. For example, we can already see a bit of Ban-ryu’s growth from when he looked down on Kang Sung but still kept him around to now that he knows something closer to real friendship, he doesn’t even want to give him the time of day. 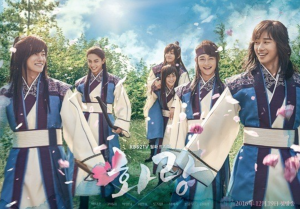 However, over the course of the first 12 episodes the main cast has grown from two young men (Mak Moon (Lee Kwang-soo) and Sun-woo (Park Seo-joon)) to five and a half (the Hwarang roommates plus the partial inclusion of the clingy Han-sung) to nine with the introduction of the Nando, and thus cementing the screentime of Dan-se, Kang Sung, and the King’s guard Pa-oh (Yoo Jae-myung). With the inclusion of the three young women, that’s a grand total of 12 characters to build, guide, and provide growth for. It’s a tall order, but not impossible.

How do you think the side characters are coming along, and which are you enjoying the most?

Gaya: I am absolutely loving the Hwarang boys, and their real/fake sisters! Bringing all these characters together has created unexpected interactions, like Dan-se and Pa-oh being the “same” age, and Ban-ryu’s blossoming romance with Su-ho’s sister, Soo-yeon (Lee Da-in). With the two rivals becoming closer, I admit that I’m looking forward to how Su-ho (Shinee‘s Minho) is going to react to this revelation. Considering my strong feeling that everything is going to turn out OK, I’m not too worried about any temporary fall out. I like how the slapstick humour of this plotline has been handled thus far, and hope it continues. My only gripe is with Kang Sung, who comes across as two-dimensional; and I fear with so many characters, he’s going to be the one that loses in terms of development, or redemption.

The character I look forward to the most, though, is the Dowager Empress. I’d naively pegged her as a well-meaning bt misguided mother and queen, so seeing more of her cutthroat nature has been a welcome surprise. While I think her recent antics aren’t as brilliant as those in earlier episodes, like strongarming the aristocrats into sending their sons to become Hwarang, I’m hoping for a return to form in upcoming episodes. The fallout from her manipulation of Su-ho, and Ah-ro’s father (Choi Won-young) re-entering her life should provide enough emotional material for the character; here’s hoping the narrative side is able to keep up as well. 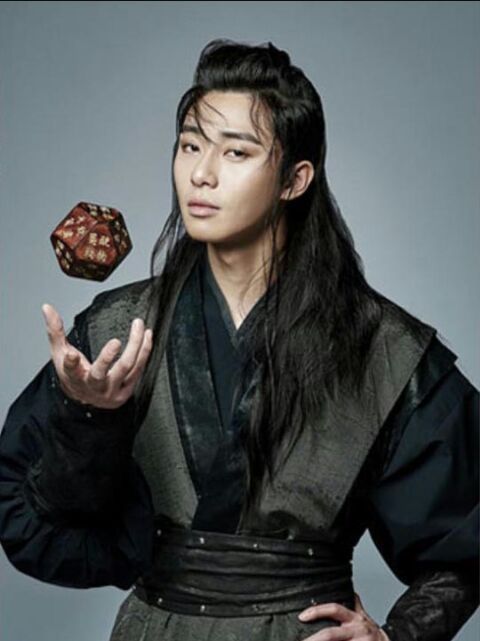 The other big mystery I can’t wait to unravel is that of Sun-woo himself. Though it could have happened sooner (with less time spent on the fauxcest plotline), I really do appreciate the gradual progression the arc surrounding his real identity has taken, from a nameless warrior also known as “dog-bird,” to dealing iwth taking on his dead friend’s identity, to now revealing his true history. This arc has also brought in another character, Hwi-kyung (Song Young-kyu), and I’m curious to see how his involvement will affect the narrative.

Sarah: The Dowager Empress has been growing on me as well. She’s clearly showing that she has much more than one set of motivations and is balancing the fine line between misguided, protective mother and stereotypical evil queen. It seems like she’s setting herself up to lose control, with the revelations around her relationship with Ah-ro’s father, so I’m looking forward to seeing how that plays out.

Aside from the antics between the groups of friends and their blossoming relationships, the mystery of Sun-woo’s identity is definitely my favorite outstanding plot line. The writers have been doing a great job of spacing information out between the subplots and yet not forgetting about it for too long. While at first, I hoped they would keep up the ruse of him taking on the identity of Sun-woo, and Ah-ro’s brother (and drop the fauxcest plotline), I’m intrigued to learn more about who he really is.

I’m still unclear about what role Hwi-kyung will play, and what his relationship with Sun-woo is, but it makes it pretty clear that Moo-myung is connected to the Sacred Bone in some way. I have my theories, but I’ll save them for after we learn more. I’m looking foward to revelations that could drastically change Sun-woo’s relationships with the other Hwarang, especially his slowly blooming friendship with Ji-dwi (Park Hyung-sik), and I only hope that it’s all given the thought and emotion it deserves. 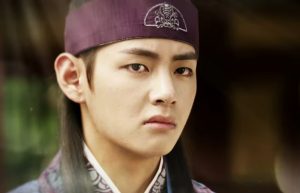 I’m also very much looking forward to learning more about Dan-se and Han-sung. The play between Dan-se and Pa-oh as “same-age friends” is hilarious. I’m glad we’re seeing more of the upright and serious military-arts master. Dan-se could use someone who can ruffle his feathers a bit, and Pa-oh similarly needs to be able to let loose, so they’re a match made in heaven. With Dan-se and Han-sung, we have two brothers who clearly love each other a lot and look out for each other, but maybe not in the way the other really needs. Again, this is a storyline that I hope gets the time and attention it deserves.

And we’re back to where we started – already more than half-way through the series and there are so many loose ends. Hopefully things will wrap up cleanly and satisfyingly, and not get lost in the number of sideplots. We’ll see if things pick up in the next few episodes.