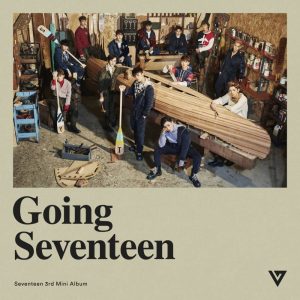 Seventeen is, indeed, very much at the heart of the new wave of K-pop idols that have been dominating the charts in recent years. While they might not necessarily be leading this new generation, the Pledis Entertainment group is very clearly a group on the rise. Only a year and a half into their career, the thirteen-member group has already bagged several awards including ‘Best Star Award’ at the Asia Artists Awards and ‘Best World Performer’ at the 2016 MAMAs.

Six months after the release of their first full album, Love & Letter, Seventeen has come back with their third, rather impressive, mini-album, Going Seventeen. If you enjoyed Love & Letter, you would be very pleased — and suitably impressed — with Going Seventeen. In listening to the whole album in one sitting, one of the most impressive points of Going Seventeen is the fact that the listener never feels bored — which is really no mean feat at all. Each and every single one of the eight tracks engages the listener in its intended way, and the appropriate ordering of the tracks within the album further enhances this listening experience.

The album begins with “Beautiful”, performed by a mixture of members from all three units — Joshua, Dino, Dk, Mingyu, Hoshi, and The8. As an opening track, the song is suitably upbeat and warm, perfectly reflecting the boys’ bright and bubbly personas. Next, we have “Boom Boom” which takes the excitement up a notch. Following the title track, “Highlight”, by the performance team, is a groovy song with clear electronic influences, particularly the heavy use of the synthesizer during the instrumental hook. It is a self-reflective song by the band about how they feel whenever they meet their fans, especially at concerts,and the lyrics, interestingly, include mandarin.

Me in your eyes, you in mine

Your deep eyes, that I can’t see the bottom of 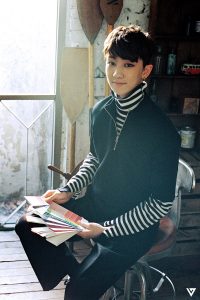 This inclusion is understandable given that two of the members, Jun and The8, are Chinese. Especially since ‘Highlight’ is a song about their feelings about their fans, it is rather befitting and almost poignant that this diversity of the team is reflected in the song. It is disappointing, however, that the mandarin phrases, which make an appearance during the instrumental hook, are warped such that they barely sound like words anymore — one would find it very difficult to recognize that they were lyrics, let alone that they were mandarin lyrics.

After three rather upbeat songs, the listener is then given a bit of a break with “Lean On Me”. Featuring members of the Hip-hop team, S. Coups, Wonwoo, Mingyu, and Vernon, this fourth track pleasantly surprises by having all four rappers sing. Vaguely reminiscent of R&B, “Lean On Me” is a sweet, mellow song, and the gentle, slightly raspy vocal qualities of the hip-hop unit perfectly complements the essence of this song.

Even if we don’t know when our last will be 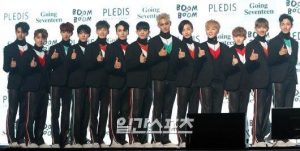 A gift from the unit to their fans, the song describes the mutual reliance of Seventeen and Carats, and underscores the promise that just as the fans have been there for them, Seventeen will be there for their fans, too. This is a lovely song, and the sentiment, lovelier — especially in an industry as volatile as K-pop, there is perhaps no relationship more important than that of between the idol and the fan.

“Fast Walk” follows “Lean On Me”, and is, perhaps, my favourite song of this mini-album. The second song of the album that includes all members of the band, it describes a dwindling relationship where the two people are no longer walking in sync. The syncopated rhythm of this song is one of the most important elements of this song. In particular, a strong emphasis on the second beat makes the rhythm stand out to the listener, and the presence of an improvising flute in its high register during the pre-chorus and chorus gives the song a very catchy, slightly jazzy quality, changing things up a little.

Next comes “Don’t Listen Secretly”, a melancholic ballad by the vocal unit, which is quickly followed by “Let’s See”, before the album wraps up with “Smiling Flower”. “Don’t Listen Secretly” is slightly meta, being a song about the song itself. In particular, it implores an ex-lover to not to listen to this song alone and secretly, but to return back into the arms of the singer. It is one of the numerous songs co-produced by member Woozi, and was conceptualized by Woozi himself during the Thanksgiving holidays. 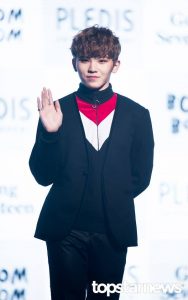 Finally, “Smiling Flower” brings the album to a close, and it is the perfect ending song. Again, a song by the boys about how they feel about their fans, the gratefulness and sincerity of Seventeen is beautifully woven into both the lyrics and the melody.

I always feel like I am receiving from you

That’s why I am so thankful and even more sorry

Overall, Going Seventeen seems to be an excellent reflection of the exponential growth trajectory that Seventeen has been undergoing, and also reflects the sheer amount of hard work that the band has been putting in. Much like BTS, it is wonderful to see so many of the members actively participating in the production of their own music, be it as composers or lyricists — a startling nine of thirteen members had contributed musically to this latest mini-album. Most notably, of course, is Woozi’s involvement in all but two of the songs.

If I were to be extremely picky, perhaps the only thing unsatisfactory about this mini-album would be the fact there were more unit songs than group songs — but really, that would be overly critical. It is rather heartening to see Seventeen doing so well, and their hard work paying off. Amidst rumours of poor treatment from their agency, as well as low budget production during their earlier days, Seventeen has proven itself to be a group worthy of the prizes that they have won. Surely, they are a group to keep your eye on, for they will certainly (hopefully) be going places in the near future.