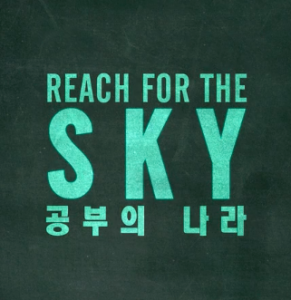 Every year, on the second Thursday of November the nation of South Korea holds its breath as high school seniors sit for the annual college entrance exam, or Suneung. As we explored last year at Seoulbeats, the Suneung is more than just a test, it is the test. One that has become so interwoven with history, culture, and the education system that it’s seen as the make or break moment for many young adolescents.

This year, approximately 606,000 students sat for the exam on November 17th. Planes were once again grounded, cheer groups gathered at the test center gates, and police escorted tardy students to the test centers. Idols like Dahyun (Twice), Umji, Shinbi (G-Friend), Dino (Seventeen), and a handful of others also sat for the exam, while their peers cheered them on through social media posts.

South Korean students seemingly spend their entire youth preparing for a single aptitude test that is only offered once a year. A high score on the Suneung is the ticket into one of Korea’s most prestigious universities, known as the SKY universities (Seoul National, Korea University, and Yonsei). Back when Korea’s collage attendance rate was much lower — and before the economic crisis of 1997 — admission to one of these universities secured a comfortable future.

Now, however, even graduates of SKY universities still struggle to find employment post-grad. South Korea boasts one of the highest youth unemployment rates in the OECD, with many well-educated young adults working part-time or not at all. The employment problem has become so severe that the Seoul government recently proposed an allowance for unemployed twenty-somethings.

Almost tragically, the Suneung is far from the last entrance exam students and graduates will face in their life. Following a successful college career comes the company entrance exams for prestigious conglomerates like Samsung and Hyundai — which are just as, if not more, challenging than the Suneung.

Despite this reality, the prestigious nature of the SKY colleges, and the importance of a high score on the Suneung, have still maintained as a collective cultural ideal. Many students and families still see admission into a SKY university as a golden ticket, a true mark of success.

This reality is no more apparent than in Choi Woo-young and Steven Dhoedt‘s 2015 documentary, Reach for the SKY. The Korean-Belgian documentary offers a scathing glimpse into the lives of those most impacted by the role of the Suneung: the celebrity-esque lecturers, the families and teachers, and most importantly the students who sit for the exam. The documentary profiles three students, all (eventually) taking the test under different circumstances: Hye-in a middle school student, Hyun-ha who is re-sitting the exam in order to get into Seoul National University of Education, and Min-joon who has sent himself away to Suneung boot camp for an entire year to prepare to re-take the test.

The film wastes no time in reminding us that the education craze is not a new phenomenon. Reach for the SKY opens off with vintage footage of students pouring into classrooms, all to the backdrop of an official address to the nation about the importance of not only education, but of endurance. Before we’ve ever been introduced to modern students, we are shown exactly how much of a cultural identifier the Suneung is and has become. Much like the mandatory military service for males, the Suneung is a point of cultural reference — a shared experience that both tortures and shapes the nation.

Reach for the SKY begins following the students and lecturers nearly a year before D-day comes in November. While Kim Ki-hoon, a test lecturer, stresses about his online English lecture class, Hyun-ha visits a fortune teller to re-affirm her destiny of being a teacher, Min-joon struggles with the toll his decision to retake has taken on his family, and Hye-in is faced with the fact that her test scores are simply too low to even consider a top-tier university.

Most people have heard about the grueling toll the Suneung and its preparation takes on the students who sit for the exam, but Reach for the SKY ventures further. It crosses into the lives of the families who not only encourage, but question their children. The narrative of familial goals and copious studying is challenged by the profiles of the three students’ parents. While they all, of course, want the best for their children, each family is forced to encounter the idea that perhaps a SKY university acceptance will not actually lead to a happier life. No parent wishes to see their child suffer, and yet the parents of the three students at times feel that is exactly what they are doing.

Through this lens, we see that, after a certain point, it isn’t the adults pushing the students, but the students themselves. As Hyun-ha explains, “most young people want to go to a good university. But when I speak to older people, they say it isn’t important. I hope that’s true.” Yet, before her exam results arrive, Hyun-ha comes to the very serious decision that she will re-take another year if her scores to not qualify her for Seoul National, even though her parents highly discourage it. Min-joon shares a similar sentiment when he tells his parents that getting into a top university is more important than a good education. He truly believes that happiness is not an option in life without a degree from a top university.

Reach for the SKY doesn’t limit itself to the students who are subjected to the pressure of success, it also offers a quiet critique of the role of media in the education craze: students are routinely captured staring at screens, watching internet lectures, and following the news reports about the significance of the exam. 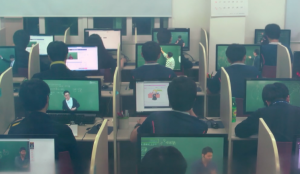 The relationship between media and the education craze is no new development, either. In order to ensure public education, the South Korean government legislated the creation of the Education Media Network (EBS) back in the 1970s. What began as simple lectures to supplement education soon evolved into its own broadcast empire, with multiple television channels, study books, online portals, and radio broadcasts. Given the reach of EBS (and the rising cost of private education) the Lee Myung-bak administration later demanded that 70% of the exam questions be based off of EBS lectures in an attempt to curb the reliance on private education. However, that demand meant that many public schools began basing their curriculum around EBS lectures.

Even more concerning, the success and power of EBS lead its lecturers and other entrepreneurs to realize the potential of using mass media to tap into the anxiety of students and their families in order to turn a profit.

In Reach for the SKY we see the impact these educational media empires have on the education system. The inclusion of lecturer Kim Ki-hoon demonstrates how the media attention combined with national anxiety has launched quasi-educational empires. Lecturers like Kim have crafted their own million dollar industries that center around their own celebrity and draw parents and children in much like a religious cult. It sounds like an over-exaggeration; yet in the film, we watch Hye-in attend one such mass lecture after she’s been told her scores simply aren’t good enough. Students cry, and parents cheer as the lecturer tells them that he can make them live up to their potential — if they’re willing to pay.

While no doubt critical, Reach for the SKY somehow manages to not play into the sensationalized drama of the Suneung. Yes, it’s scored by dramatic background music, and routinely features a countdown to D-day. But, all the drama and angst presented on the screen is presented by the students themselves — through their raw, and very genuine convictions that the exam will define the course of their life.

There’s not only a tension that builds as the countdown gets closer and closer to D-day, but a tension in the battle the students go through in that same time with themselves. They know that the Suneung is “just a test,” and yet, as Min-joon reminds us, “It’s not my choice, all my life society’s pushed me to go to a good university.” All the students profiled are completely aware of the fact that life goes on following the exam, and yet all they can’t help but shape their youth around it. They can’t help but succumb to the pressure that the culture, media, their teachers, and even their peers have placed on a single exam.

There is no narrator, there is no overt judgement. Instead, we are shown images of students crammed into studying cubicles watching online lectures, contrasted with Kim Ki-hoon and his luxurious BMW that he drives to his lecture site. We hear Hyun-ha say that “grades are more important than friends” before the exam, while after she’s found her own form happiness she says “[students’] dreams shouldn’t be about getting a high score.” We’re left to formulate our own opinions.

The sacrifices the students and their families make are no doubt enormous, and the Reach for the SKY doesn’t attempt to sugar coat any of them. It reminds us that the students didn’t get to this point of stress on their own, that there is an entire culture that is backing them — that has placed such importance on the test — and entire industries that profit from the anxiety of a nation. While the culture that backs the test is unifying — with families, churches, schools, friends, and private academies all striving for the success of the students —  these same students have given up a great deal of their own happiness in order to meet a cultural ideal.

It’s an interesting conundrum, and Reach for the SKY offers no solution, only a glimpse into the reality. While it ends on a hopeful note, one can’t help but feel conflicted about the outlook for the future. Reach for the SKY confirms many assumptions you may have already had about the South Korean education system, but it also humanizes the droves of students who sit for the exam each year. We’re all rooting for them, even if there are major disagreements to be had with the importance the culture places on the Suneung.

Reach for the SKY is scathing, raw, and definitely worth a watch.