BTOB is back with “I’ll Be Your Man” from their ninth mini-album, New Men. While the style of this title track is a major shift from their recent trilogy of calm and soothing ballads, the group has come full circle as they return to their roots with this intense, uptempo dance track, which not only showcases their famed vocals but also their diversity in styles of music.

The track opens with a soft piano melody coupled with Peniel’s deep voice, but this soothing start quickly intensifies as violin instrumentals are layered to introduce the first verse, sung by Changsub. The music video follows this escalation of emotion, with shots of military soldiers marching with rifles in a snowy military camp and of the wounded members gazing intensely into the camera behind barbed wire.

Shots of the group decked out in luxurious red velvet suits, a recent fall fashion trend, are alternated with shots progressing the storyline, which is about the members risking their lives in a military base to find their beloved as they pray for her return. Specifically, Minhyuk is the male lead of this music video, as the beginning shows a red-haired Minhyuk entering a church and kneeling beside the female lead (who is Elkie of their sister group CLC!) to pray. A love line is also established between the two as she shyly peeks out from her white, lace veil to smile at him.

The music video is mainly set in a church presumably within the military camp which elevates the danger and risk of them getting caught by other soldiers. The motif of religious prayer is also introduced through Peniel’s opening English rap:

Girl I don’t know where you are

But if you can hear my prayer

Give me one last shot

As we transition into the pre-chorus, shots of an anguished Sungjae in a dark, secluded room and of Ilhoon in the confession box, which further conveys the praying motif, symbolise their desperate situation and plea for hope. Musically, Ilhoon’s rapid-paced rap, which contrasts Peniel’s more laid-back and hip-hop style, as well as the high-pitched synth melody in the background, build up tension for the chorus.

Hyunsik opens the chorus with the titular “I’ll be your man”, with his hands clasped in a praying motion. Shot outside, we see the dual motif of the roaring flames coupled with the snowing landscape, perhaps symbolising the ongoing conflict as the members seek out their loved one. Although this is clearly a dance track, the quality of the vocals is definitely not lost as the vocal line — Eunkwang, Changsub, Sungjae, and Hyunsik show off their incredible harmonisation.

The lyrics of this song closely correspond to the events of the music video as they are literally a prayer:

Dear God do you hear my cry

I pray for her back every night

Promise you that I’m a better man

Won’t ever let her go no not again

The members’ constant praying in their rapping and singing is definitely befitting of their numerous shots in the confession box as they desperately plead for their girl to come back.

In terms of cinematography, it is interesting to note the use of binary opposition to present the ongoing conflict. Aside from the hot fire and cold snow elements, the alternating use of coloured versus black-and-white shots is also extremely effective in conveying the members’ struggles. Disjointed, shaky shots of Minhyuk sprinting in the military base to find the female lead adds to the rising tension, as does Sungjae’s teary expression.

The bridge of this song is a slight break from all the intense emotions, yet is no less aesthetically appealing as one of the shots show Peniel with a rapidly-shrinking moon in the distance, perhaps symbolising the loss of hope as he is gradually left in the darkness. Indeed, this ominous shot foreshadows Minhyuk’s capture as he is tied up shirtless, betrayed by the one-and-only female lead. The dramatic contrast in his despairing expression with Elkie’s cool and nonchalant one signals the start of the climax, which is the perfect of rapid rapping with passionate vocals in the background, capturing the pain of their betrayal and downfall. The rest of the song then shows the hopeless expressions of the individual members, closing with a dramatic black-and-white shot of all seven members somberly on the steps of the church.

While this music video was a delight to watch and listen to, the main criticism I have is the lack of progression in the storyline — only bits and pieces of the plot were shown, leaving viewers to have to guess what happened. The buildup of Minhyuk’s and Elkie’s relationship was also not shown, and it is unclear as to why Elkie betrayed him and sold him out for his death.

The production of this release is also very impressive – in fact, Hyunsik was the one who wrote “I’ll Be Your Man.” The line distribution has also greatly improved, with the rap line — Peniel, Ilhoon, and Minhyuk – getting lots of more individual parts. The construction of this release is also of high quality — it is very reassuring to know that Cube Entertainment is finally putting in the investment into BTOB that they so deserve. 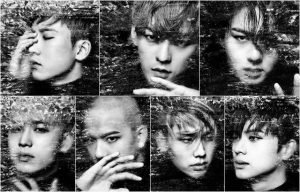 Overall, “I’ll Be Your Man” is a great release for BTOB, proving that they can do uptempo dance tracks all the while keeping the quality of their vocal- and rap-work up to par; as a Melody, I could not be more proud of their progress thus far and am very excited for their live performances of this title track!