W -- Two Worlds: The Only Happy Ending is the One We Make Ourselves 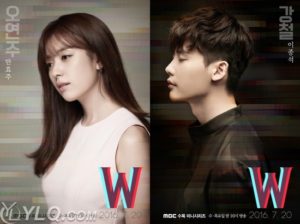 “With accumulated sales of more than 10 million copies, Korea’s best webtoon series W” has come to an end. This opening narration accompanied viewers for almost two months as the drama, starring Lee Jong-suk and Han Hyo-joo, aired its 16 episode story full of thrill, suspense, and interspersed romance. W has been a hot topic amongst drama enthusiasts for a while now – it started off on a strong note with fairly decent ratings, then proceeded to gain hype as the drama progressed due to its original storyline and fast-paced plot. The drama even surpassed its competitors to take first place in its timeslot, but did the final product live up to expectations? 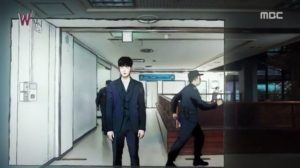 W’s greatest strength is in the basic premise of the story – it has an Inception-like concept in the sense that it has us, the audience, watching characters in a fictional world (the drama) watch characters in another fictional world (the webtoon). The conflict is then created by allowing the characters to cross between realities, adding complications to the otherwise straightforward hero vs. villain story that W, the webtoon, was originally based upon. The idea of the drama is undoubtedly original, which is what made the drama engaging for many viewers at the start, and allowed for an ideal balance between action and contemplative moments – action in the continuous taking and saving of Kang Chul’s (played by Lee Jong-suk) life, and contemplation in how Oh Yeon-joo (played by Han Hyo-joo) attempts to work around revealing her identity in Chul’s world.

Further conflicts introduced were also relatively realistic for the most part. Yeon-joo’s inability to explain her appearances in the webtoon world ultimately lead to her being forced to expose the existence of the webtoon, thus allowing multiple other characters to cross between worlds. The idea of purpose and the disappearance of characters when they lose it. The impossibility of Kang Chul and Oh Seung-moo/the killer (played by Kim Eui-sung) coexisting in the end. With each new development of the plot line, a new complication is introduced which puts the main characters in a stickier situation every time. 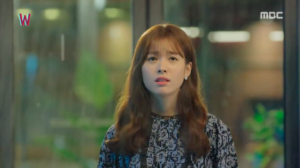 However, it’s in the resolution of these conflicts that the plot gets messy. I’m under the impression that the writer was so intent on burying the characters so deep in problems — so that the viewers would feel a sense of hopelessness for dramatic value — that he didn’t consider how they would have to eventually work their way out. As a result, in the second half of the drama, a lot more plot holes and unrealistic elements appeared, taking away from the originally ingenious ideas.

Several questions were left unanswered. For example, how does the summoning work? It was initially said to occur when Kang Chul in the webtoon calls Yeon-joo to mind, but how could he have continued to summon her after he had forgotten about her? When does the freezing of time occur, and what dictates which characters can move when time is frozen? Why did the story continue the first time “the end” appeared in the webtoon, and why couldn’t the same happen in the last episode?

The concept of variables is also a clever motif, but later on in the drama, it appeared to be an excuse to throw in elements that would facilitate the resolution of the plot that had not been previously introduced. As if crossing between realities wasn’t complicated enough, by the end of the drama several characters were able teleport from one world to another based on their own power of will, and transport others to another world as well. Kang Chul’s character also becomes this unrealistic all-powerful figure who is not only an accurate sharpshooter, but also has the stamina to completely recover from a bullet wound on his own, and the intelligence to figure out that the killer had a duplicate tablet somewhere. 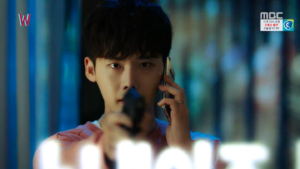 That being said, while the storyline loses a lot of its realistic elements partway through the drama, the plot maintains a relatively good pace throughout. W has a talent for keeping you on your feet: while it’s not stingy with its romance scenes, it makes sure to compensate for any lull in the speed of the narrative with a shock for the viewers, most notably with the killer’s anonymous phone calls and Oh Seung-moo’s disappearing face at the end of their respective episodes. The cinematography and editing are also great – there are certain scenes in which the lighting and the music changes create a subconscious sense of foreboding before the viewer realizes that anything could even go wrong.

Yet while W excels in its action aspects, its romance aspects are relatively underwhelming. I did enjoy the humorous teasing between the two, Yeon-joo’s earlier (rather desperate) attempts to cause a change in emotion in Chul, and the kiss scenes. However, the drama often tries to create heart fluttering moments through the simplistic gestures of romance; for some, watching a couple date like they’re reading from a book – literally – is not the most interesting thing to watch. In addition, there just appears to be something questionable about the fact that Yeon-joo is essentially in love with her childhood fantasies, but that is only a minor detail. 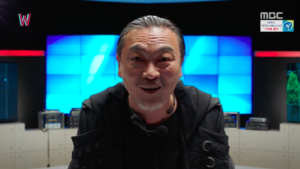 On that note, however, Han Hyo-joo’s character was not exactly well-written either. Yeon-joo had considerable potential to be a strong female heroine – her medical knowledge allowed her to play a strong supporting role to Kang Chul in the beginning, and the fact that she was one of the few people who could draw the webtoon also gave her considerable power. It was thus disappointing when her contributions to the plot were gradually reduced and replaced with a lot of plainly pining for Chul. Han Hyo-joo has also been criticized by some for her acting in this drama, and while to me it was decent, and certainly didn’t distract me from enjoying the series, one problem that did arise was that I was unable to sympathize with her character. While objectively speaking, her character did go through undeniable hardships – “no one there knows I existed, no one here knows what I’ve been through” – the abundance of crying scenes didn’t do much to convey the raw emotion in those words.

In terms of good acting, Kim Eui-sung certainly took the cake in W. He had the challenge of playing a double role, and pulled both off exceptionally well. The first time he changed his attire and hairstyle to make his appearance as the killer, I had questioned for a split second whether it was the same actor. His skills further showed in the last few episodes of the drama when he had to transition from an confused old man and vengeful murderer within seconds, and he impressed with how convincing he was in doing so. 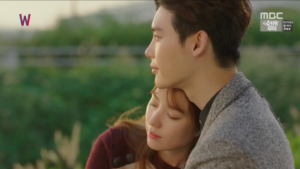 All in all, W is a drama with a strong start and bittersweet ending. The ending to the drama mirrors the ending to the webtoon, in the sense that it’s sad but realistic – the paradox of Kang Chul and Oh Seung-moo’s existence made it impossible for both to survive. Oh Seung-moo’s final sacrifice, however, was one of the most tear-jerking moments of the entire series – it really encapsulates the spirit of the love Seung-moo showed towards his daughter throughout the story, and demonstrates the depth of fatherly love. The irony of the fact that the creator Oh Seung-moo was forever trapped in the world he had created, while the controlled Kang Chul ultimately managed to escape also shows the unpredictable nature of life; it suggests that we are in control of our own fates, and the only happy ending that exists is the one that we make ourselves.