It’s been a busy a year of collaborations for both Dean and Heize. While Heize gained attention teaming up with both Chanyeol and Chen of Exo, Dean featured in Taeyeon‘s “Starlight” as well as Dok2‘s “Bad Vibes Lonely.” Back in June, the two rising artists came together for the jam, “Shut Up and Groove.” Keeping the momentum of their collaborative success going, Heize and Dean have teamed up once again — with the aid of DJ Fritz — to present the lead single of Heize’s debut album, “And July.”

If it were anyone aside from Dean, I would be wary of the fact that both of Heize’s post-Unpretty Rapstar singles feature the same artist. However, Heize and Dean have a special kind of musical chemistry that’s advantageous for both of them. This is mainly because of the way they balance with one another and can play off of each other effortlessly. There’s a natural —  almost playful — synergy between them, and that is no more clear than in “And July.” Together, they manage to convey a complex relationship that toes the line between affection and loathing.

We’ve come to expect good things from Digipedi productions, and “And July” does not disappoint on that front. What’s fascinating about the MV is that the lyrics say one thing, while the visuals seemingly convey something entirely different. Or do they? There’s a rich layer of complexity between the emotions of the track and the actions of Heize and Dean on screen that creates more questions than answers: are they trying to confess their affections or their ambivalence? Are they lovers or enemies? Do those two things have to be mutually exclusive?

“And July” plays much like a throw-back hip hop confessional of an adult playground rivalry; Dean pulls Heize’s metaphoric pig tails, and she figuratively kicks him in the shin in retaliation. She doesn’t want him to see her react, not when he pours sugar into her coffee or when he passes her chewed up gum instead of the ring she anticipated. Heize continues to play into their childish game because it’s easier than acknowledging that perhaps she actually cares about him — that he’s somehow wormed his way into her heart.

Did someone put drugs in it?
In your normal voice
I drink cold water
I drink bitter coffee
But it’s so sweet, why?
(I said it’s) killin me softly

Dean, too, struggles with communicating his affections and frustrations. Where she acts ambivalent, he acts out to keep her attention. He knows it’s not healthy, what they’re doing, but he also fears that talking about the elephant in the room might ruin everything.

But today, it’ll be different
All the emotions I pushed back
I’ll tell you today
I hope We’ll be ok 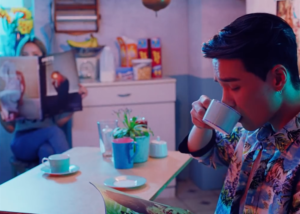 Where Heize wonders how to confess her feelings without coming off too eager, Dean wants to promise her the world so long as she acknowledges that they might be more than friends. Somehow, they both reach the conclusion that July is the perfect month for the conversation to take place — if they can survive until then.

I was denying it, saying I don’t know
Then two seasons have passed us
Even in this moment, I miss you

If the MV is any indication, their relationship is a ticking time bomb. All the insecurities of the lyrics translate into a live-action version of Spy vs Spy, complete with lots of food, toothbrushes in places they shouldn’t be, dead-pan stares, and button-pushing. How things escalated this far is unclear, but what is clear is that something must be done before they end up any more bruised than they already are (literally).

Despite the palpable tension of the MV, there’s something equally adorable about it. A lot of the cuteness can be attributed to Dean’s immature — yet adorable — persistence contrasted with Heize’s stoic eye rolls. They play off each other so naturally, taking turns lamenting their own misfortune and gleefully torturing the other in retaliation. It’s all push and no pull, but there’s a small semblance of fondness communicated in their gestures when the other isn’t looking. 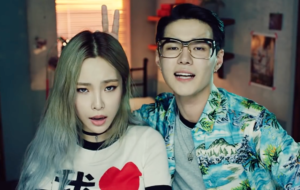 It’s not just their on-screen chemistry that makes “And July” so enjoyable, either. Heize and Dean have voices that compliment each other both vocally and stylistically. Heize has a really unique vocal color — much like Suran — and I appreciate how easily she flows between rap verses and singing bits. Dean’s vocals are equally dynamic, and when their voices come together it becomes a harmonious exchange of banter that is never dull.

(That being said, there are moments when Heize’s lack of enunciation in “And July” is reminiscent of someone given a bit too much Novocaine at the dentist. The track could benefit from clearer delivery on her part.)

Overall, “And July” is a frank and amusing release. Beneath the juvenile antics of the MV, there’s an interesting exploration of the boundary between love and hate that goes hand-in-hand with the complexities of modern relationships. Why do we have so much trouble expressing our feelings, and why is it easier to act indifferent than show signs of vulnerability? The MV doesn’t try to answer the questions it raises, and for me, that makes it all the more successful.

Heize and Dean’s “And July,” with all its contradictions, is much stronger than their first collaboration — which I still thoroughly enjoyed. While it would be nice to see Heize release a completely solo track, I wouldn’t object to seeing more from the two artists together.