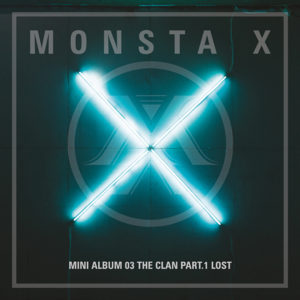 After a bit of a wait following last year’s Rush EP, the boys of Monsta X return with another mini-album, the ominously titled The Clan, Pt. 1 LOST.

For all intents and purposes, Monsta X is new to me. Sure, I’d heard of them, even seen one of their videos (the special rooftop performance of “HERO”). Admittedly I know very little about Monsta X, but I always sort of pegged them as another one of the brood of “hip-pop” groups out there, one of dozens that wear hip-hop like a concept to pretend to stray from the “typical” idol groups (whatever that may mean nowadays, with so many purporting to be harder edged). However, I wanted to give them a chance to see what, if anything, I could take away from this group of pretty boys.

With that in mind, the opening track threw me for a bit of loop. “Ex Girl” is a sweet song, even if the subject matter is anything but delightful—two sides of the same coin lamenting the loss of the other.

I’m your ex-boy, can’t we turn things back?
Back to when we were happy?
I know, my ex-girl, after I turned around and left
Why am I struggling with our memories?

Also surprising are the vocals here. Seeing Whee-in from Mamamoo lending her talents to “Ex Girl” says to me somebody in Monsta X is sure of their vocal prowess. To go toe-to-toe at least in narrative with a member of a group with huge vocals to spare, he’d better. In that department, at least, I don’t think I could’ve been disappointed. The range and scope weren’t exactly taxing on any vocalist who’d give this light track a shot.

And just as quickly as I’m taken aback with the softer pop, I get what I kind of expected with whatever limited knowledge of the group I had. “All In” makes use of the typical dubstep/EDM mashup that’s become commonplace in K-pop in the last few years. That being said, I can appreciate the melodic cadence of the vocal and how it interacts with the music and how enthusiastic our protagonist is to give all or nothing for the subject of his affection (music video notwithstanding).

The album musically continues in that vein with the subsequent track. “White Sugar” seems more or less like an extension of the song preceding it, giving us a heavier slice of EDM, with a slight tempo modulation. Even lyrically, the song is set on expressing our protagonist’s undying adoration of his love interest:

Lovely girl
Please look at me
Don’t fly past me like the soft spring wind
I wanna stay with you and love you
You’re a flower
I’m softly melting at your scent
Oh my god what do I do?
I just like you
My hardened heart is blossoming
If only your footsteps will come to me now
That’s how our spring will start

However, the composition is almost identical, doing almost nothing to differentiate it. Perhaps that’s the point of the album in the end: paint a narrative with similar musical themes. However, that leaves LOST sort of swimming in its own overexaggerated beats, as if trying to really drive home the message “We go hard, even when we’re talking about matters of the heart.” Inevitably one just skips ahead, if for no other reason than to find something else to listen to. At first I didn’t even realize I was listening to a different song until I went back to find out why “All In” was so long without introducing so much as a signature change.

With track “Focus on Me” we’re given more of the fluffiness we were introduced to at the mini’s opening. It doesn’t help that this song is almost identical to “Ex Girl,” save for some nuances and a fuller sound. However, at this point in the story, our protagonist’s fixation on the female lead is actually bordering on obsession. If declarations of undying love and how perfect her skin is were warning rounds in the air, “Focus on Me” is definitely shots fired:

I completely fell for you
I can’t help but to get greedy
The more I look at you, the greedier I get
I’m curious about everything about you
I’m not like this to other girls
My eyes are only fixed on you
I close my eyes but I see you
I’m not gonna hesitate anymore
I really made up my mind

He even goes on to tell her pointe-blank, “From today, I’m only obsessed with you. But I’m not dangerous, so baby don’t worry.” Sure, buddy. You tell me you’re obsessed with me, then follow it up with how un-dangerous you are? That’s reassuring. And oh-so romantic. Look, fellas. Word of advice, stop trying so hard. Instead of spending your time stalking and lamenting your need for this woman, why not just ask her out for a cup of coffee? Instead of getting pissy when she smiles at other guys as you sit there and watch, why not approach her? Stop hiding behind that bush with your binoculars, Cyrano, and go for it. (But if your love interest is your cousin, you may have bigger problems than an unfortunate penchant for obsession.)

From desiring the attention of a love interest to bemoaning her lack of attention, “This Cheating” dares to be slightly different by giving us a bit of a faster pace during the first verse and chorus, then a breakdown for the rapper to shine after the first iteration of the chorus—which obviously goes back to the same dubstep that makes up half the album to this point. It does serve as the album’s most musically interesting song, using a mashup of different musical tropes. However, it does little to break up the monotony. Neither does it do much to temper the frightening obsessiveness of our leading man.

“Because of U” adds some more lightness to the heavy-handed attempts at “swagger.” Not groundbreaking, but the smoothness of the track does at least manage to do something none of the other songs on the album did: differentiate itself from what came before. There’s a nice little swing here, the falsetto vocals fitting well with the music, even the rap finding a place to sit comfortably in the sweetness of the track. Even a little flub-up on the last go-round of the chorus (the lead vocalist seeming to forget the whole rest preceding the chorus) adds charm to the track. The song ending as abruptly as it does is definitely no accident. As the closing of this part 1, it does force the listener to sort of lean into what comes next, as if anticipating something that hasn’t happened yet. So at the very least the last note of the album is effective. How effective it is as the cap to what preceded it is questionable. 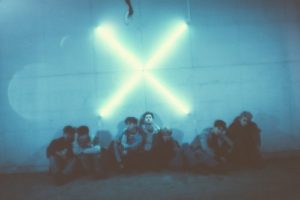 And unfortunately given the tone of the songs preceding it, the sweetness of the lyrics sort of gets tainted, drowned in the slobbering jowls of a young man’s obsession with a young lady. Which is a shame, because it really is a sweet song.

My understanding of Monsta X was that it falls under the umbrella of “dance” groups that seem to crop up by the fistfuls every few months. They’ve got their charismatic “rapper” lead, their obligatory sweet-voiced crooner, and the requisite beat-driven music that makes plenty of room for the boys to tackle choreography. They’re a group meant for the stage more than the studio, insofar as they’re intent was to find their slot in the dance group niche and try to outdo the other groups they have to share the spotlight with. While there were moments that strayed from this norm, those moments were filled with standard pop fare—nothing really exciting or even interesting.

So Monsta X sort of lands in the middle—same kind of fluffiness interspersed between the same kind of hardcut beats. In my very humble opinion, the album is a less convincing offshoot of the Most Beautiful Moment in Life series of their dance group peers. LOST really is sort of a muddled affair with music that’s not bad, per se, but it certainly doesn’t leave an impression.

Fans of the group will probably find much to take away from this first in what appears to be a two-part series. And while the vocals when they do shine are commendable and the compositions are comparable to everything else out there in terms of decent quality, that’s just about it. Everything here is just on par, not really excelling in any particular area, just sort of stagnating in a niche that’s overpopulated with exactly the same thing.