Descendants of the Sun Ep 11-12: An Explosion of Melodrama Clichés 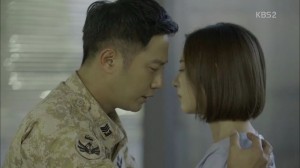 Anyone who’s seen last week’s episodes of Descendants of the Sun would know that only one of two things can happen in the succeeding episodes: either it’s going to showcase a more gripping and emotionally charged storyline that will definitely live up to its fame and hype, or it will fall flat by simply succumbing to a more traditionally clichéd K-drama style of storytelling. Unfortunately, it seems that the latter has become the more apparent direction in this drama, and despite its impressive production value, Song Joong-ki’s charm, and the drama’s chart-topping OSTs, Descendants of the Sun is turning out to be just another K-drama — heck, maybe even worse for totally wasting its potential of becoming a genuinely good drama.

After coming into contact with the blood of the infected Manager Jin (Jo Jae-yoon), Lieutenant Myeong-Joo (Kim Ji-won) is put into quarantine for testing positive for the M3 influenza virus. As expected from Sergeant Major Seo Dae-young (Jin Goo), he recklessly makes contact with her via a hug after he realizes that his girlfriend has been infected. Luckily for him and everyone else in the camp, none of them contract the disease. 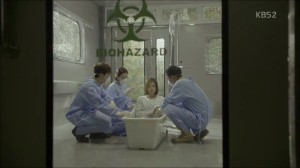 Let’s be real. This influenza outbreak scenario is just way too out of left field, and it severely lacks a proper set-up and an effective follow-through to make up for its random insertion in the drama’s plot. While this outbreak might have been made out to reflect last year’s Ebola tragedy and this year’s Zika spreading, it sadly fails to reach that level of relevance and hardly serves up any substantial commentary with regards to sickness and health in war-stricken areas. Instead, the pandemic scenario ends up becoming a mere accessory of sorts to this drama by supplementing more of the series’ lovey-dovey scenes.

In general, this week’s episodes were composed of disjointed plots and over-the-top melodrama clichés that are used sparingly at the beginning of this drama, yet have sadly started to take root in every possible sequence of the series. From the classic, terminally ill character trope (who as expected is able to get better within this week’s episodes) to the annoying damsel in distress sequence featuring who else but Doctor Kang Mo-yeon (Song Hye-kyo) and the drama’s golden boy Captain Yoo Shi-jin (Song Joong-ki), episodes 11 and 12 were quite difficult to watch, especially when certain cringe-worthy moments that popped up only occasionally before became more apparent and frequent this week. 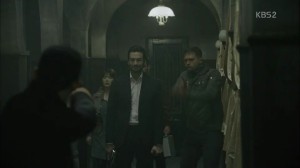 Plot aside, one of the greatest downfalls of this week’s episode is the poor execution of Shi-jin’s rogue rescue operation during episode 12. After Fatima and Mo-yeon are taken by Argus and his gang, Shi-jin sets off along with some of his Team Alpha squadmates to perform the covert rescue operation despite the adamant opposition of the Taebaek Corps’ commanding officer and the Republic of Korea government. Despite the drama’s consistently impressive production value, something of which it has definitely boasted numerous times, the action sequences are painfully awkward, almost vaguely reminiscent of a B-rated action film that couldn’t even be bothered with a decent rescue plot to make up for the bad acting and the messy action shots.

As the series leads continue to enjoy their screen time, the side characters are once again granted occasional appearances that add little to their overall character growth and development. While Doctor Lee Chi-hoon’s (Onew) transition might have been interesting, it isn’t enough to make for a convincing and effective character growth. Instead, we are served up with some rather gratuitous (and honestly, quite bad) actor Onew moments that sometimes didn’t really make sense, which is quite unfortunate considering how the shift from carefree, idealistic Chi-hoon to distraught Chi-hoon is one of the more intriguing character developments in the drama. Sadly, this shift falls a bit short and ends up way too shallow to even count as genuinely interesting character growth. 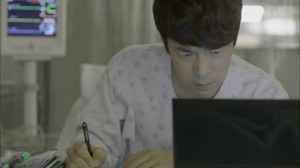 Amusingly, it seems that when it comes to side characters, Doctor Song Sang-hyun (Lee Seung-joon) is increasingly becoming one of the more, if not the most, interesting characters in the series. Despite his usual role of being the drama’s occasional comic relief, Sang-hyun proves in this week’s episodes that he is a brilliant and dedicated doctor as well as a genuinely warm and caring person. He showcases that behind his gags and jokes, he’s still someone who takes his profession seriously. In addition, while he may take pleasure from teasing Ha Ja-Ae (Seo Jung-yeon), he knows when to drop the joker act and sincerely expresses himself to the person he cares about.

After Shi-jin successfully rescues Mo-yeon, things once again go back to normal: couples (as usual) flirt with one another, comedy and laughs resume, and an overall fairytale-like ending presents itself to everyone save for the antagonists. The only difference this time is that the Haesung medical crew members finally left Urk and have since returned to South Korea. Meanwhile, it seems that the conflicts in Urk have been more or less resolved in a way, and if there are some remnants of unrest, the story fails to highlight them by awkwardly ending this week’s episodes with the Haesung medical crew’s joyful reunion in South Korea.

At this point, it’s hard to understand what direction this drama will be taking in the future episodes. Despite news of the series extending its airtime by releasing special episodes of the drama after it has ended (which doesn’t make sense since each episode is literally an hour long, and the writers could have done so much with the plot and the characters by the final episode), it’s rather vague whether or not Descendants of the Sun could redeem itself by then. For now, it’s pretty much just another rom-com drama set at a fancy location that just happens to star Song Joong-ki.