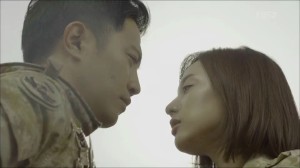 Regrets, redemption, and reconciliation. This week’s Descendants of the Sun episodes mostly centered on the personal (and romantic) lives of the series’ characters as they attempted to return to their usual routines after their dramatic post-earthquake rescue operations. As expected, this included some more of the adorable romantic goings-on of the drama’s two main love teams–series leads Captain Yoo Shi-jin (Song Joong-ki) and Doctor Kang Mo-yeon (Song Hye-kyo); and the side leads Sergeant Major Seo Dae-young (Jin Goo) and Lieutenant Yoon Myeong-joo (Kim Ji-won).

After an embarrassing, accidental confession via her fear-induced smartphone voice recording, Mo-yeon is faced with having to come to terms with her emotions for Shi-jin, which in the end went quite splendidly well. A few of their usually flirtatious banters as well as one rather misleading episode that involves some pretty dangerous landmines later, the two finally shared another kiss whilst on the back of a truck. 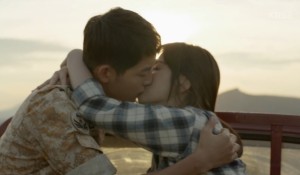 Meanwhile, the show’s other love team struggles with their own emotions for one another: Dae-young remains cautious and distant towards Myeong-joo while the latter is persistently straightforward with the former. While the rather immature and coy interactions between the two might spark a slight hint of annoyance to some viewers, there’s no denying that the gentle yet turbulent chemistry between Dae-young and Myeong-joo is the perfect off-set to Shi-jin and Mo-yeon’s very K-drama-style love affair. Fortunately–or so it may seem–fans of this couple can rejoice in the fact that Myeong-joo’s father has finally agreed to let his daughter date Dae-young on the condition that he resigns from the military.

Love affairs aside, the series has once again fallen into its familiar episodic format of over-exposing the romance plots and only using the more gripping, dramatic conflicts as supplementary elements to the overall narrative. For this week’s episode, the black market plot makes a comeback as Argus (David McInnis) and his gang are once again featured in both episodes nine and ten. This time, they go beyond conducting their sleazy deals in the shadows. After consistently threatening the life of Manager Jin (Jo Jae-yoon), their involvement in Urk’s post-conflict illegal activities are expanded all the more as an elaborate political scheme has finally been revealed. 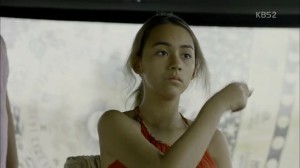 In addition, Argus and Shi-jin meet face to face once again during Shi-jin and Mo-yeon’s impromptu visit to a measles-stricken village composed of war orphans who are actually victims of the local gangs’ human trafficking ploys. While there’s definitely much to be said about Argus and Shi-jin’s heated reunion, the inclusion of the war orphans plot in the drama was definitely an interesting and commendable one as it further adds on to the reality of war-torn areas. Probably the most heartbreaking scene this week was when one of the orphans–a 15 year-old girl–said that she was more willing to die of measles than to be sold to a pimp.

Up until now, the series has merely skirted around the genuine gravity of war-stricken areas, heck even romanticizing it to a point. However, for the drama to dabble, albeit momentarily, into topics of human trafficking in this week’s episodes definitely served to remind audiences that despite all the sugary romance and exaggerated comedy of the series, war and the effects and causes of which should never be romanticized and used as superficial narrative devices.

Despite these gradual transitions in the narrative, the series still manages to serve the viewers with satisfying, fairytale-like events. Apart from the lead couples’ respective romantic closures, the series’ main antagonist Argus was also granted another shot (pun not intended) after Mo-yeon saves his life during his rather fatal encounter with the Song-Song couple and the 15 year-old orphan Fatima, who is to be sold by Argus to a pimp. Although a deeper conversation on morals might be needed to discuss on whether or not sparing Argus’ life was the right thing to do, it definitely contributed to this week’s general message of second chances. In addition, Mo-yeon and the medical crew treat the orphans while Mo-yeon grants Fatima the opportunity to go to school. 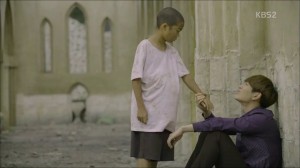 Meanwhile, despite how the Haesung medical crew has gone back to their usual roles of being the occasional comic reliefs of the series, one doctor seems to be struggling to return to his jolly old self. Onew’s character, Doctor Lee Chi-hoon, is somehow finding it difficult to forgive himself after he cowardly runs from saving a survivor (the one whom Shi-jin eventually rescues) in the power plant. While everyone seems to be getting their own personal second chances in life, Chi-hoon continues to dwell in his past mistakes and these shortcomings visibly haunt him in these episodes.

While it may seem that Chi-hoon’s dilemma is an over-exaggeration of sorts, it helps provide a varying perspective on regrets and redemption; that second chances are something that people struggle to achieve, but at the end, whether or not someone can have it depends on different factors such as one’s own personal circumstances or one’s ability to move on. Manager Jin is somewhat an example of the former since his circumstances have prevented him from hopping on that plane and finally leaving Urk to save himself.

Now that the series has introduced more of the intriguing black market conflict in Urk (and a melodramatic side plot that involves an influenza-infected side lead), there’s finally enough material in this drama to keep people–both fans and casual audiences alike–sufficiently invested in the drama’s story. One might even say that Descendants of the Sun is finally being granted a second chances of sorts, hopefully one that the series would use to a full advantage.