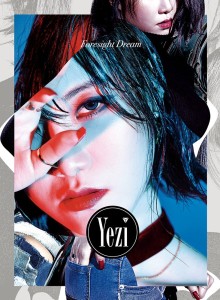 Last year, Unpretty Rapstar premiered as a spin-off of the Show Me the Money series as a platform for female rappers to showcase their skills. While both seasons drew a good deal of debate and criticism, there has been a general consensus that the show put less well-known female rappers in the public eye and opened up career opportunities for them.

Several girl group rappers took the stage in an effort to challenge the stereotype that female idol rappers are unable to rap. Among them, Fiestar‘s Yezi highlighted how female idols are pigeonholed as innocent, cute, or sexy, and expressed the desire to show a different style. She surprised viewers, judges, and other participants with her brazen and acerbic performance of “Crazy Dog,” lashing out at other rappers (especially male ones) who mock her:

Yezi’s solo debut, “Cider,” follows in the same vein, addressing those who deride her. The lyrics express discontent at those who attempt to control her image and behaviour:

To be honest, what does it mean to be cool?
To me, it seems that being cool is more like being mean
It’s natural to be upset when hearing rough words
But why does not being cool make me a bad person?

She directs these lines at two directors behind the camera, each bearing an annoyed expression, and proceeds to calmly tear a script into pieces. She rejects the coat her stylist chooses for her, and brushes off her makeup artist’s attempt to touch up her blush. These gestures are literal and symbolic acts of resistance against any effort to shape her, and she declares irreverently:

Why should I care about others?
I’m the one bearing the consequences and costs
So I’ll do what I want

The Korean title, “사이다” (saida), is a play on the word “사이” (sai), meaning “the gap [between].” Yezi expresses disdain at the song’s addressee, who is “always try[ing] ta be cool,” and asserts:

Is it clear now?
This is the gap between you and me 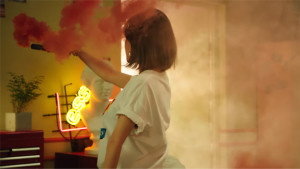 The title can also refer to cider or Sprite. Both drinks have a sour kick to them, while Sprite is more palatable due to its sweetness. Likewise, “Cider” tones down the fierce factor seen in “Crazy Dog.” Yezi’s rapping is more subdued, skipping profanities (possibly due to censorship concerns), and relying more on an understated delivery, riding the beat steadily to convey confidence.

Yezi’s effort to direct her own image is presented through the changes that she makes to the MV set. Unlike Ailee‘s revenge in “Mind Your Own Business,” Yezi’s destructive behaviour is not purely for the sake of destruction. Although some actions did come off as somewhat unnecessary, such as the kick at the wall, she destroys primarily to create.

Instead of placing Yezi in a more edgy-looking set right from the start, the MV opens with Yezi sitting on a sofa in a set typical of cute girl group MVs, complete with pastel yellow walls and a giant teddy bear. Cast in dreamy lighting and soft focus, she watches the backup dancers in the foreground, looking bored and mildly irritated. Their clothes are white—a colour commonly used to convey innocence—but also cropped and figure-hugging, alluding to sexy girl group concepts. Flashes of Yezi from the opening sequence, dressed in black and cast in hard lighting, provide visual contrast to this scene. 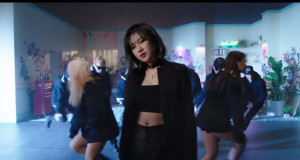 As the MV progresses, Yezi begins to wreck this cosy set. She tosses buckets of brightly-coloured confetti and splashes neon paint around, turning the charming but contained clutter into unapologetic chaos. In sync with the clicks in the music, the editing contributes to a sense of anarchy, with rapid cuts and flashing lights between different shots from all angles. Having transformed the set to her liking, Yezi re-enters with a larger crew of dancers, now all dressed in black.

Of interest is the fact that the area beyond the set is visible in several long shots. The MV does not suggest that this transformed set is natural; like the original, it is a construct. “Cider” is not a song that encourages a search for authentic identity, but a call to take control of one’s image.

Yezi’s transformation of the set, paired with a measured vocal delivery, creates an understated effect that is a refreshing change from spitting, profanity-laced disses. The lyrics, however, lean more towards straightforward statements. They could have benefited from some experimentation with more forms of expression — something similar to BTS’s “Baepsae,” for instance, which uses the metaphor of two birds in conflict to deliver biting social commentary. Still, the song and MV are a promising start — they free Yezi from overused female idol group concepts, but at the same time avoid being too excessive with the bad girl image and play up her confidence instead.