MBC’s Infinite Challenge has been all the 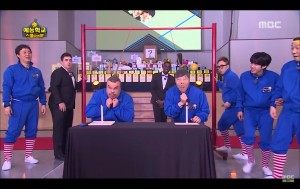 rage for the past few weeks, and unless you have been hiding under a rock you have likely seen video clips and articles from comedian Jack Black‘s recent visit to the storied variety show. In the course of one afternoon, the Infinite Challenge cast and Jack ­hyung (as they affectionately referred to him throughout the taping) took on comedy challenges of increasing difficulty, a sort of K-variety crash course they called “School of Variety.”

For the uninitiated, Infinite Challenge — or Muhan Dojeon in Korean, often shortened to MuDo — is one of the earliest and easily the most famous of South Korean variety shows. On air since 2005, the show chronicles comedians Yoo Jae-suk, Park Myung-su, Jung Jun-ha, Ha Ha, Jung Hyung-don (on hiatus) and idol Kwanghee’s hilarious efforts as they tackle an infinite variety of challenges. The cast members are among the most well-known entertainers in South Korea, and countless actors, idols, comedians and athletes have appeared as guests over the years. Infinite Challenge is consistently the most watched program in its time slot and weekly among the most watched non-drama/sports content in South Korea.

MoDu has featured foreign stars previously, though possibly no one as well matched to the show’s brand of physical comedy as Black. In Seoul for a quick trip as part of his Kung Fu Panda 3 promotions, Black had just four hours to film with the cast before flying out again. The show made the most of the short time, and Black’s talents, by taking him through a K-variety certification: an elementary through grad school level collection of classic challenges were assembled for Black to pick through, and at each level he had to beat cast members to advance. Along for the ride as translators were K-variety mainstays Sam Hammington and Sam Okyere, who tried a few of the challenges themselves.

Though star-struck at the beginning, the cast quickly embraced Black and reverted to their true personalities: calling him hyung, taking selfies, asking him to buy them food and inviting themselves to his house in Los Angeles (all good-naturedly). Other notable moments: Jack hyung vs. Myung-soo hyung chicken fight, the hilarious balance beam pillow fight and Black slaying at “guess the K-pop song.”

This episode somewhat caps a successful turnaround in the show’s recent history, as just a year ago the show was forced to apologize to viewers after a scandal-ridden 2014 saw the departures of two longtime cast members: Leessang’s Gil in April and comedian Noh Hong-chul in November, both due to drunk-driving arrests. MuDo started 2015 off on a high note though, with the huge success of their Saturday is for Singers (ToToGa) special which reunited 90s K-pop acts including S.E.S, Turbo, and Jinusean. The success of the music festival pushed many of the featured artists back atop the music charts and Jinusean and Turbo both went on to make comebacks later in the year.

After ToToGa, MuDo launched a search for a 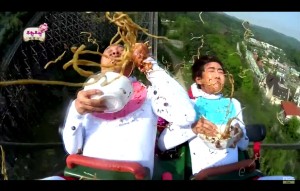 replacement cast member, the Sixth Man Project” featuring Super Junior’s Siwon, comedian Jang Dong-min, and retired basketball player Seo Jang-hoon among others. Z:EA’s Kwanghee was ultimately chosen to join the cast and the show used his onboarding period as an opportunity to reintroduce the show’s legacy to viewers, taking him through famous challenges from the show’s history such as eating noodles on a roller coaster, competing against machines and an airplane pull.

The second half of 2015 included the biennial Infinite Challenge Music Festival, this year featuring K-pop stars G-Dragon, Taeyang, IU, Park Jin-young, Zion.T and the band Hyukoh. In addition to all of the collaboration songs ranking on music charts after their release, the festival itself drew a record 40,000 attendees. To close out the year, the show launched the Infinite Challenge Expo in celebration of its 10th anniversary, giving viewers a chance to try out some of the challenges, and see sets and behind the scenes footage from the show’s 10 years. The Expo also drew K-pop acts BTS, Lovelyz, and Seventeen among other for performances, and the show has indicated that the Expo maybe a recurring event.

Though the cast is back down to five members currently while Jung Hyung-don gets treatment for an anxiety disorder, 2015 saw the show go from strength to strength, continuing through to Jack Black’s guest turn. Which brings us back to all of the recent coverage, especially internationally – from mentions in Rolling Stone and on The Ellen DeGeneres Show (where Ellen joked that she would start copying the challenges) – Infinite Challenge appears to be having a well deserved moment in the sun.

Readers, how did you like the Jack Black episode of MuDo?