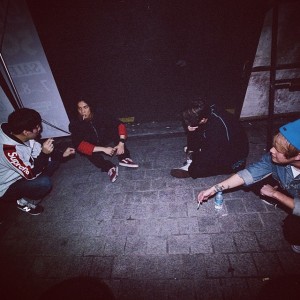 Welcome back, Indie Gem fans! This is my first time writing for the segment, and I want to talk about AKUA (아쿠아). I first heard of AKUA through a recommendation from a friend, who caught a few of their shows in Korea. They are a four piece band whose genre (as labeled on Facebook) could best be summed up as indie, dream pop, lo-fi, and shoegaze.

Hwang Jae-yeon is the vocalist and plays guitar, Cho Seong-min is also on guitar, Go Gang-won is on bass, and Han Chan-yeong is the drummer. So far, they have released one EP titled Fresh Always On in July 2015, and since then, they’ve been busy promoting through live shows at various venues.

What is remarkable about AKUA is that their instruments are really the key storytellers. Hwang Jae-yeon’s vocals are often layered by harmony and can come off as a melodic anchor for the choruses, coaxing songs towards a more anthem-laden route. The rhythms are reverberating and on a few songs are paired with bells/tambourines to play up a dreamy quality. The bass plays a key role in the foundation of their music, and the guitars echo into the abyssal space of their songs, adding that shoegaze aspect in their songs.

If you want to get a better sense of AKUA’s music, their first EP is free for streaming on Soundcloud. “Fresh Always On” the titular song off the EP would be a good indicator of the band’s sound. They have some pop leanings as this song hovers on the anthemic with its singalong, chant-like lines. It’s very punchy while being set to the backdrop of spacey instruments that propels the reality they construct into the realm of imagination.

They also venture into post-rock with “Melody” being simply what the title suggests it is, a resonant tune that solely features instruments. It’s really a testament to their skill that they can keep listeners actively listening and captivated by their shifts in chord progressions and artistry. There is a meticulous wonderment to their craft, where barring any vocals, can be appreciated in its stunning glory.

Another interesting song off the EP is their cover of the Joy Division song “Ceremony.” Now that you’ve (probably) listened to a few AKUA tracks, it may be fair to say that AKUA draws some influences from the English rock band; from the way Hwang Jae-yeon’s vocals take on that affected delivery — similar to Ian Curtis — to the way Han Chan-yeong’s drumming flurries the edges of their songs.

While I bring up the similarity due to AKUA covering the Joy Division song, I do think that it is a fair critique to hope that AKUA will continue to find their unique voice — separate from their influences. Since they are a young band with a small discography, they have a lot to prove, and AKUA does attempt to put their own stamp on things. Their take on the Joy Division song is refreshing, busting out the acoustic guitars and stripping down the production. The vocals are clear, emphasizing the melody and giving a modern twist to the original song.

AKUA has a nice polish to their music, and their usage of the negative space in their recordings adds colorful layers to their sound. I can see them appealing to a wider set of fans with their dream pop productions that often spill into expansively large sounding songs, which aspire to corral big audiences into getting swept up by its grandeur.

For those who may not be convinced of their vocalist — due to the lo-fi singing on their other songs — they have also included an acoustic version of “AKUA Diving” on the EP. This song helps listeners get a clearer sense of Hwang Jae-yeon’s singing prowess and the harmonies of the band. The singing borders disaffected melancholy, but for the shoegaze style, it works for instilling that introspective quality, with the lyrics coming across as contemplative observations.

Sometimes, indie is restricted by geographic location — understandably — as bands set out to make a name for themselves within nearby neighborhoods. Though thanks to the internet, international audiences do have more accessibility than we otherwise would; the above is one of a small number of videos floating on YouTube capturing AKUA’s live shows. Here, they are performing two tracks not on their EP “I Don’t Know Yet” and a tentatively untitled song. While I had the misconception that they would be a more subdued band, their live shows prove the contrary. While their songs lean towards introspection, on stage they embody the rhythm and exude great energy.

While they haven’t released any official MVs yet, AKUA are a band making noise on many other outlets. Even their album art emphasizes the color of the band’s music — an oceanic blue, which coincides with their name. Their band name is fitting as they, at times, can have the capability of emulating the duality of the seas, with calm reflective tunes balanced by torrential electric guitar riffs. If you like what you hear, definitely follow AKUA on all of their social media platforms and catch their live show if you are able to.