VIXX Attempts to Push the Envelope with "Chained Up" 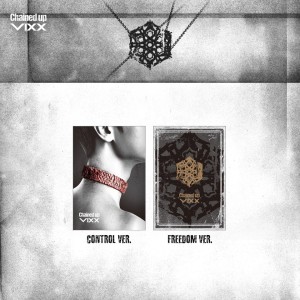 “Mistress” has a sinister curl to it. It’s a bit twisted, contrasting the higher tones with a dark underbelly. Think “This is Halloween”: deceptively playful composition draped in a heavy instrumentation in a minor key. Title track “Chained Up” continues what “Mistress” started, giving us music that wraps a bit of sweetness around a rougher, darker interior.

Placing the album’s most musically interesting songs up front leaves high expectations for what follows. Sadly, “MAZE” sets an unfortunate trend of typical and uninspired pop that follows convention, leaving a lukewarm impression. The album’s dance tracks err more on the side of watered-down techno. The music tries to be both exciting and laid back, but instead we get an uninteresting combination of the two with tracks like “Spider” and “Eternity,” the latter being the most overtly club ready.

Lyrically, we get more vague smatterings of perceived BDSM themes. “MAZE” is more a song about one lover giving the other the runaround, trapping him in a maze he can never get out of, thus never reaching his love interest’s heart but inevitably never able to leave her. “Spider” gives us a bit of scene imagery (“My body touches you and your hands around my neck follow /
The moment I turn my head”), but the sub in this situation has completely given himself over to his Dom without question and proclaims even if she takes everything from him, he only wants to stay by her side:

I’ll give you everything
No matter where as long as I’m next to you
I close my two eyes
She’s a poison spider
Break down!
At the touch of your tongue, my body fills with joy
This moment holding me back
Digging deeper, I’m trapped in your embrace forever
Even if you lose me like this it’s okay

“Stop It Girl” wraps a lovely vocal arrangement around an even lovelier melody. Though composition-wise it’s a bit simplistic, in that way in which most groups use the same construction for their pop ballads, there’s still something a bit unconventional in the track. Perhaps it’s the minor chord progression in the chorus or just the way the group’s vocals envelope the music, but “Stop It Girl” definitely endears itself to the listener.

This is where the play on opposites is highlighted best. We have what appears to be a soft love song when, in fact, it’s a tune of absolute obsession. The protagonist is determined that no other man should ever get close to his love interest, and he becomes crazed at the thought of her even so much as looking at any other man — to the point of being on the edge of madness, begging her to look only at him:

Will you believe me
My girl, my girl, just for you
I want to risk everything
Love me, love me, just for me
Can’t you smile
You please just look at me
You please be mine
Stop it now, Stop it girl

“Heaven” and “Can’t Say” stick to K-pop conventions that manifest themselves on most group albums, particularly of the rookies, who are given basic songs to work with and establish themselves in the genre. They’re either blindingly bright or dreadfully sappy (“Us Now”), a very stark departure from Chained Up’s darker intro. It’s tracks like these that convince me the producers were conflicted on exactly how to approach this album.

The midtempo tracks fare better. “Hot Enough” is unapologetically sexy. It’s unshy, both beautifully melodic and overtly sensual. We get more of the protagonist’s obsession with his lover; however unlike “Stop It Girl,” we get a man very much in control of what he wants. Instead of begging for attention for the sake of isolating his lover, he’s begging for the heated touches and tastes lovers share when they’re wanting to fully explore each other. The sexual tension inherent in a BDSM relationship finally delivers an unfiltered taste of the album’s supposed concept: “Trail your fingertips on my body / Shh- It’s not as easy as words / I think I’m going to melt.”

Musically, Chained Up demonstrates the dichotomy between aggression and softness. Naturally the dance tracks have a more belligerent slant than their ballad and midtempo counterparts, but there’s an undercurrent of something smoother. Even the dance tracks, with their grittier sounds that hearken back to the more techno-based K-pop of the late ’90s and early 2000s, aren’t abrasive. Rather each song on the album is seemingly constructed to appeal to every listener (throwing in some “la-la-la’s” for good measure). As a result we get an album that attempts to be thematically interesting but doesn’t quite get there. 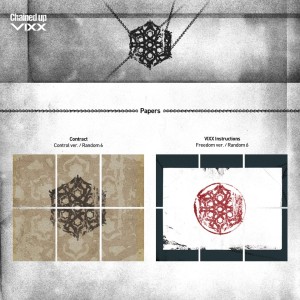 I applaud the album for some of its highlights and even its attempt at doing something daring. When it hits, it hits right on the money and manages to be both interesting and musically fantastic. But that’s what’s so frustrating about it. I want so desperately for Chained Up to get me excited about VIXX, a group I’m still on the fence about, but just when it starts to really get me going, it hits me with something more “meh” than amazing and leaves me cold. While it may be enough to keep me at least tangentially interested in the group, it won’t make me seek out anything they do.