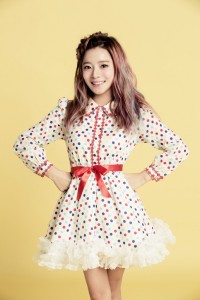 Summer is on its way out, and with it goes the last summer songs of the year! From big companies to obscure independent labels, this series looks for the unique and catchy songs that might have escaped your attention. Hopefully, you can find a new artist to root for!

Every once in a while I find a song that, within seconds, has me hooked. “To Love Needs A Reason” is one of those songs, and it just gets better every time I play it. Tae-in’s vocals and the instrumentation combine in a song that could have easily become a mess of sounds. But somehow all of the little bits come together into a really cool song. As you can guess from the title, Tae-in tells her lover that love has to come naturally; it can’t be fabricated.

You need a reason to fall in love, not a wavering reason
Don’t make it up on purpose either, find it naturally

I just like you, I still like you, isn’t that how love starts?
You look at each other and know, it’s because of that one look
That kind of thing is a real reason

The music video has some nice shots of the singer and her expressions and actually doesn’t need an actor to play the love interest. I like seeing people having fun being creative too, so the lack of a story-line didn’t bother me. My favorite part is the second verse when Tae-in surprises you with her powerful voice and changes up the music instead of using the same musical notes from verse one. There are surprises around every corner with this song!

Next up is the cute, yet strong, song “Pippi.” The girls dress up as Pippi Longstocking, a children’s book character known for her pigtails, and show what Pippi might have been like if she grew up. Pippi was known for her superhuman physical strength and independence. That same independent, unashamed attitude plays out in the song. 2EYES sing about how although they have grown up (My hair that I loosened won’t stay still), they still have the same spirit. They know exactly what they want, and if they don’t get it, they’re not going to bother sticking around.

You can touch my body, I’ll be a little more forward today
So be aggressive and put your hand on my waist
I don’t wanna be a tomboy, I’m a real girl
It won’t work out if you keep that up
If you keep timidly giving excuses, I’ll fly away faster than the wind

The music video also shows the girls transitioning from teens to young adults as they ditch their pigtails for sleek new hairstyles. They also get rid of their younger clothing styles like denim shorts and overalls for more “grown-up” choices. After their makeovers, the actor is more interested in them. But instead of rushing to be his girlfriend, the girls kick him to the curb for being so superficial. No matter what clothing they have on, they will always be “Pippi.”

Let’s take a turn into K-hip-hop for a while to enjoy Loco’s “Respect.” I love mixes of old and new, but this song showcases what hip-hop should be. Too often you see rappers taking shots at disadvantaged groups in order to try to build themselves up. Whether it’s Zico using a homophobic slur, or Jay Park objectifying women in “Mommae,” I lose respect pretty fast for people who beat down others to make themselves look good. At best, it’s a cheap tactic to get in the news; at worst, it can hide (or promote) some very real danger.

And this isn’t a “hip-hop is so sexist/homophobic/etc.” argument (because that’s not true). At its core, hip-hop is about attacking the institutions that keep others down, not joining them. And that means respecting other people regardless of gender, sexual orientation, or race. As Loco shows in this song and video, a truly confident rapper doesn’t need gimmicks to prove his worth. In the lyrics he talks about his past, from the traits he inherited from his parents to his Show Me the Money Days. He’s not ashamed of his humble beginnings and refuses to let the world dictate what his priorities should be.

I shine in my own way, being snobby is not my story
Because I respect you, I don’t judge you by your cover
Since I lived today, I’m going to face tomorrow, good morning
Since I came from the bottom, I know how to thank even the air
I respect myself, everything I’ve got is precious
I’m not ashamed or envious, I just go my own way

The video also shows respect in subtle ways. There are pretty girls in the video, but they aren’t props hanging off of Loco; instead, they take part in the fun and interact with him. Even the cars aren’t just props. Rather than just being in the background as accessories, they become a part of the story, objects with flash as well as function.

First kisses are center stage in Peterpan Complex’s “Moist.” It’s a sweet, yet funky, song that highlights the awkward moment just before a kiss. The lyrics describe the self-doubt, worry, and nervousness as the singer tries to confess her feelings. It’s interesting because we can see both the words she says directly to her crush and also her internal dialogue.

I have something to say, stay in front of me (don’t leave)
Please don’t laugh, why do people’s hearts flutter like this
Like a game, should we go out together?
Don’t say that either, don’t tremble
Anyway, you, did you break up with that person or not?
Don’t shake my heart

Her crush seems to like her too because the chorus describes their secret kisses immediately afterwards. The rest of the song describes her feelings being kissed, from the nervousness that makes her shiver, to the pure, happy feeling she has. The music video is a little confusing because at times there seems to be a story-line, but at other times it’s just shots of the band having fun. We see some scenes of the singer at the beginning practicing what she’s going to say and deciding what to wear for her confession. She makes her entrance, and the guys seem surprised at her new style. But then again, it’s confusing which guy (if any) she has the crush on. The song is fun to listen to though, so I can forgive a them for having a confusing video.

Don’t let the bright colors and cutesy choreography fool you; this is definitely not an “Oppa look at me!” song. Ben turns breaking up into a party in “Looby Loo.” The cavity-causing sweetness of the melody is balanced by the surprising lyrics. In them, she tells her friend to forget about her ex-boyfriend and tries to cheer her up.

In the two versions of the chorus, she congratulates her friend for breaking up and tells her to hum “looby loo” when things get tough. She tells her that she can wear the clothes she wants and encourages her to move on. The song is very different from the usual ballads Ben is known for (she also has an awesome cover of “Eyes, Nose, Lips). But the cutesy aspect of the song is part of the message. The nursery-rhyme like melody is meant to stick in your head and lift your spirit with its child-like innocence. This carefree tone is perfect for someone trying to get over a breakup because it puts things in perspective. Losing a bad boyfriend isn’t the end of the world and should be celebrated with unbridled joy instead. Check out the rest of her mini album which shows all of her different sides!

And that’s it for August! So readers, what were your favorite August songs?