Red Velvet Expands On Boldness In 'The Red' 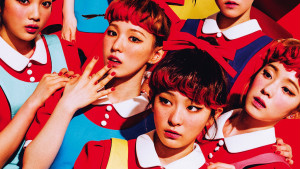 I’ve always admired Red Velvet for straight up admitting to a future of switching between bold concepts and sultrier ones. According to SM, it’s literally in their name.

Of course, this has the obvious problem of risking alienating fans who prefer either the zaniness of “Ice Cream Cake” or the sultry “Automatic” but dislike the others; leaving many waiting for the moment that one sound or the other became their dominant concept. When it was announced that their first album was to be called The Red, it looked like SM had decided where their cake was frosted.

Nowhere does that seem more obvious than with title track and album opener “Dumb Dumb”. While the MV is a fabulously symbolic headtrip, listening to The Red reveals a fatal flaw in the song: “Dumb Dumb” does not work without visuals. It is an atonal mess, by which I mean it literally does not have a consistent musical tone. There is no steady melody, with the instrumentals bouncing back and forth between drum and bass, keyboard effects, a heartbeat and the unending repetition of “dumbdumbdumbdumbdumbdumbdumb”. The chorus and bridge are delightful, but without anything to look at, “Dumb Dumb” dissolves into a cacophonous mess.

“Huff N Puff” takes its’ cues off “Dumb Dumb”, in all the worst ways. While the various elements of “Dumb Dumb” actually manage to blend, in “Huff N Puff”, it feels like the production is at war with itself. The marching band sound of the chorus gets cut off by the electro-club sound of the pre-chorus build, and that gets eaten by dubstep. Nothing here flows. Rather than chunks of the song feeling separate, the clashing instrumentals sound like three versions of one song layered over each other. What’s worse, it buries Red Velvet’s solid vocals underneath the noise. 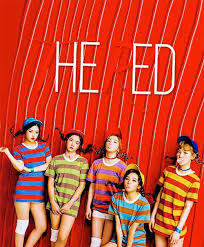 After two crowded, chaotic tracks, “Campfire” is a soothing slowdown. The mess of “Huff N Puff” is replaced with some groovy electric guitar and a funky baseline that take their proper place in the mix: behind the vocals. Their soft voices fit the imagery of falling in love over a campfire; the boldness of darkness, the romance of the heat and stars. Every member of Red Velvet delivers crisp, clear vocals, but Seulgi‘s crooning and Joy‘s sassy speak-singing are true standouts.

“Red Dress” is, simply put, “Dumb Dumb” done right. The snap/claps during the verses and the guitar pickup in the pre-chorus provide a solid musical tone throughout, a unified musical backbone that keeps the horns and dubstep from feeling out of place. “Red Dress” thrums with energy, riding the insanity of the production rather than drowning in it. The vocals take some great risks with the arrangement, like putting the longer notes before the chorus and having the chorus build by going down the musical scale. The end result is that “Red Dress” feels experimental and quirky, but not crowded or gimmicky.

“Oh Boy” is a filler song, but a good one. It harkens back to the late-90s R&B sound, marrying the jazzy elements seen in TLC and Destiny’s Child to modern electronic production. Unfortunately, it brings back the chaotic feel from the opening of The Red. The piano is layered over heavy synths that starts off fine, but wear you down quickly as the song goes on. The saving grace, though, is the precisely on-point vocal delivery of everyone. Each note is cut off just a hair earlier than expected as they sing about their new prince charming. This creates a dynamic where Red Velvet is too busy being with their new boy to have time to talk about him.

Instead, they do that in “Ladies Room”, which wins all the points for most creative song topic ever. If any guy has wondered why girls go the bathroom in packs, this is why. The mellow, airy 1980s synths are the perfect soundtrack for a group of girlfriends meeting up to compare notes over guys while refreshing their lipstick. “Ladies Room” is much lower-energy than the first half of The Red, letting listeners catch their breath and thoughts. The vocal arrangement is beyond killer, relying on counterpoint harmonies with unison lyrics. 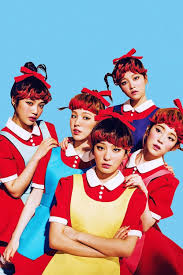 “Time Slip” follows “Ladies Room” as far as unorthodox song topics go. It’s an ode to those fuzzy minutes when you first wake up, neither awake nor dreaming. One minute, ten minutes, thirty-four minutes; it’s all the same, and all anyone wants is to roll over and go back to sleep. The chorus captures the hazy feel by matching the airiest vocals thus far, courtesy of Wendy and Yeri, with some lighter, twinkling synth piano. Sadly, the effect is ruined by the heavy stomp-clap and random deep male chanting, which serves to jolt the listener out of their haze in exactly the way “Time Slip” is not talking about.

As the album winds down, we get two songs that feel out of place. In many ways, “Don’t U Wait No More” is not a song. Rather, it’s more like listening to a cheer-leading routine. Actual singing is toned town in favor of a track that is mostly speak-singing layered over a stuttering beat that sounds like it’s marking time rather than backing what is ostensibly a musical work. It’s repetitive and dull, lacking any sense of musicality. “Day 1” is out of place on The Red, a track marked by typical production rather than the offbeat energy audible even on “Campfire” and “Oh Boy”. “Day 1” is the union of elevator music and Las Vegas showtunes, and while it serves as a great platform for the upper registers of Red Velvet, it manages to sound nothing like a group whose entire shtick is hitting both ends of the musical spectrum.

Finally, “Cool World” closes out The Red, and provides a much better ending note than either of the prior two songs. It’s a laid back song that really allows the vocals of Red Velvet to echo around the beat, which is basic, but with dynamic enough vocal arrangements to compensate. Irene‘s delicate soprano in particular works with the thudding beat to create a paradoxical but fabulous piece. “Cool World” oozes with the quiet confidence of ruling the world and just enjoying the power, rather than lording it over anyone else.

As a whole, The Red definitely lives up to the expectations of Red Velvet’s prior “red” releases. It has resounding flaws with production being too chaotic and disorganized. Yet, The Red also shows how Red Velvet’s disparate concepts could meld one day, with the smoother “Campfire” and “Ladies Room” making up for the calmer music with more assertive lyrics. There’s a lot of potential here, especially with the vocals, which are always crisp, clear, and steady, even if they are frequently drowned in noise.