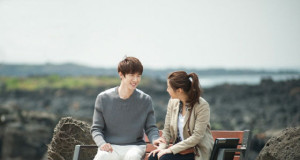 Warm and Cozy concluded its run on July 2nd with a fragrant batch of newly baked matrimonies (some of which were potential), malevolence-be-gone and merriment.

After viewing the last three episodes of this drama, I have established that the “charming repetition” of Geon-woo and Jung-joo’s romance from the previous set of episodes is the unsteady anchor of the entire drama. She evades the one ripe fruit grown of his volition (which harks back to his promise at the beginning of lending her the restaurant until she dies) and constantly turns to leaving everything she worked so hard for behind. And he escorts himself out of Jeju Island’s front doors and out of the lives of those he loves simply because everyone (including his own mother) tells him that his father is a gloomy phantom with an unholy scythe: Geon-woo is his father’s son, so he too is at fault.

In hindsight, while everyone else on Jeju Island enjoys camaraderie and comfort, Geon-woo and Jung-joo survive the trials shoved upon them by having a few conclusive seconds of rudimentary loving and are then cleaved apart by the problems of those around them and their own miscommunication. 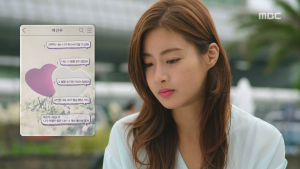 In the later episodes of Warm and Cozy, the irregularity of Geon-woo and Jung-joo’s relationship could have easily been quashed simply because their romantic rivals faded into the shadows; the caterpillar let forth his inner beauty by giving Jung-joo the freedom to pursue her love and making a tentative peace with Geon-woo, and the queen bee was overthrown and found her place at the bottom of the hierarchy when she was confronted by a stringent Jung-joo and an uninterested Geon-woo. The Hong Sisters’ writing in these critical sequences makes a point of stating that the love rivalries surrounding Jung-joo and Geon-woo are much less momentous than other dilemmas, like Geon-woo’s ties to his father, mother and Hae-sil and his inadequacies as a lover to Jung-joo. Jung-joo’s helplessness lies in her inability to come terms with her love for Geon-woo and whether she should move on.

In this case, the writing succeeds in stamping Warm and Cozy as a melodramatic mixture of romance, rivalries and the rockiness of familial relationships. Even though Geon-woo’s father attempted to make a foray into his son’s restaurant, and at one point was even served a warm and cozy meal by Jung-joo, the disconnect in his acquaintance with his son’s important person is evident. I was anticipating the heartfelt conversation between him and a kind yet nameless young woman to have more enormity. Their encounter should have been more allusive and underlying even if Jung-joo was not told the story. At the same time, it should be noted that the briefness of this vital scenario and its solemn hues were handled with levity by Jung-joo; she served a man with sad eyes a very cozy meal and told him the truth about his love for Geon-woo’s mother without even knowing who he was. 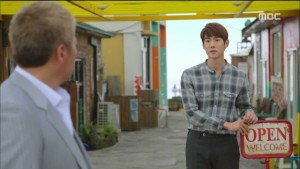 While Geon-woo and Jung-joo attempt to mollify their own problems, romance blossoms for comrade Poong-san and caterpillar Hwang-wook each. Poong-san’s role as the loyal friend and matchmaker is prominent in the drama to a degree that places him as a dynamic character capable of having his own love story. He finds himself in a budding love with the only one of Hwang-wook’s relatives who fortuitously doesn’t look like him: his niece Hwang Yu-ra. The beautiful Seohyun makes an ephemeral appearance as Poong-san’s love interest and endeavours to get her uncle a good seat next to Jung-joo. Either way, her sentient little entrance gives Poong-san an inimitable dynamism and adds another dash of wholesomeness to Warm and Cozy overall.

Meanwhile the caterpillar is given nary a minute to wallow in his own lonesomeness because he is chased fanatically by Geon-woo’s elder sister Cha Hee-ra (Ok Ji-young). While Hee-ra was portrayed as a busybody with a penchant for parasites and a hatred of gold-diggers, she was actually a very thoughtful elder sister who did not want to see Geon-woo get hurt and honestly accepted Hae-sil after she married Jung-geun. Her potential romance with Hwang-wook was foreshadowed at Jung-geun’s wedding when they were seated near each other and was later revealed to be even more plausible when she saw Hwang-wook break down into tears. I like that the progress between these two characters was indicative of romance and instilled in viewers the idea that Hwang-wook was not one of those second leads who gave up everything and got nothing in return. 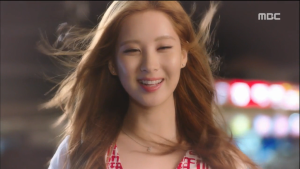 Hae-sil’s troubles consumed the minds and affairs of the townspeople prior to and after her marriage, but her perseverance and Jung-geun’s earnest love for her lead them to a happy ending. When it was revealed that Geon-woo’s unstable mother was the one who actually killed Hae-sil’s late husband, the plot could have taken a much more explanatory and satisfying turn. Instead, Geon-woo’s father was officially allotted the neglect and hatred, and memories of his mother were blurred by a sort of disappointing assent. I would have liked it if Geon-woo met up with his father and had a face-to-face conversation with him, ultimately coming to some sort of agreement instead of leaving the dysfunctionality of their relationship open-ended. Though in retrospect, father and son parted ways in the way they were destined to, each carrying his own sympathies and silent acknowledgement at heart. 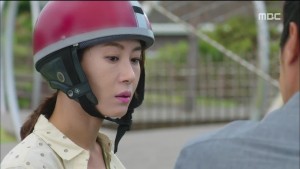 So readers, I had imagined Warm and Cozy to be a courageous tale of passion and pain on the stunning Jeju Island but met up with some minor disappointments. Lee Jung-joo was admirable as Miss Attentive Ant, sifting through the messes around her and collecting the most wonderful and happiest of treasures. On the other hand, Baek Geon-woo spent his life as Mr. Gallant Ant quite too gallantly and immaturely. He would have been a more lovable character if he was not so late to recognize his love for Jung-joo and if he had been more honest with her. Disappointments aside, both of these characters came together in the most loving and substantial of ways. They vanquished their foes and rivals, threw aside their familial disharmonies and finally found each other in the end. Let me reiterate that Warm and Cozy was an especially intriguing drama because of its location and landscape, its recipes and recommendations and its cameos and cast.

Readers, what did you think of Warm and Cozy?