Warm and Cozy, Episodes 9-12: A Vampire Carp with a Good Memory 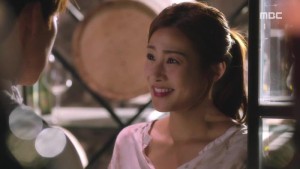 Although Warm and Cozy is an especially unique and amusing K-drama full of funny and fuzzy antics on Jeju Island, the episodes following my last review seem to have ensconced the progression of the plot and the relationships among the two main characters in an unnecessary (albeit charming) repetition. One would expect Geon-woo and Jung-joo to finally accept one another after the entire terminal illness travail, the impromptu contract, and the all-too-expected frolicsomeness and ambience thrust upon them. And yet, the romance is still one-sided with a steadily exasperated heroine and a faithfully immature hero veering into and out of the vagaries of selfish selflessness.

On a more pleasant note, the caterpillar is finally bursting out of his shabby shell and giving substance to that beautiful glint in his eye. Mayor Hwang-wook always manages to shove an instantaneous itinerary for marriage into his conversations with Jung-joo, but bravely encourages her to rise against Geon-woo’s indecisive heart and pursue a relationship with somehow who cares only for her (namely himself). Queen bee Ji-won no longer has a claim on Geon-woo’s heart and has retreated to the shadows where she belongs, although she probably isn’t done wrecking relationships and making plans for getting her throne back yet. 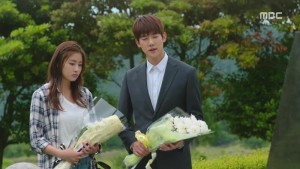 What prompted me to do my investigative research was the scene in episode 12 when a ravishingly comical Jung-joo attempts to coax a reaction out of Geon-woo who in turn embarrasses her by forcing her to recall an unwanted memory of her drunken incident. Subsequently, Jung-joo’s quasi-vampiric persona and flirtatious posture can’t hide her actually-there memory and only lead Geon-woo to teasingly cite her as a vampire carp. My research upon completing episode 12 led me to two fascinating tidbits of intel (one of which is not scientifically factual); the first being that the treat Geon-woo prepared for Jung-joo in hopes of personifying the vampire carp (and evoking rumblings in my stomach) is a Korean summer dessert called “Samanco,” and number two is a not-proven-by-science belief that carp have a memory span of about three seconds.

Science aside, Warm and Cozy itself has proven the carp memory myth wrong by preserving Jung-joo’s memory of Geon-woo coming to pick her up and take her home when she was drinking with Hwang-wook. The mechanics of this seemingly comedic interlude conceal a deeper development in the plot and their relationship. Geon-woo’s pet name for Jung-joo works in duality while summoning a memory of the time when he actually acknowledged his feelings for her and called her his girlfriend, and blurs her recollection of his confession and provokes her to take Hwang-wook’s guidance to heart. In this dramatically sentient twist, Geon-woo is the one fending of Ji-won (whose tears are quite despicably empty) and trying to reassure Jung-joo of his enduring affection, while Jung-joo is the free spirit chained down by her feelings for Geon-woo but desiring to move on and forge a relationship with Hwang-wook. 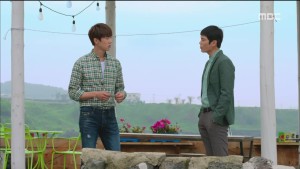 The truth of the matter is that they are both lonely and have been left by their parents; hence, this set of episodes attempts to shine a light on their parentage while giving hope and setting in cement the idea that only they can understand and comfort one another. The succinct entrance of Jung-joo’s mother dallies around an internal problem and leaves the question of why she never bothered to contact her eldest daughter after she divorced her husband, but is immediately alleviated when Geon-woo steps in for Jung-joo and settles the formality and sorrowful truth her mother was sweetly masking. Here Mr. Gallant Grasshopper illustrates his love for Miss Attentive Ant by utilizing his caring and innocent nature – he selflessly gives for the sake of salvaging Jung-joo’s relationship with her mother and half-sister.

The enigmatic entrance of Geon-woo’s father does not only dally around an internal issue, but also around a very external one. Jung-bae ahjusshi (Lee Han-wi) confronts Geon-woo and throws the plot into a boiling vat of suspense by revealing that Geon-woo’s father murdered Hae-sil’s late husband. As Hae-sil enjoys herself and tries to love once more for the first time in 30 years with Jung-geun, the truth tragically ties their love and families in a hidden connection. 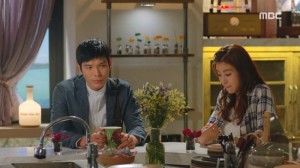 At the climax of Warm and Cozy it is difficult to see Geon-woo struggling by himself and evolving into a more hardened and desperate character, but I have the belief that just as he was there to resolve Jung-joo’s personal problems, she too will be there to give all that she has for his sake and his sake only when she finds out about his problems with his father. This set of episodes no longer enhances their push and pull relationship, but solidifies their love for one another as they tread through difficult times and makes us want them to expose to everyone around them that they love each other deeply.

Readers, what is your take on the direction of Warm and Cozy thus far?