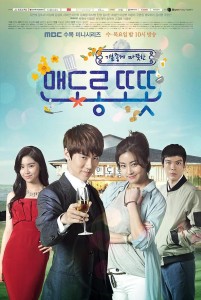 Upon watching the first two episodes of Warm and Cozy, I superficially brushed off any more allusions the title of the drama might have suggested. But of course Warm and Cozy is the name of Geon-woo’s pretty and picturesque little eatery, the seasonally serene temperament of Jeju Island and the Hong Sisters’ twirl on the climatic impetus in Aesop’s fable about two natures with completely different approaches to life. Now, after following Geon-woo and Jung-joo around Jeju Island, I have not only realized that their inverse natures gather at one watering hole, but I have also learned how to make my own additions to titular allusions. Hence, the plot and character development in episodes three to eight of Warm and Cozy unfolded in such a way that I could not help myself any longer and took the liberty of exclusively renaming the drama Warm and Cozy and Fuzzy.

In the next six episodes of Warm and Cozy and Fuzzy, the feelings that Geon-woo and Jung-joo start to develop for one another are so fuzzy and tender that they allow us just enough room away from the reality of all else, including the confirmation of she-devil Ji-won’s motives, Mi-ra’s (Kim Mi-jin) wish to unintentionally ruin the lives of the two protagonists through her novel and Jung-geun’s (Lee Sung-jae) pathetic attempts to woo Hae-sil. 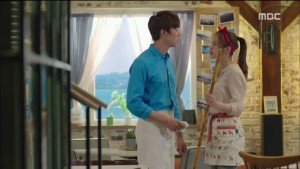 The first two episodes of Warm and Cozy stretched Geon-woo and Jung-joo’s platonic relationship a few extra inches into the following episodes but stopped just before Jung-joo’s heart was about to break, additionally sewing some romantic concern into Geon-woo’s mind as well. It is obvious that the medical misunderstanding between the two initially fuels Geon-woo’s distress, but I wonder where Poong-san’s transformation of that misunderstanding into a little white lie will do to his relationship with Geon-woo in the future.

If Geon-woo promises to love Jung-joo regardless of her health (which is yet to be determined, but distinctly for the better), Poong-san’s lie would be irrelevant; however, if any tension develops between the two, Poong-san’s lie would be in vain. Either way, his intentions are pure and only seek to help his friends settle their feelings for one another. I hope it’s not just me, but I would really like to see the Hong Sisters flesh out Poong-san’s character and embroil him in a romantically comedic love story of his own. 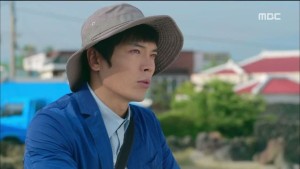 While all is slightly kooky but firm with Poong-san, a fickly pleasant unveiling has occurred in light of Ji-won’s true character. She is a cold and cruel puppeteer seeking out Geon-woo for her own whimsies and assuring him of her evilness while concocting up plans to seduce his elder brother Jung-geun (who in his own, slightly obnoxious way, loves Hae-sil) to make it to the top. Ji-won’s appearance does not agree with her temperament, but her body language and speech do wonderfully; as she strung the helpless Geon-woo along like a fiddle, I found the contrariety in Jung-joo’s sensitivity for his state so beautiful and potent — it was just a matter of time before Geon-woo found himself caring for her in multitudinous ways — and far more than the beautiful but scheming Ji-won.

Meanwhile Jeju Island is the perfect destination for yet another cameo following that of So Ji-sub in the first few episodes. While the lady diver school runs its auditions for new applicants, Jung-joo meets Sam (Sam Okyere): a foreigner interested in becoming a diver. Although succinct, the appearance of Sam and the additional foreign applicants to the lady-diver school transforms Jeju Island into a cosmopolitan novelty open to all, ready for all. Aside from being filmed on the mainland, Warm and Cozy transforms into visibly brighter and crisper K-drama with diverse individuals vying for a niche in Jeju Island’s unique cultural faculties. 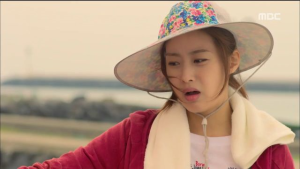 And just as all heroes are wont to encounter, Geon-woo’s love rival Mayor Hwang-wook, is set on accidentally “getting married” to Jung-joo. He is admirable in that his attention towards Jung-joo is genuine and uncontested; he met Jung-joo, talked to her, saw her a couple of times making an effort with the townsfolk, and subsequently fell in love with her. Although he makes numerous attempts to get on her good side, what would give Hwang-wook a better chance at swaying Jun-joo’s heart would be if he expressed himself and how much he cares for her to an extra degree. As of yet, he is a bit stiff and quirkily unclear. One thing that is certain is that he is not a maudlin and mopey second-lead willing to destroy the life of the one he loves: Hwang-wook is dignified and circumspect and therefore a plausible match for Attentive Miss Ant. If she’s the ant, and Geon-woo’s the grasshopper, then what does that make Hwang-wook and Ji-won? I say Hwang-wook is the caterpillar comfortable in his rural and unsuspecting skin while hiding the beauty and charm within, and Ji-won is the apathetic queen bee commanding those she sees, whom she can’t help but bitterly tease.

As displayed through its recent episodes, the Hong Sisters are working their metaphorical magic and spinning Warm and Cozy into something beautiful and exciting, potentially trimmed in tragedy but all the more fuzzy (and realistic). My hopes for this drama continue as I wait for the unfolding of Geon-woo and Jung-joo’s parentage, the growth of their love for one another and the exact moment they triumph over the queen bee and somehow let the caterpillar down easy.

Now I leave you with a question readers, will Geon-woo and Jung-joo be able to face their foes and challenges?