Not Moved by Sistar's "Shake It" 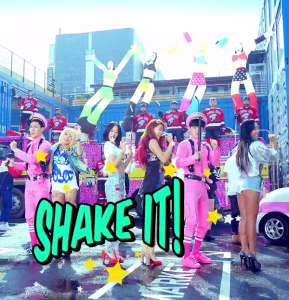 It is summertime in South Korea, and with that comes a Sistar comeback. This time, they have returned with high energy ditty “Shake It.” While Sistar has been trying to drive home this seasonal association with three years of successive summer singles, will this release really make them the queens of the summer time?

Part of the allure of Sistar is their ability to drive a high energy song with their pronounced vocal flair. Hyorin and Soyu are dynamic vocalists with unique tones, Bora has her own style of idol rap and Dasom typically gets a section that suits her voice. Add some dance beats and the formula has proven successful. But, there has always been an additional sensibility that gives Sistar a fresh act in the game and their prior releases have all added that extra spark. Even “Touch My Body” — which I felt was their weakest release musically — offered a unique point dance and a memorable chorus.

“Shake It” feels like the team behind Sistar has run out of ideas. They aren’t treading any new ground and the music falls by the wayside to give in to an upbeat theme. To be fair, the aesthetic of the MV is a zany intersection of comic book animations, work out enthusiasm and school troublemakers. However, that still isn’t enough to tide me over when the music lacks pizazz. I may be misguided but I attribute some of the blame with (the surely overworked) producers, Duble Sidekick.

On any given week in the past year or two, it wouldn’t be surprising to see two or three Duble Sidekick songs (by different artists) competing on the charts. At times they will have an inspired run of songs that maintain a unique style and vision. “Shake It” just isn’t one of them. To me, it feels like something that would only really work as a Disney parade anthem. While the simplistic pop number is likely what the team wants to accomplish with all of these successive summer releases, it is still  nonetheless disappointing because of how pedestrian the end result is.

While Soyu and Hyorin have stellar voices, they don’t shine in this song. The loud horns, random “woos” thrown in, and shouting choruses constrict the range to a limited level, and the voices have very little room to impress or emote much (except for overly ebullient delight).

The story of the MV is a bit all over the place. At its core, it is a story about four troublemakers (Sistar) stirring up their chemistry class and, later in the video, the hockey team with their energetic shaking dance. The plot is barely there as they follow a guy who is desperate to impress Sistar. Random sections are mashed together including some comic book influences, colorful special effects, animated words, a section of Sistar doing yoga and a canonball shooting pink fire truck. Monsta X members Shownu and Wonho also make guest appearances as two random males in a clothing store, two members of a hockey team and as cops who have come to take the ladies of Sistar at the end. The video does take on a whimsical air, so the mishmash of a plot really isn’t a big issue. 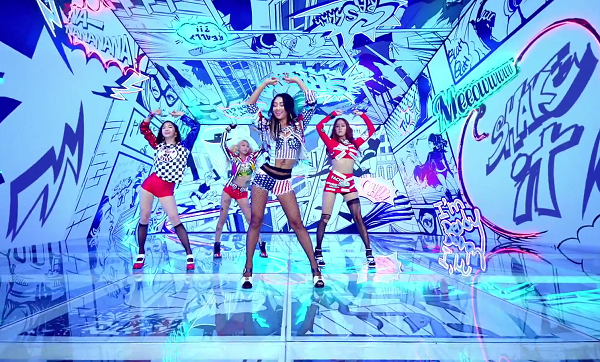 While the story is all over the place, the aesthetic does have its own point of view. The vivid colors and comic book graphics both add warmth and lend comedic elements to the video. The comic strip set that they danced in was extremely well done and executed. They looked like moving characters in their own comic strip.

The MV functions as one big summer block party. It’s fun and vivacious and effusively colorful. It’s okay to match a fun song with the energy of the video, but they could have done a better song with a shred more of substance. The whole meaning of the song could be boiled down to their shaking hearts leading to them shaking in dance together.

“Shake It” is pop in its most basic form. The purpose is to make you get up and dance and Sistar, by all means, accomplishes this. However, it still doesn’t make “Shake It” a better song by any means. The hook is dull and the instruments are lackadaisically adorning what semblance of a melody lies underneath the pop sheen. The aesthetics in the MV are a home run, though, as the video’s visuals are greatly accentuated by the comic style and its in-your-face excessive color and personality. Sistar have a summer hit on their hands, but it is also their least inspired one yet.

Did you enjoy Sistar’s latest single? How do you think “Shake It” will stack up against the other girl group comebacks this summer?