It’s been a long journey for Shinee in the K-pop industry. From clueless teenagers running after noonas in “Replay” to noonas running after clueless men in “View”, Shinee has finally transitioned into the ‘manly men’ sphere. With Taemin’s longest ambition finally fulfilled, it’s worth our time to reminisce exactly what Shinee has left behind.

A remake of Corbin Bleu’s “Deal With It”, “Juliette” decides to do away with the machismo and ruggedness and replaces it with svelte masked Romeos staring at a masked but amused Juliette (Krystal). Living up to its repute of absent storylines, SM did not provide this song a strict narrative or direction causing the few party (masked carnival? Dionysian revelry?) scenes to not add anything to the mystery or its unraveling. The main attraction, like most Shinee music videos, is then the choreography.

In a bid to woo a radioactive playful fox Juliette who is as bright as a torchlight, Shinee breaks out into its mating dance, complete with appreciation of her S-line; but this mating ritual is neat, crisp and so on point that you can’t help but be seduced. It is also complemented by the sharp voice of Jonghyun doing absolute justice to those high notes and Onew’s delightful vocals. I’d rather not comment on Rap God Minho but let’s just say Key saves the day. 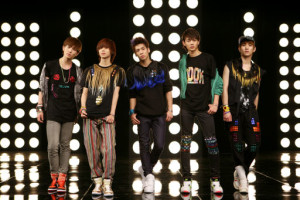 BDancing and singing aside, you know what’s the best bit of the music video? The fact that the boys look so damn cute and adorable. Not the 25-year-old sorts but the 5-year-old kind. The influx of boy groups with a more masculine onstage persona has been much appreciated; but I cannot help but miss the flower boy concept which usually ignited the insatiable desire in fans to go squish teddy bears. They practically look like boys who still believe in Santa Claus and leprechauns!

Which is why the entire concept of Romeo wooing Juliette with “poisonous lips” just doesn’t work. It is not as if the original Romeo and Juliet were any older or mature but at least then, Romeo only restricted himself to penning embarrassing sonnets, and definitely did not gather his bros to do the same. Shinee’s “Juliette” is more like Draupadi’s swayamvara with Minho taking all the first steps while the rest just tag along to reap the benefits.

The innocence with which the boys played the awkward Romeos gets lost in the Japanese version. You can see SM has gotten richer and more sophisticated in its treatment of boxes; the colors have been toned down, there is an excess of “charismatic” glaring, Juliette has turned into Cinderella, and most importantly, Minho is no longer the leader of the awkward initiation squad. Taemin, by this time, had already started whining about turning manly and the short blonde hair didn’t create the same charm as the permed red one. Two things remained unchanged: Onew was still stuck in time – he hadn’t grown older or younger and hadn’t sold himself to the sexy charisma syndrome – and Key continued as a victim of bad fashion.

Beneath the over processed composition of “Juliette” lay a solid musical base and no, it wasn’t an awesome live performance which revealed that but rather the acoustic versions. Jonghyun sang a version of it during the SBS Gayo Daejun stressing on his falsettos while IU brought a whole new level of simplicity in her version. What the acoustic version revealed, apart from how the title track essentially functions as a dance version, is that it fits seamlessly with the musical structure and composition of the Romeo album. All the songs in the album range from slow to mid-tempo, “Juliette” being the glaring exception. In terms of a development from Shinee World, Romeo wasn’t only consistent but showed exceptional improvement in trying out a different and mature mood, be it the mellow “Please, Don’t Go” or the sensual “Romeo + Juliette”. 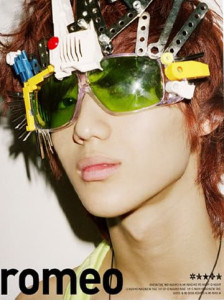 However, despite that Shinee couldn’t have done without “Juliette” as the title track. “Replay” and “Love Like Oxygen” worked because they were all portrayed as young and uncertain boys in love. People weren’t ready for a suddenly mature Shinee who would be aware of both heartbreak and sensuality. Moreover, representation would have proven to be a huge problem. Only “Juliette” allowed childishness and awkwardness to prevail packaged within glittery costumes and sets.

This is why I have been reiterating Shinee’s smart relationship with masculinity. The group took its time to try and test various kinds of masculinities before conforming, although still not completely, to the conventional definition of manliness making fans wait for years before something like “View”. Taemin, of course, has been the poster boy of such experimentations but “Juliette” was the one MV where all of them donned a much softer masculinity before shedding it bit by bit, one MV at a time.

The most brilliant memory that I have from that era is the pole dance the group was asked to do on a show coincidentally named Flower Boys’ Generation and how Key just absolutely nailed it while Minho took the challenge way more seriously than he should have. Variety newbie Taemin could barely do anything except blush like a new bride. The “sexy dance lesson” would soon enough be a lesson the boys wouldn’t require having mastered the lip swipe in “Ring Ding Dong” and the hip thrust in “Lucifer”.

“Juliette” isn’t just one of Shinee’s many songs. It is a key song in mapping their growth as idols and patterning their marketing styles. It is also one of the many reasons why SM should employ Rino Nakasone as their go-to choreographer.