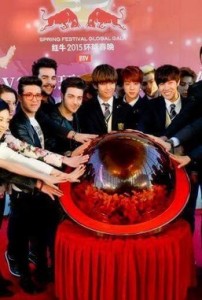 To many K-pop fans, especially those outside Europe (and Australia), Eurovision may seem like a strange, foreign entity that has no place in their lives. But I argue that we may have more in common with the event than we think. I mean, fans are already circulating this image of BTS with this year’s Italian entry, Il Volo, but there ‘s more to it!

The Eurovision Song Contest was launched by the European Broadcasting Union (EBU) in 1956 as an exercise in unity and live broadcasting, to help repair relations after the events of World War II. Based on Italy’s San Remo Festival, the contest had performers from each of the EBU’s member countries perform a song in their native language, with the winner determined through jury vote.

Much has changed since then: the number of countries in the EBU is greater — some, like Israel, Armenia and more, aren’t even part of Europe itself –, results are decided through a mix of jury and public voting and the cost of hosting the event has gone through the roof (Norway’s NRK had to sell its broadcast rights to the FIFA World Cup in order to fund the contest in 2010) but the drama — and music — still remain.

Currently, participating countries hold their own contests to find the performer(s) and songwriter(s) who will create that country’s entry — all songs performed at Eurovision have to be original compositions created especially for the competition. Then, entrants compete in one of two semi-finals, with viewer and jury voting determining the top 10 acts from each semi to move on to the grand final. These qualifying acts are joined by the Big 5 — Italy, France, the UK, Spain and Germany — and the host country’s entrant, for a total of 26 participants in the grand final. After all the songs are performed at the final, a last round of voting takes place. The votes from each country is counted… And then presented.

The tallying of the votes is as much fun — if not more — than the performances themselves. Each country has a representative, usually from that nation’s Eurovision broadcaster, who presents the votes given to the other countries participating. These representatives are usually some kind of media personality, and many of them are not averse to making the most of their time in the spotlight. 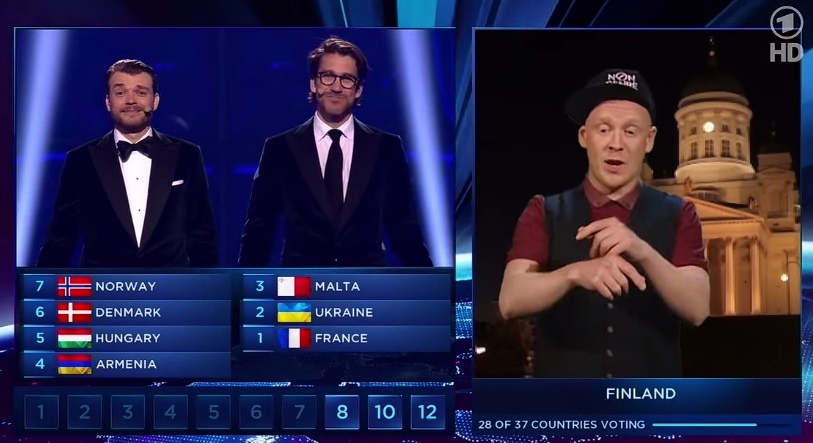 You know at least three representatives are going to start singing (or rapping, seen above), wear some ridiculous outfit, try some other attention-grabbing stunt, or all of the above. The only thing more certain is Greece and Cyprus awarding each other douze points (12 points, the maximum number you can award a country) when possible. Whichever country received the most points is crowned winner, and host of next year’s contest. Of course, considering the high cost of hosting, winning is not always in a country’s best interest — Ukraine actually pulled out of this year’s competition citing cost as one of the reasons.

Excluding the vote count — which is something uniquely Eurovision — you could think of the event as like the awards shows we see in the Korean music industry, with its mix of jury and fan voting. But, really, it’s more akin to a weekly music show, albeit on a grander scale. Think about it — a bunch of acts performing a song live with choreography, props and fireworks, all for the chance to hold aloft a shiny trophy? Where have we seen that before?

Eurovision is now broadcast in non-participating countries as well, including Australia, India, Jordan, Egypt, the US, Canada, Hong Kong and… South Korea. This hasn’t translated into Eurovision becoming something of a cult hit there (unlike in Australia), but there are Korean fans of the competition and the country even participates in the what could be regarded as its Asian version, the ABU Song Festival — South Korea actually hosted the inaugural festival in 2012.

Eurovison’s influence can be seen to have spread further, however, especially into the K-pop scene. The most notable similarity would be in the shared musical influences: dance pop is very popular, as are ballads and the odd pop-rock band — and let’s not forget SM‘s taste for Scandinavian compositions, either. It’s inevitable that some composers of SM songs have also penned songs performed on Eurovision. But there are many more similarities to be found outside the music itself. 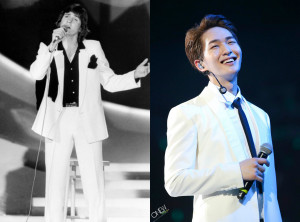 First off, there are the white suits. These are a Eurovision staple, made famous by “Mr. Eurovision” Johnny Logan in the ’80s, and are worth a skol in Eurovision drinking games. I’m pretty sure it’s half the reason Azerbaijan won the contest in 2011.They are a staple in K-pop too, with most (if not) all boy bands having worn a white suit or all-white outfit in a MV or on stage at some point in their careers. Girl groups have joined in, too, with SNSD and Dal Shabet being recent examples of this.

And while we’re talking about colours, let’s not forget about silver, which is basically a jazzed up version of white for when matte is not enough. Of course, the general craziness out the outfits overall has to be mentioned as well. Iceland’s 2014 entry, Pollappönk, was likened to The Wiggles thanks to the extreme blocking, but they would remind many K-pop fans of Shinee‘s Listerine outfits.

Another similarity is in the theatricality of the stage performances: as mentioned before, pyrotechnics are big in both Eurovision and K-pop, as are LED screens (especially of late) and props. Granted, Eurovision props tend to be bigger than K-pop ones, and more creative — Ukraine’s hamster wheel from 2014 is still a personal favourite — but I am yet to see a Eurovision act work a couch like some idols do.

Then there’s the aforementioned Eurovision Big 5, analogous to our Big 3. The financial and cultural influence of these Big parties means that their inclusion –and repeating everything in French, for Eurovision — is necessary. There are exceptions, though, like Italy’s numerous withdrawals and YG acts not being seen much outside of SBS.

The rise of English as the global lingua franca has also affected K-pop and Eurovision. The latter used to have a rule that all entrants were to sing in their country’s native language, until a streak of wins by Ireland — one of the few participating countries which had English as an official language — led to the rule being abolished. Most of the songs are now performed in English, or at least have a few words thrown in, as we often hear in K-pop songs.

Since the breaking up of Eastern Europe, and the entry of the newly-formed countries into Eurovision, bloc voting has become a big part of the competition. Neighbour will vote for neighbour, regardless of anything else. You can see this in all K-pop fans when a group is nominated for a ‘mainstream’ award like the MTV EMAs. There’s the intra-fandom bloc voting, as well, with fandoms forming alliances to boost their groups MAMAs votes, among others. 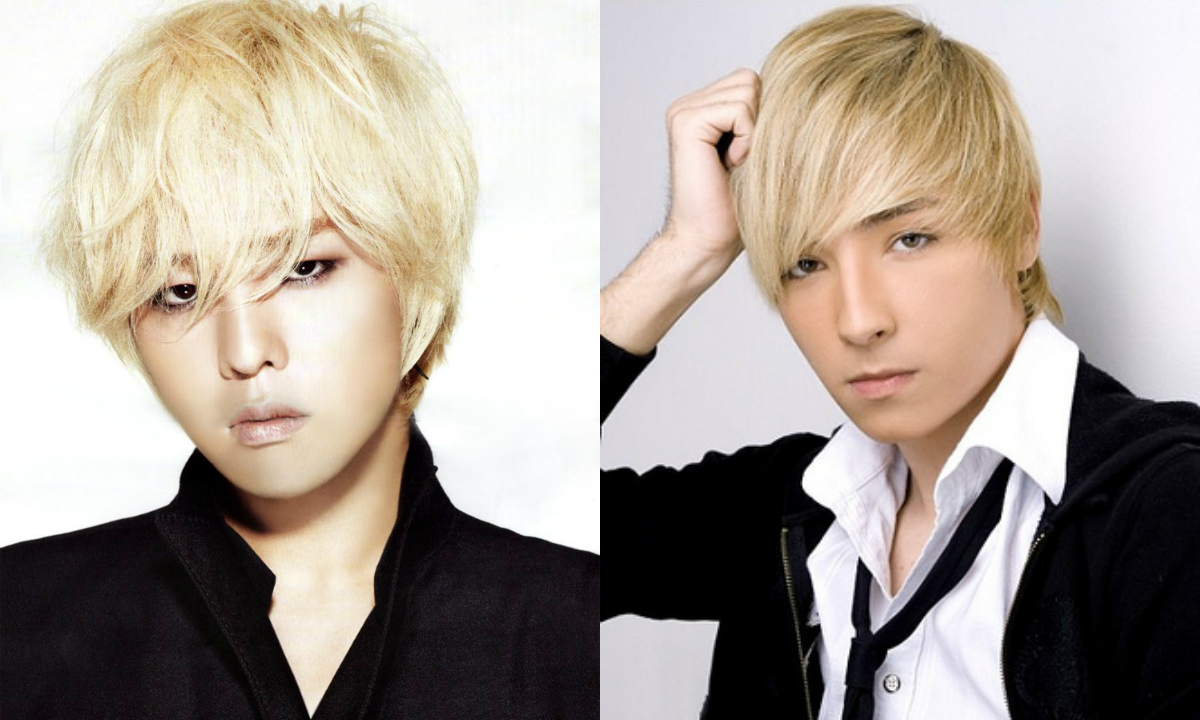 But there are times when Eurovision and K-pop become too similar. In 2010, Serbian entrant and pop star Milan Stankovic allegedly accused G-Dragon of copying his blond hairstyle (as seen in “Heartbreaker”). Now, Stankovic was definitely blond months before G-Dragon was, but last time I checked, no one owned the copyright to blond hair. It does seem like much ado about nothing, unless you like to spend your time reading passionate defences from fans of both popstars.

Apart from these similarities, though, there could be more reason for K-pop fans to take notice of Eurovision. This year, to mark the 60th anniversary of the contest, the EBU invited a non-member country to participate as a wildcard entry: Australia. With our large migrant populations and general love for the campiness of it all, Eurovision has a large cult following down under; and we have happily sent along Guy Sebastian, who is currently one of the favourites. And if the South Korean government plays its cards right, the country could just snag an invite to the 70th anniversary party.

Of course, no one has the loveable-stray-mongrel appeal of Australia that makes us so endearing to the Europeans; but are other things that can be done! First off, have a dedicated broadcaster and commentating team: people who can speak English, and at least one French speaker. Keep building up a dedicated support base in SK; and after a few years of shoulder-rubbing and networking, make a cute little VCR about how much you love Eurovision, to be shown during voting time at the 68th final. The next year, send over someone to perform as the interval act — Psy would be a recognisable name. And then, for the 70th anniversary, South Korea is officially invited as a special participant! See how easy it is?! 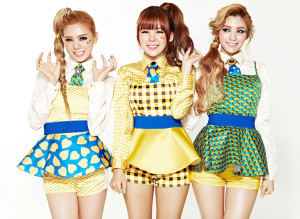 But really, that would be the easy part, because selecting a song and contestant is going to be the hard part. If an idol group is to be sent over, it unfortunately can’t be any of the big ones: no more than six people can be on stage in any Eurovision performance. Remember those Russian grannies from 2012? There were seven of them, so one babushki had to remain backstage while the others received all the glory. I don’t know how well idols or their fans would take to being stuck backstage, so best to stick with six or less.

But this would be a great opportunity for K-pop: if a girl group is chosen, their short shorts/hotpants could start a trend in Eurovision, which still prefers tiny dresses when it comes to showing some leg. The ladies can also show Europe how a good hook move is done. If a boy band is sent over, then more intense choreography would be the order of the day. Throw in some body rolls, a few pelvic thrusts and face rubbing and you could have a competition favourite on your hands. In return, Eurovision can show K-pop just how awesome the fan machine is, and how ubiquitous it needs to be.

This is all just my imagination running wild, of course, but I do genuinely believe that K-pop and Eurovision work together very well. Both are connosieurs of kitsch, knowing just how to create mass appeal with what some may call gaudiness. It’s deliciously and unashamedly low-brow, just how it should be. And when there is a chance for a double-helping of such from both K-pop and Eurovision, why wouldn’t you take it?

The 2015 Eurovision Song Contest Final airs today at 3PM EST; you can watch it here.