27: Another Defining Moment for Sunggyu 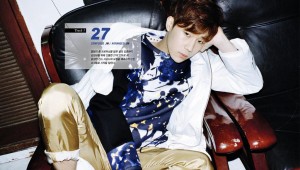 Earlier in the year, Sunggyu made a joke that caught the attention of a lot of people. He offhandedly said that he’d leave his company, Woollim Entertainment, if he wasn’t afforded another solo album opportunity.

It has been about 3 years since Another Me (which was a gem of a mini album). During the interim, Sunggyu has been busy with his group activities in Infinite as well as his variety show roles. Luckily it seems he found time to record solo material and has finally made a comeback releasing his second mini album, 27.

27 is very much where Sunggyu flourishes in terms of musicality and lyrics. Woollim reported that the album is simple, realistic, and represents Sunggyu’s “27-year-old life.” Every track was carefully worked on by Kim Jong-wan and that influence is a florid one. Jong-wan’s participation is like the impressionistic brush strokes, rich with style — painting a sophisticated picture through each song in the album.

The introduction to 27 is aptly titled “27.” Compared with the introduction to Another Me which was a lush acoustic piano number, “27” takes on an industrial touch. The steel-like percussion preempts the rush of synths. More layers continue to build a wall of sound. Sunggyu’s adlibs echo in, and the chorus of sounds loops for a bit before cutting out. It is definitely a fitting lead in for what is to come.

“The Answer” is the first of two title tracks from the mini-album. It is a hybrid rock/pop ballad and patiently constructs a wall of music at the climax of the song’s arrangement. The string instruments, which in some songs can be all too maudlin, are wonderfully utilized here. They add a solid succession of notes that sharply accentuate the emotion at the end of the song when Sunggyu draws out long ad libs of “I want you back.” The strings are faintly present during the first chorus but they move to the forefront of the musical composition when all the components come together — leading the charge with string and bow in hand. This all alludes to the desperation behind the lyrics. Sunggyu believes in his heart that this is the one person for him and is determined to get them back.

After the corral of sounds at the finish of “The Answer,” “Alive” dials back the components and lulls the listener into a different space. An echo effect gives off a sensation of teleporting into a very intimate space. The song undergoes several stylistic shifts, and these give a nod to the sentiment expressed in the lyrics. Sunggyu sings:

“I can’t take a single step away.

The entire city is filled with you.

Everywhere I go, I’m haunted by traces of you.”

“Alive” initially takes a minimalistic approach with the piano driving the first half of the song. A beat leads in the second half, and the elements start coming together to encompass a fuller sound during the second chorus. After the hook, another shift occurs as the composition strips down again to piano but this time the vocals are distorted; despite that, sheer emotion seems to emit from his lines like a struggle to find his voice amidst the control of the production. Things rejoin in a crescendo for the final chorus like lax puppets becoming animate, with the strings drawing taut for one last hurrah. Each production note is like the inescapable tether Sunggyu has towards this person. While he wants to empty himself of all these feelings, there are these traces (and subsequent production shifts) which remain in his being.

Next up is the second title track on the mini-album, “Kontrol.” Perhaps the most pop sounding number on the mini, “Kontrol” is gorgeous in its melody. The chorus ups the tempo to resounding heights drawing in the listener to rock along and sing along to the “Come back to me” amidst the electronic hook. The lyrical themes of the mini album continue here as longing and separation both meet in a song where Sunggyu expresses that he won’t question any past slights as long as he can have the one he loves. 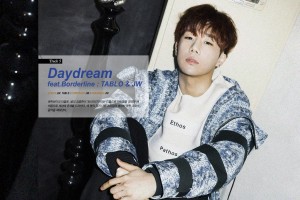 “Daydream” which features Borderline (comprising Tablo & Jong-wan) has a looped piano section as one of the underlying facets. The song is quite a complex listen and indulges in a type of fantasy that exists in the longed for closeness that lies in the distance between two lovers.

There are electronic elements and percussive beats integrated and plethora of subtle embellishments in the production. The singing also goes through vocalizing effects at times. The vocal tuning makes the voices sound like an electronic transmission — a message that expresses wishes but has a distance reflected in the vocal distortion. It inhabits a tranquil space with the looped piano refrain but doesn’t have the full warmth of intimacy.

This is also the first song to feature another artist on it. Tablo’s rap shifts the soundscape around the piano melody and Jong-wan’s processed vocals gives nods towards the beginning and ending as the journey comes full circle with the minimalistic looped piano. “Daydream” has a haze of nostalgia that tugs at the desire to reconnect with someone, but the stark reality leaves an overwhelming sense of unfulfilled yearning.

“Reply” features the K-pop Star contestant Park Yoon-ha in it. It also features the most stripped down composition of the bunch. “Reply” relies on the acoustic guitar and some snappy percussion occasionally peppering certain sections of the track. The song is a refreshing end to a mini album that has leaned on a more serious tone and that consisted of complex productions. The duet is simply sweet in its restrained nature. The tonality of both Sunggyu and Park Yoon-ha’s voices are what stand out. The lyrics feel self-reflective especially when considering the theme of the four songs preceding it. Park Yoon-ha sings:

“Your heart that cherishes me

Your heart that thinks about me

Is enough for me.”

“Reply” is a response to all of those insecurities and unreciprocated feelings. Instead of just a shout into the void, this time his vocal insecurities elicits a positive response and validation — quelling the uneasiness. There is finally a feeling of reassurance and calm that settles in as the album winds down.

27 is a beautiful mini album. If anything, it represents why Sunggyu should continue striving to follow his artistic inclinations. While his work with Infinite is great and he is very much an integral part of the group’s sound, these opportunities to revel in his artistic side — whether it be in singing tunes that he is more passionate about or whether it lie in his collaborative efforts with Kim Jong-wan, someone he has vocally idolized — has led to his most confident and passionate works. He digs deep and is able to connect on each individual piece of this album. 27 is a mature follow up to Another Me, and it continues to see Sunggyu find more expressive avenues to define himself.