Welcome to yet another month’s Worst of K-pop Fashion, where we call into question some of the more unflattering outfits in K-pop. The month of February saw a number of great debuts and comebacks, but on the not-so-bright side, there were a fair amount of debatable fashion choices as well.

Amber’s “Shake That Brass” is a fun song with an equally bright concept. Although her outfits this promotion cycle on their own are not personally to my taste, Amber manages to pull most of them off, especially when on a stage complemented by a flashy, colorful backdrop.

Wendy, on the other hand — who featured during Amber’s first week of promotions — did well performance-wise but fell behind in fashion with some slightly more unfortunate stlying choices. The Red Velvet member, while definitely pretty, could do without the bangs, and although fans are speculating that it may be a wig, it was a bad choice either way on her stylist’s part. In addition, I can’t decide which outfit looks more unflattering between her pink top and skirt spotted with printed images (shown above), or her colorfully decorated jacket with a shiny skirt. To top it all off (literally), her cap is also an unnecessary addition. 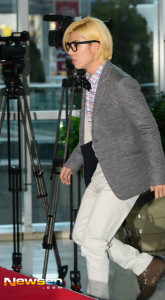 The next photo was taken at a “Hair Loss Treatment Minoxil-S and Kangnam’s Stress Reliever” event. I hope Kangnam wasn’t trying to go for a serious look at the time, because while his blazer and bow tie give the impression of a more formal-looking outfit that impression is quickly undermined by the casual plaid shirt and the plain trousers. In addition to the mismatch vibe, his thick, black-rimmed glasses give his appearance an overall comical feeling.

However, given that it was a mostly informal event held for fans, there was really no need to be dressed in a particularly sophisticated manner. However, I will say that his recent hairstyle could use some improvement – he looked better in a darker shade of blond.

Myname returned in February with “Too Very So Much,” and the song in itself is quite a unique and catchy listen. Similar to Amber’s “Shake That Brass,” the group is clearly going for the “fun” concept with this comeback — shown in both their music video and their seemingly random fashion choices. Most of the time, this style works well with their song and style, but occasionally, it does comes off as excessive.

Take the music video for example – some of the members with the more detailed patterns on their clothing barely stood out against the busy background set. On that same note, the excessive detail came off as distracting at times, especially when all five members were wearing heavily adorned outfits at the same time. It isn’t so much the unusual matching of clothing items that puts Myname on this list – it’s when their costumes become “too very so much.” 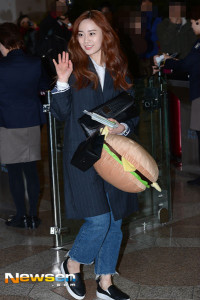 As much as I love Youngji, the airport fashion she was photographed in as Kara was leaving for Japan is not one of the smartest I’ve seen.

An oversized, robe-like coat matched with jeans frayed at the bottom isn’t exactly the definition of stylish, and she clearly didn’t bother too much with the outfit either given the way she rolled up her long sleeves to make them more close-fitting, and how there’s a weird bit of ankle showing between the bottom of her pants and her shoes. However, I do give her props for caring less about airport fashion and more about feeling comfortable (that pillow certainly does look comfy), and at the end of the day, the highlight of these photos is her cheery expression.

Readers, are there any fashion faux-pas you’d like to add?