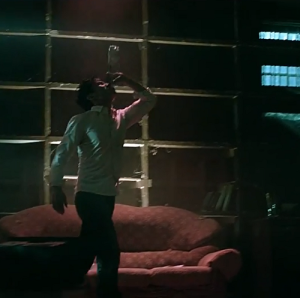 MC Sniper is a prolific rapper who started in the underground in 1998. He released his first album in 2002 and has been a force within the K-hip-hop scene since then. His latest album Shakespeare in Love contains both the titular songs “part 1” and “part 2.” The title song “Shakespeare in Love Part. 1” samples gospel singer Kirk Franklin’s “Don’t Cry,” and the accompanying MV is a piece of art.

“Shakespeare in Love Part. 1” is a gorgeous rap ballad that features Kim Shin-eui from the band Monni. MC Sniper’s rapping is very emotional — He starts off with little couplets in his first verse leading up to intense imagery describing the effects a breakup is having on him. Kirk Franklin’s “Don’t Cry” instrumental serves as the melody running throughout the track before the gospel choir kicks in at the end, further adding dramatic embellishment to the song.

The MV is dripping with symbolism and foreshadowing. The title itself possibly alludes to the movie Shakespeare in Love, but I personally feel like it may be referring to the Shakespearean tragedy. Yoo Oh-sung plays the protagonist in the MV. His character is physically and mentally undergoing great duress, and based off the lyrics it is likely because of a recent break up.

Some particularly powerful scenes which evoke an emotional response coincide with the following lyrics:

“This break-up is like insects sucking on to my body,

Biting me, laying eggs on me, please get it off.” 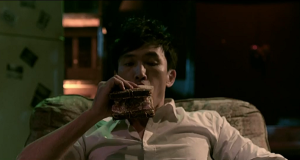 In one of these scenes, Yoo Oh-sung grabs a sandwich that is infested with maggots, but seems oblivious to the creatures even when they are literally writhing and squirming onto his fingers. He takes a bite without realizing they are there, symbolizing that he is a defeated man simply going through the motions of life without care. As he slumps onto a sofa chair, the camera crawls towards him; quick successive shots follow showing how overrun the sandwich is by maggots. A last closeup pans to his eyes noticing his mistake after he bites down into the infected food.

This scene is a physical representation of that lyric line showing how in his distraught state, things have gone into a state of disarray. As if he is not already sick to his stomach from the separation from his lover, there is a subtle fear that underlies the meaning of the maggots. The bugs are like the relationship, lingering and crawling along his fingertips. Even as he wants to get away, they are innocuously hidden and agitate him when he least expects it.

Throughout the MV, his self-destructive behavior continues with his character constantly drinking and exacerbating the shabby condition of his living quarters. Everything is layered in dust and he continuously chucks items around with a reckless attitude. Eventually, after pushing his typewriter off a table, he envisions the maggots crawling along his arms — a hallucinatory reminder of the lingering effects of his inescapable grief.

There is a slight shimmer of hope that he will be able to get away from his state of mind as he processes a photo in a darkroom. He is laughing, but soon it becomes apparent that is a pained laughter. After pouring his drink over wilted roses, he sets them ablaze and then uses that fire to burn his photo. Perhaps is was a photo of his past lover, giving him momentary joy, only to then remind him of his pain. 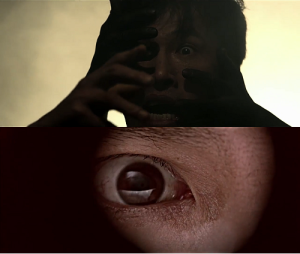 The penultimate scenes are of him trying to escape this room. Seeing a shadowy figure standing at the end of the corridor causes him to turn back around. He tries to ward it off, but instead runs back in fear. After destroying the few upright structures remaining in his room, he succumbs to this shadowy figure. The hands from the figure cover him and pull him into the mist — his eyes mirror the beginning when he looks out the eye-hole of his door.

MC Sniper’s song is one filled with regret. The title directly translated equates to “Love Tragedy,” but when translated here as “Shakespeare in Love” it is equally as apt. Shakespearean tragedies reveal characters that are not perfect, and those flaws usually result in their deaths. The tragic part comes from how the resulting tragic conclusion for the main character is more than the audience believes they deserve. Our protagonist here is dealing with several vices and carelessness, but when he is taken away by the smoky shadowy figure we assume it results in his death. The last scene is open-ended with a man grabbing the note our main character was writing, only to walk away after reading it.

This song and MV are both stunning. It’s a heartfelt take on the tragedy of love lost. The metaphors within the lyrics of the song are especially striking — breathing a fresh perspective on the topic. The MV is chilling and well shot — adding intrigue to a song that is well composed. MC Sniper is a veteran who shows off his lyrical chops and it is inspiring.