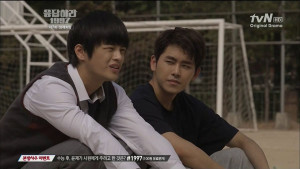 Hoya of Infinite has received plenty of praise for his acting skills in the famously popular drama Answer Me 1997. He seems to have surpassed the mediocre standard to which a lot of people hold idols-turned-actor, rising above expectations and playing his role well. Perhaps too well, it seems.

For those of you who haven’t watched the (amazingly life-changing) drama Answer Me 1997, Hoya plays the character Joon-hee, a gay high school student in love with his best friend Yoon-jae (played by the equally handsome Seo In-guk, who also rose to acting fame with this drama). He’s closeted to basically everyone, except for his other best friend Shi-won (the beautiful and talented Eunji of A Pink), to whom he comes out halfway through the drama.

Hoya’s role was that of a supporting actor (the drama focuses on Yoon-jae and Shi-won’s relationship) but nevertheless marked an important milestone in the representation of the gay community in Korean entertainment, especially on the silver screen. I identified intensely with Joon-hee’s character and his struggle with his sexuality. He struggles in a culture where his sexuality is misunderstood at best; I was a fan of an industry where I rarely see my sexual orientation represented at all, let alone such an authentic and non-judgmental representation. Joon-hee is a three dimensional character whose sexuality doesn’t define him but remains an important part of his life. And upon learning of Joon-hee’s secret, Yoon-jae isn’t disgusted or angry but treats him with the same respect and friendliness as he always did.

And so when I heard Hoya’s words on the 4 Things Show, they were at the same time surprising and expected. Surprising, because I had always thought of Hoya as proud of his first big acting role, and expected, because of the stigma that still surrounds sexual minorities.

On the February 10 episode of the 4 Things Show, Hoya and the other guests talked — quite fondly — about his role in Answer Me 1997. His acting was so good that people were asking, “Is he an idol? Or is he an actor?” Hoya himself talks about his role: “A lot of people got to know who I was through Answer Me, which was so well-known. And a lot of people thought of me as my character.”

The show played a montage of scenes from the drama, building up to the point where Joon-hee confesses to Yoon-jae and then plays it off as if it were only a joke. Hoya chuckles, too, and says that he got a lot of praise for his portrayal of Joon-hee, so he has no complaints. Yet, he does bring up how many people really thought he was gay after watching the drama.

Dongwoo, the other half of Infinite H, said that “A lot of people misunderstood.”

“Even other celebrities would ask me [if I was gay],” Hoya said. “I was shocked. At the time my trauma was really bad. I think that went on for more than a year after the drama ended.”

But what I think is important to remember is to keep his “trauma” in the context of the situation. I don’t think for an instant that Hoya is truly traumatized by playing a gay character. Where I think his shock comes from is from his sexuality repeatedly being questioned — for anyone, gay, straight or otherwise, having your sexuality constantly questioned after having explicitly said otherwise is a difficult and tiring experience. 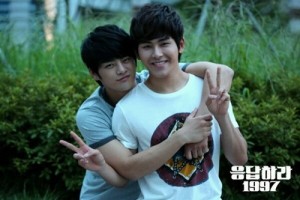 Sexual minorities (to use the term that Hoya and the other guests use on the show, one that is common in Korean to refer to LGBT persons) continue to suffer discrimination in many parts of the world, and South Korea is no exception. Three out of five Koreans believe that society should not accept homosexuality, and only a quarter support equal marriage rights. Sexual minorities continue to stay hidden and live closeted lives, and as a result there is little to no public conversation about sexual minorities.

To this day, Joon-hee remains one of the very, very few gay characters in Korean television, and certainly the most popular gay character watched by recent audiences. Lee Min-ho pretended to be gay in order to share a house with the female lead in Personal Taste, but, seeing as his character was really straight, that doesn’t really count. Lee Jong-suk probably comes the closest to Hoya, having a supporting role in Secret Garden as gay musician Tae-sun, who was also in love with the male lead.

With Answer Me being so popular in Korea, it might be the first experience many people have had with any sort of authentic portrayal of homosexuality. (And the drama was definitely record breaking, holding the top spot for six straight weeks and the finale peaking at 9.08% — the highest rating for a cable drama in Korean history.) Despite these rationales, these celebrities and other people close to Hoya have no right to harass him with their suspicions, no matter how curious and well-intentioned they might have been. The problem at the heart of Hoya’s trauma is not playing a gay character, but the insensitivity of those around him.

At the same time, a tiny part of me would have loved to see him use these questions as an opportunity to start a conversation. These questions, although intrusive, provide a stepping stone to talking about the rights and issues of sexual minorities. That being said, the constant pressure he describes is something no one should have to face, and understandably he suffered emotional hardship because of that. 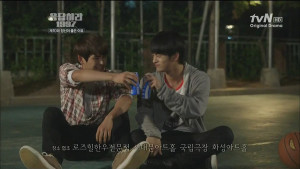 That being said, I am ever so proud of Hoya for taking on a role that so many would have lacked the confidence to play, and for playing the role so respectfully. That kind of courage, and the fact that he looks back on the acting role itself positively, shows to me that he does not regret playing a gay character. He says himself, “In my role as Joon-hee, I got a lot of love so I really have no complaints.”

Dongwoo sums it up well at the end of the segment: “It just means that Joon-hee — I mean, Hoya — is really good at acting. Good job!” If Hoya’s acting is good enough to convince people that he and his character are one and the same, then he’s doing a great job, and I’ll definitely look forward to his future as an actor and entertainer.