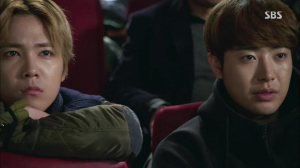 Modern Farmer started out as a light-hearted, laugh out loud comedy, but episodes 13-16 take it much further into melodrama territory. Yoon-hee (Lee Ha-nui, Pasta) becomes the focus of the show, and the main plotline now revolves around her, Min-ki (Lee Hong-ki of FT Island, You’re Beautiful), Hyuk, and Yoo-na. It’s a crazy love square (?) that still keeps you guessing about who will end up with who.

The “problem” with this tangled love line is that there are no clear-cut good people and bad people. No matter what happens, a good person is going to be left out in the cold. Yoo-na (Han Bo-reum , Dream High) proves that she is more than just a pretty face. Cooking delicious meals becomes her way of thanking her hosts. We almost forget that she’s an idol until she offers to help Yoon-hee for a singing competition. Hyuk (Park Min-woo, Roommate, Flower Boy Ramen Shop) nominates Yoon-hee to represent the village and promote their apples (another subtle attempt to show his admiration for her). Yoon-hee can sing, but she has two left feet. Her failure to learn the dance routine annoys Min-ki who constantly compares her to angelic Yoo-na. But instead of flaring up in anger, it seems like Yoon-hee has lost any will to fight back.

This new Yoon-hee is trying to accept that Min-ki does not reciprocate her feelings, whatever those are. Over the next few episodes, clueless Min-ki continues to give small sparks of hope with one hand, but then snuffs them out with the other. Yoon-hee is trapped somewhere between hope and pain, but Min-ki does not see why. She overhears Min-ki telling Yoo-na that he doesn’t feel love for her; he feels pity or sympathy for his first love. This insults Yoon-hee more than anything, and she becomes determined to cut Min-ki loose. 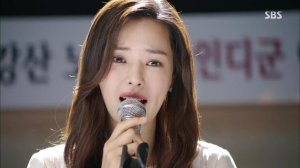 She begins by gently telling Min-ki to not be so nice to her or her son. His friendliness and attentiveness made her misunderstand his feelings, and she certainly doesn’t want her son to experience that disappointment. Her depression over giving Min-ki up is, of course, the perfect time for her estranged boyfriend to return! He shows up in the village after eight years, completely unaware that he has a son. We learn that Yoon-hee gave up going abroad and becoming a pianist to take care of her stepbrother. After their parents died, Yoon-hee made sure that he had someone to rely on. That painful memory of abandonment motivates Yoon-hee to steel herself for Min-ki’s departure.

Winter sets in, and Yoo-hee tries to bury her depression beneath the snow and a smile. But Min-ki and Hyuk sense that she’s putting on a front. Hyuk tries to comfort Yoon-hee indirectly by helping her, but only manages to stress her out more. To his credit, Min-ki confronts Yoon-hee directly about her attitude. Yoon-hee manages to reveal that she doesn’t like being pitied by him; however, she doesn’t dare confess her deeper feelings. Now it’s Min-ki’s turn to be confused about his heart; what he thought was only pity might be something more. Even Yoo-na becomes annoyed with his sudden disinterest in her.

Min-ho’s disappearance is the perfect time for Hyuk to help Yoon-hee and show that she can depend on him. This gives Yoo-na the opportunity to tell Min-ki what is obvious to everyone but himself: he likes Yoon-hee more than he realized. In typical Korean drama style, Yoon-hee’s ex-boyfriend finds out rather abruptly that he has a son. But before anything else can be said, the shocked man is dragged away. The whole 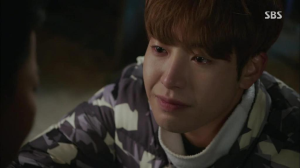 situation is enough to rip off the mask of happiness Yoon-hee tried so hard to maintain. She finds herself taking some comfort in Hyuk’s empathy and support. Little do they know that Min-ki is watching from afar. There are many questions left to be answered in the series, but the ending scene is a turning point. Both Min-ki and Yoon-hee are confronting their confusing feelings for each other at the same time. Only honesty with themselves, and each other, can solve it.

As a side note, I’m disappointed that Modern Farmer lost a lot of its unique and funny side. Most of the quirkiness that I loved at the beginning has been cut away and replaced with sad piano music and crying in barns. I knew that the characters would have to change and grow up, but it’s becoming a little too heavy on the romance theme; just about every character has some sort of love line going on. And while there are moments of creativity and originality, the later episodes are very different from the beginning ones.