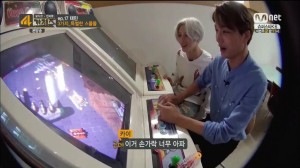 “It’s called the 4 Things Show because only rude kids appear on the show,” Jung Joon-young quips to his manager as the camera pans in to capture his manager’s teasing agreement that, yes, the show suits him.

Joon-young’s joke stems from a pronunciation of “four things” (ssagaji) which can also translate to “rude.” The intentional wordplay of Mnet’s 4 Things Show is fitting for the documentary-style program – directed by a former MCountdown PD, the show unapologetically forgoes all the traditional niceties of idol TV. Gone are the games, competition, and gags that allow idols to present glossy images to their viewers, and in their place the 4 Things Show poses a question: who is an entertainer beyond the entertainment?

4 Things Show features a “hot topic” celebrity each episode, having already hosted idols such as Jay Park, Rap Monster, Jiyeon, Younha, Junggigo, Taemin and Zico. “Rude” or not, all guests are subjected to the same show structure, beginning with reading aloud negative online comments made by anti-fans. Admittedly harsh, these comments are used to create an individualized question that the idol must answer by the end of the episode. Many of these questions deal with the concept of idol-dom, as Jay Park is asked, “Can celebrities live as they want?” and N must answer “Is an idol’s fandom their everything?” while others center around the idol’s identity as a musician, as Joonyoung is queried, “How are you a rocker?” Both the hate comments and ensuing question open an avenue for the idol to reveal their own thoughts regarding questions and perceptions the public have formed towards them. 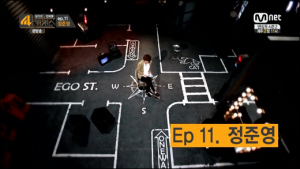 With four as the recurring theme, guests discuss four aspects of themselves that are either truth or misunderstanding. Contributing to the conversation are four separate voices: peers and group members, industry seniors, ordinary citizens, and the guest him/herself. What’s notable is the amount of control allowed to the featured guest, as they are invited to pitch their own ideas and direction for their documentary. It’s interesting to watch the different ways in which the guest capitalizes on the freedom – some idols such as N and Jiyeon choose to de-stress by visiting their high school teachers and watching movies, respectively, and others such as Zico do some soul-searching in the form of a psychological consultation complete with neurofeedback readings and art psychotherapy. More directed activities ensue for other guests, but these segments still attempt to align with the individual idol’s interests and concerns: for JB, an assignment to create a short film with his film studies classmates, and for Sunggyu, an appointment with an MBTI psychologist, as well as forced rock climbing. 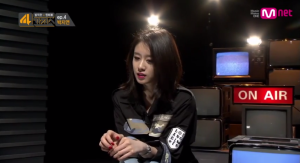 Another four-related segment involves the idol receiving simple four-syllable questions from their friends, group members, or the public, to which they must concoct an answer, also in four syllables. The short format of the question and answer segment draws out surprising honesty from the idols, who have no choice but to answer the questions head-on without the usual hemming and hawing. “I still use them,” N admits bashfully in relation to Ryeowook’s question “Do you still use whitening products?” while JB pauses before confessing, “I don’t know,” when asked if he is happy as he is now.

Perhaps the strongest point of 4 Things Show is the truthfulness from the guests. By offering the idol ownership of his or her documentary episode, the program in turn receives the trust and full disclosure of the guests. Often, the most thoughtful and unfiltered comments come as the idols contemplate their identity and grapple with their obligations as a public figure. “In this world, the most two-faced person must be me,” Rap Monster says, and Zico speaks similarly:

What I gain is honor, money, love, achievement. What I lose is time with my family, friends, freedom, and my own self. I feel like…I’ve been losing myself slowly, too. What I’m saying is, is it really my own self turning into “Zico,” or have I left myself and am living as another person? Because compared to the times I’ve faced myself in the mirror, I spend more time facing a camera.

It isn’t entertainment for the humor (though comedic moments abound), but rather the 4 Things Show serves as an important reminder that those whose careers cater to the public’s enjoyment are much more than stage names and pretty faces, and that they too are people with personalities and no definite answers themselves. “But I’m a human,” Joon-young shrugs as he concludes his episode, and it’s enough.

4 Things Show is currently confirmed for a second season, having already aired the first episode this January featuring Shinee‘s Jonghyun. Sunggyu and Zico are also reported to make a reappearance; which entertainer would you like to see in the second series of Four Things Show?