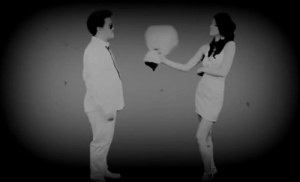 Defconn started as an underground rapper notable for his witty material. He then went from underground to critically-acclaimed comedic songwriter and performer, and then in 2012 he paired up with entertainer Jung Hyung-don to form the group Hyungdon and Daejun.

In addition to their musical partnership, nowadays the duo is probably better known for their hosting gig for the popular segment, Weekly Idol. Defconn’s other variety show participation has made him a staple and sought after comedian. Recently, however, Defconn has returned to his roots and made a return to the music scene. He is releasing the Defconn miniproject volume 1 entitled Mr. Music. The title track off of this project is titled “Love Racing.”

“Love Racing” takes on a very speedy percussion beat. The fastest BPM (beats per minute) is up to 150 at one point in the track. With such a fast rhythm, the song would seem ideal for dancing, but Defconn stated that he wanted a sadder undertone to the song. Hence, the lyrics portray a story that results in an unfortunate conclusion for the narrator. Defconn raps about losing a girl and questions what makes her new love interest better for than him. The chorus echoes his failed attempts at wooing her back, as Park Sang-min sings:

A text at dawn – challenge failed.

His words reveal that he’s done and said everything that he can think of to get her back. Ultimately, he can only look up to the sky – symbolizing the rest is left up to powers beyond him.

The MV is great companion piece for Defconn. It mixes in a variety of shots edited together in collage-like patterns. The MV first starts off introducing all the featured artist on his upcoming project album, and then commences to the title song about 45 seconds into the video. The collage style and constantly moving camera works well for this high BPM track because there is always action on screen. From colored lines that cut through the different images to Park Sang-min who features on the track, the video has a lot going on. 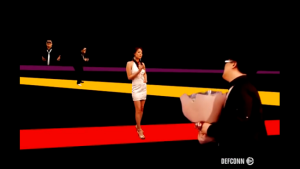 What is cool about the different intersecting lines of action is that there is still a small story interspersed within it that mirrors the lyrics. Defconn is trying to get back this girl and expresses his affection and efforts to her. She is seen at times in the MV rejecting him and the collage style works to put that distance between the two.

There are perspective shots where the collage plays a significant role in bringing to the forefront the physical demarcated space between the two. There is a shot where Defconn is in the background and foreground while the female actress in the middle of the screen.The lines separating them and the actual amount of black space between the Defconns and the girl makes her appear unreachable. Defconn pleads with a bouquet of flowers but the woman just shakes her head rejecting his advances. The MV does a great job with these editing effects interpreting their relationship to one another.

The other prominent relationship building scenes are the black and white scenes between the two. At first these scenes appear to be glamorous call backs to their prior relationship. The first black and white scene shows them kissing. The cinema effect hints that it is a part of their past. There is a small expectation of this effect continuing to illustrate their affectionate past. However, during the DJ turntable breakdown, this expectation gets flipped on its head. Defconn hands a bouquet of flowers to the woman and as she receives it, the musical notes of the scratches are heard from the turntable, leading her to rewind and hand it back to him. The scene plays along to the back and forth scratching of the turntable exaggerating his attempts at reconciling their relationship until finally she tosses the bouquet away.

“Love Racing” is a great title track from the MC. Defconn is deft at rapping, and the story being told on screen utilizes smart editing choices. The action is compelling as the camera movements keep the viewer interested in the patterns and shapes created from the collage of images. Defconn wanted the song to have a tint of sadness, and I think it succeeds in reaching his goal. The song has a fast beat, an undertone of disappointment, and the MV is a great companion to the song.