Run, Brother: Can the Success of Running Man Be Replicated? 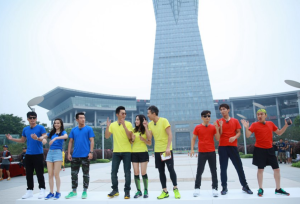 When a Chinese remake of the popular Korean variety Running Man was first proposed, the majority of fans disapproved of the idea. Despite criticisms, producers ended up going through with the plan, launching the program (tentatively translated to)  Run, Brother in early October.

Built on the success of the original, the show has been gaining much attention in China. With the guesting of the full Running Man cast on the Chinese show in the most recent episode, it is inevitable that comparisons may be drawn between the two programs. Indeed, is the original always the best, or can it be surpassed?

The production team of Run, Brother worked with that of Running Man in preparing for the show. Therefore, the former has a large advantage from the start as they can base their games on the results of the experimentation with the Korean show. To give some examples, games selected have included the highly successful (and consequently highly reused) acupuncture mats, flying chairs and boat-making from Running Man. While it may have been interesting for the format of the earlier episodes of Run, Brother to be a throwback to the first concept of Running Man — locking the cast in a venue and having them play games inside — it is understandable that the Chinese remake follows the success formula of the Korean version’s recent episodes.

One aspect of the games in which Run, Brother is doing better than Running Man in is definitely the name-tag ripping segment, which is what defines the program. I am uncertain why these games are so rare now in the Korean show, but it appears that the producers are attempting to move away from the show’s original concept. Even when it is included, it is hardly an all-out competition; there is significantly less action with members in hiding being almost certainly eliminated upon discovery without much of a fight (a prime example being the episode on which Shin Min-ah and Jo Jung-suk guested). 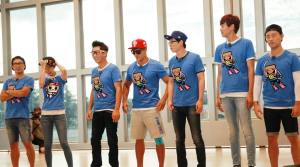 However, in the Chinese version, name-tag ripping has appeared in practically every episode, and whether it be as a result of the editing or the competitiveness of members and guests, the games are intense. This was particularly prominent in the most recent episode when Running Man was invited, as with two capable teams pitted against each other, the tensions were running high. The competition that ensued involved much head-on fighting and ripped clothing — something I haven’t seen in a while on Running Man — and was consequently quite refreshing.

Granted, like how some Running Man episodes suffer from obvious scripting, I question the extent to which the staff of the Run, Brother team influenced the unfolding of the action. The Running Man team had an obvious advantage after the first few eliminations, and close to the end, when only the four strongest players — Kim Jong-kook, Yoo Jae-suk, Gary and Song Ji-hyo — remained, the 1-on-1 matches that followed can be seen as a solution to the unbalance in strength between the two teams.

Furthermore, the cast is the core of any variety show — it is one of the determining factors in whether the show hits it big. When Running Man began only a handful of its cast members were variety veterans; however, as characters and relationships were established and evolved, every member was able to adopt a unique role in entertaining the viewers, whether it be through their speech (case in point: Gary’s cheesy remarks) or body gags (most notably Lee Kwang-soo). Although these roles have become predictable to a certain extent, they are also what the viewers have come to expect and look forward to. On the other hand, none of the members of Run, Brother are professional comedians or MCs, even though some have been very active on varieties in China. They are doing well in building chemistry and adapting to the show. However, when placed side-by-side with the Korean cast, they pale slightly in comparison. 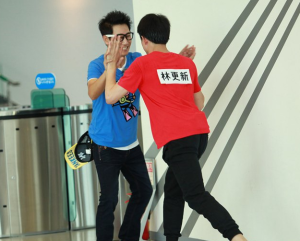 Despite the fact that both sides were equally competitive during the name-tag ripping game, the Run, Brother team was more focused on victory. The Running Man team put just as much effort into the battle but didn’t forget to create laughs along the way.

We see this in the way Lee Kwang-soo abandoned the competition in the presence of Angelababy, the sole female member of the Chinese cast, playing the mesmerised character that emerges amongst the male Running Man members whenever an actress or a girl group idol held at a high level of regard guests on the show. Ji Suk-jin showed his weak but ambitious persona by initiating a 1-on-1 match with Lin Geng Xin, a guest on the team of the Chinese cast in that episode. The match ended up lasting for six rounds while Yoo Jae-suk was constantly commenting on the sidelines about how much he wanted to rip one of their name-tags to end it. Haha also sparked a random dance battle before going head to head with Deng Chao.

What did impress me with the Run, Brother cast was their ability to play along with the Running Man members’ gags, despite being weaker in the variety department. Angelababy began charming Lee Kwang-soo once she realised she could be a distraction and even performed the infamous “of course” moment between Kim Jong-kook and Yoon Eun-hye on him. Lin Geng Xin proved to be a fairly suitable opponent for Ji Suk-jin — they were equally ineffective in their attacks and seemed to be legitimately tired after each round. Deng Chao threw himself actively into the dance battle with Haha, even busting some impressive moves to rival Haha’s. 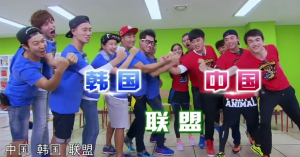 Overall, Run, Brother is off to a promising start. The games may have been highly successful because they were developed based on the responses to the Korean version, but Running Man’s current direction away from the action concept is admittedly causing it to fall behind. On the other hand, the charm of the Korean cast — their talent and their chemistry — is something that cannot be reproduced and a key factor behind what makes the show so highly successful. Although Run, Brother still has a long way to go before it can be considered on par with Running Man, I hope that the format and cast can grow to develop their own unique style rather than continue to follow in the exact footsteps of the original.