K-pop Throwback: MBLAQ's Turn for the Artistic with "Mona Lisa" 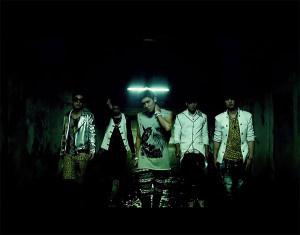 In the wake of MBLAQ’s five-year anniversary, and more apropos of current events, the revelation that members Lee Joon and Thunder won’t be renewing their contracts (Joon to pursue his burgeoning acting career, and Thunder to try his hand as a full-time solo artist/producer), it seemed pertinent to take a look back at one of their more iconic songs: 2011’s “Mona Lisa.” Okay, iconic may be a bit overdramatic, but the song certainly made an impression on this writer. It was, in fact, the second song I heard from the group — the first being “It’s War,” and the subsequent MV kind of blowing my mind a little bit. That being said, the music video for “Mona Lisa” isn’t exactly what gives the song its unexpectedly impressive color.

As far as music videos go, “Mona Lisa” is a fairly simple affair. There isn’t anything particularly outstanding about it, that is to say nothing that separates it from most music videos in K-pop. It’s an unrequited love story starring all five members of MBLAQ and the mysterious, proverbial “Woman in Red.” She walks past each member, allowing them a glimpse of her sensuality, a bit of her scent lingering with each member as she saunters by, the repeated cadence “Baby, say yes” following her. There’s something tragically romantic about the “Mystery Seductress” trope, but as far as an MV treatment, it’s neither interesting nor original.

Be that as it may, there are several elements of the music video that did catch my attention. The choreography, a facet of the group that always impresses, was quite fantastic. The intricacies of the choreography may go unnoticed if a viewer was simply concentrating on the precision each member shows while executing it. The music has elements of tango interspersed with standard beat-heavy pop. The shade of the music almost demands that the choreography speak to its heavy Latin influence. The choreographer managed that with subtly and cleverness. It could’ve very well been a bit over-the-top, cheapening the cultural and technical validity of the music itself. However, the arm sweeps and steps indicative of a tango were fused perfectly with the intricate K-pop choreography. 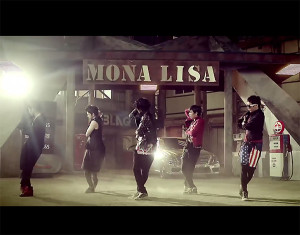 The sets and locations for this music video are also worth mentioning. The imagery of being stranded in an abandoned gas station (complete with the song’s title as the station’s name) is a bit on the cheesy side (considering our sexy Mona Lisa strolls into this dusty, old fueling station in her red dress and heels). However, the texture and coloring are beautiful — as much as dust and rust can be considered “beautiful.” We also get shots of our men on the roof of some ubiquitous building while the camera sweeps and circles them executing more choreography. Again, nothing to write home about, but the landscape is gorgeous — shots of the horizon at sunset, buildings etching the soft hues of the sky with their sharp angles.

The coloring is noteworthy as is the use of architecture acting as a contrast to the natural texture of the environs. It’s unfortunate the director made such poor use of the beautiful locales and coloring. There was so much potential to make a video that utilized the surroundings and wove a story around the interaction between the environments and MV’s protagonists. Regrettably, all we get is the boys brooding in different parts of the sets and our leading lady walking and giving the camera a bit of face. 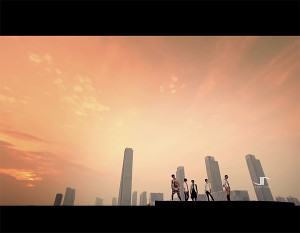 With that in mind, however, the focal point of “Mona Lisa” isn’t at all the music video. The video’s only goal is to promote and sell, nothing more or less. As a promotional tool, it’s a bit underwhelming. But the song itself is quite beautiful. The Mona Lisa EP was in and of itself a concept piece with each member choosing a piece of Western pop culture iconography (Zorro, The Beatles, Boy George, etc.) for the cover. Each song had a flavor that was both dramatic and elegant. Title track “Mona Lisa” is no exception. The tango-infused pop song is brilliantly constructed to couch the range and depth of the group’s vocals.

Though I’ll never be convinced a rap is necessary in every song (nor a rapper in every group), that doesn’t detract from the vocal execution of each member. The use of the boys’ higher registers during the quiet guitar-focused moments of the song were impeccable, and the stronger thrushes of the song complimented their well-rounded sound.

So for all its beauty in terms of environment and color, the music video is something of a letdown. However, the song itself deserves a spot in the annals of K-pop classics as a piece of music that was brilliantly conceived and executed.