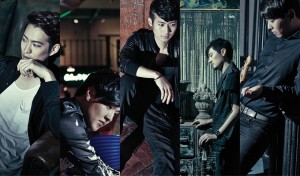 Hello everyone, and welcome back to another edition of Seoulbeats’ Korean Indie Gem, where we highlight standout musicians from K-pop’s sister scene. Up this week is CoreMagaZinE (in Korean: 코어매거진), a Seoul-based, synth-rock band. The group consists of Jung-hun (guitar, producer), Dong-hoon (bass), Ki-won (drums), In-hak (vocals), and Min-kyu (keyboard).

There is something to be said about the straightforwardness in a band’s sound, and CoreMagaZinE delivers just what they promise: synth-rock. That isn’t to say that there isn’t depth and maturity in their sound and composition — they have those qualities in spades — but rather that they’re a perfect example of how commitment to a particular sound can actually give more variety to a group’s music. Throughout their career and up to this point, they’ve kept to growing their particular brand of synth and rock, which has resulted in a beautiful album, Rude Banquet, this past summer.

In 2012, CoreMagaZinE released their first EP, Peep, which was full of youthful energy and upbeat synth songs. Then, the band took advantage of the benefits of a “re-release,” by re-releasing Peep in 2013 with expanded songs and tighter mixing. Though re-releases sometimes run the risk of sounding repetitive, CoreMagaZinE avoided this foible by truly remixing their songs, improving sound quality, and adding in different versions of what they had produced before. It was a great way to demonstrate growth and give something new to fans, without the pressure of putting out a new album in too short a time.

From Peep, the track “Regret” shows what the band is all about. The song is part-Britpop, part-80s rock, but it still manages to sound fresh. They don’t just play with synth; it is a key element to their sound, and rarely is there a moment that the instrumentation is without accompanying electronic trills. The track is dancey, but with depth, and avoids the sometimes-too-light quality of other synth-rock songs.

“Regret” and Peep comprised a fun, strong debut for the band, but the EP’s brevity and singular sound focus left fans wanting more. Luckily, in July of this year, CoreMagaZinE released their first full album, Rude Banquet. If Peep was the appetizer, Rude Banquet is definitely the main course, with possibly a bit of dessert as well. With 11 new tracks, the album shows maturity, more subtlety, and a more varied use of the synthesizer. (It should also be noted that Rude Banquet starts In-hak’s tenure as their new vocalist.)

The video above features two songs from Rude Banquet, with the first one being title track “Fountain.” Right away, one can hear the difference between this album and their last. It has dynamic progression, with kicked up intensity and instrumentation as the verse moves into the chorus. It then drops into an unexpected, distorted guitar solo. It’s much lighter than their previous work, but the close relationship that the synth keeps with the guitar, grounds their sound. The next song “그래서 하는 말” slows things down and sounds a bit more classic rock, without as much synth driving the piece, but it manages to retain the electronics to add a fuller background. Perhaps more striking are In-hak’s vocals. The performance also shows how well the instrumentation centers on them.

Other songs from the album harken back to Peep more explicitly — like “달리” or “Bittersweet Rock and Roll” — though now the upbeat, synth-driven songs add variety against CoreMagaZinE’s growing soundscape.

A good example of this soundscape, and a personal favorite off the album, is the second track, “Shiva,” which brings all of the band’s key pieces — rock, pop, synth, and careful mixing — to produce a thoughtful song that takes its time to expand and grow in attention-grabbing directions. Not one part overwhelms — at points the guitar is the focus, other times the vocals take center stage, and then at yet other points, some really interesting atmospheric sounds layer to create music of their own.

There are probably a number of bands that CoreMagaZinE could remind one of, but they cannot be recognized as total inspirations. With CoreMagaZine, there’s always something special lurking in their music; whether it be a clever mixing technique or layering of moods, there’s an extra bit in there that forecloses the idea that they’re just a synth-rock group. And yet, on the other hand, that’s exactly what they are.