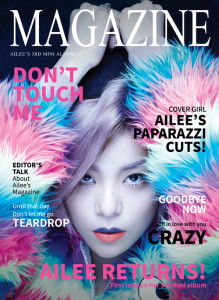 Earlier this year, Ailee threw in a change of pace in the form of “Singing Got Better.” With this slower tempo digital single, Ailee was able to unleash a powerhouse vocal performance. Since then, she has participated in a few collaborations with 2LSON and Eric Benet. Finally, the singer has given her fans a nice EP of songs with her latest release Magazine. The press for this mini-album initially focused on the weight that Ailee lost, but they have also mentioned that there is more experimentation with a variety of genres. The album’s ambition does not quite venture as far as these stories claim, but for fans of the singer, it does not disappoint.

The first song off her EP is the title track “Don’t Touch Me.” Unlike “Singing Got Better,” Ailee returns to her saucier self in this breakup track in which Ailee tells her cheating significant other to get out. Unsurprisingly, this is composed by long time producer Kim Do-hoon, who also composed “I Will Show You” and “U&I.” Touted as a Britpop, it does bear a hint of similarity to Adele’s “Rolling in the Deep.” The driving beat and scorned theme are probably the only real ties to the aforementioned. Otherwise, Ailee generates her distinctive fire and vocal runs to “Don’t Touch Me.” Ailee once again hones in with her typical perfect execution. However, I would actually like to hear her try something more unique and perhaps sing with more vocal breaks. Like the other Kim Do-hoon produced tracks, Ailee is pitch perfect here, but if the idea was to experiment with something different, then you would be hard pressed to find much change from her previous title tracks.

Next, Ailee partners up with Dynamic Duo on “Crazy.” It is a hip-hop and R&B flavored song that feels similar to other collaborations Ailee has done before. Dynamic Duo takes up the verses with a rap about being imperfect and feeling insecure in a relationship. This surely could have been a song where Dynamic Duo featured Ailee instead because of how much of the song the pair raps over. I will give it a pass this time though because of how well both they and Ailee work together. Ailee’s vocals are layered to give the track a throwback vibe. With the addition of some horns in the last verse (is that a trumpet solo I hear?), this breezy jam has enough flourishes to make it more memorable compared to Ailee’s other hip-hop/R&B songs.

The slowest track off the mini-album has got be “Goodbye Now.” It is an OST sounding ballad and something that Ailee is probably quite familiar singing. There is a rousing emotion-tinged chorus, and the lyrics are about letting someone go. The lyrics do follow a gradual progression with the refrain of calling the significant other, reflecting her unwillingness to fully relinquish her ties with that relationship. By the end, this is broken as Ailee says:

Even though we once again see Ailee navigate through familiar ground with “Goodbye Now,” she does sound nice. I am sure this would make a great companion to a sad romantic drama, but I would have preferred in its place a song that was less conventional.

Luckily, the next track “Sudden Illness” brings in some of this genre experimentation that I’ve been hearing about. It starts off with a slow guitar riff that loops in and out of the song during the verses. In fact, there is a bunch of instrumentation that comes into play here with pianos, strings and drums bringing out a rock flavor to the track. Melodically, it runs parallel to a typical pop ballad, but some key instrumental shifts keep the song intriguing throughout. Lyrically, Ailee likens the after effects of a failed relationship to a sudden illness. The comparison is certainly different, and the fact that Ailee continually reassures herself that she will be okay is another refreshing element to “Sudden Illness.”

“Teardrop” starts off with sirens and a piano melody. Then, it adds the bass and synths for a quicker tempo and more dramatic flair. I actually quite like this final song to the album. It is distinguishable from other pop tracks because of the structure. It has a full break mid-track that adds to and accentuates Ailee’s vocals. Despite the over-processed layering of Ailee’s vocals during the choruses, the break works in the singer’s favor by allowing her voice to emote without the added embellishments. In “Teardrop,” Ailee expresses how it has been raining since her breakup. It has pretty much been a water show since the split, but by the end of the song, Ailee states that she will “erase you from my tears starting from this moment.” It isn’t quite a dazzling moment of lyricism but is poignant nonetheless. The song could have been another predictable pop number, but the mid-song breakdown and spot-on vocals make this a fantastic closer to the EP.

There is a lot to like about Magazine. As a whole, it works as a package of five catchy tunes. Ailee’s voice is on point as usual. There was supposedly more variety of genres on this mini-album, but the pop and R&B flairs in Ailee’s vocal runs make the tracks feel more familiar than experimental. When Ailee does break from the formula, those stellar moments work incredibly in the singer’s favor. Hopefully she will take note of this in her future releases. Until then, this mini-album gets a 4/5 from me. Overall, this is a solid release from Ailee, but there is always plenty of room for improvement, which is scary because of how darn talented she has already proven to be up to this point.