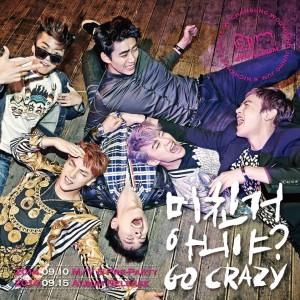 2PM sparks feelings of love-hate within me. Some of their songs are good, while others make me want to mute the radio whenever they come on. Since “Hands Up,” 2PM has released rather lackluster tracks, in my opinion. Thus, the teasers for their newest single “Go Crazy” that were released created some apprehension since this was going to be another dance track.

If you want something to make you laugh, then “Go Crazy” succeeds on all counts as it’s actually enjoyable. Initially, I was too busy laughing at everything to really pay attention to the actual quality of the song and MV. However, after a few more listens and watches, being apprehensive was a correct gut feeling.

Whether or not you like the MV depends on how you look at the craziness: so silly and out there that it’s fun, or funny but the nonsense kills the good. The MV seems to be the latter and that is where the pleasure ends sadly. The MV has the basis for being simply fun but goes a bit too far and ends up just being relatively stupid and nonsensical.

First, let’s talk about the hair. Yes, this is a bit trivial to ridicule, but it’s hard to ignore. Poor Jun.K, Nichkhun, and Wooyoung: it looks like someone really ticked off their stylists. Jun.K’s carrot top is pretty atrocious. It’s not a good shade of red, but rather, more along the lines of burnt traffic cone orange. Nichkhun’s hair looks like the stylist got a bit carried away with gel and allowed a cow to lick the man’s hair. And Wooyoung’s hair was no doubt inspired by weed-whacked grass crossed with a mullet. Those three also got the short end of the stick outfit-wise. Wooyoung is channeling Hyun Bin’s Secret Garden character with that track suit.

Then, we have the strange special effects. When the MV starts, it seems like the scenes are relatively normal, which is good. Box sets are usually annoying, but I was willing to let it pass if that meant fun dance scenes. But the music video takes a turn toward the 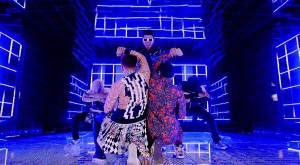 Who knew that riding on invisible motorcycles gives you the power of the Juggernaut or Hulk smash? The boys suddenly develop the skills to burst through glass and walls on their way to the next hotspot to party. Additionally, 2PM can now even emulate E.T. The allusion to the movie is humorous, considering their bikes don’t actually exist. This could all be leading to the inference that going crazy (likely alcohol-induced in this instance) can make you feel powerful and light.

We are used to 2PM being charismatic dancers in their MVs. That definitely doesn’t happen in “Go Crazy.” That is not necessarily a reason to dislike the choreography overall since there are some good parts. Just as with the scenes and effects, the opening made me think the choreography, while not charismatic, would still be fun. The member-formed motorcycle is cool, and the “The Bernie” is funny. The lack of uniformity in sections also adds to the feel of letting go and being crazy.

However, there are some sections that leave a lot to be desired. First, they do “The Bernie” way too much. This is a dance that can only be done so much before the lameness factor sets in. 2PM are too skilled in the choreography department to resort to trendy dance moves.

There is also the motorcycle-hop dance. Alright, hopping around on one foot for an extended period of time is difficult, so thumbs up for that. But why are they doing it in the first place? Even more importantly, why are they driving invisible motorcycles? These nonsensical dance moves only take away from the product. 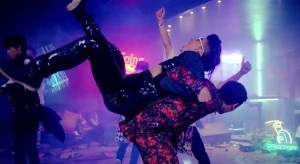 In 2PM’s favor, “Go Crazy” really is crazy. The track is about having fun while being young and simply partying the night away. They picked a concept and stuck with it wholeheartedly. They also avoided one of those awkward, mostly-empty club scenes. The MV should be applauded in that respect. It’s always a good thing when a MV actually fits the song.

Now, about the song. The instrumental is actually good, as it seems to blend both 2PM and g.o.d’s party song style: electronic dance with a bit of groove. The ending music was nice, as it has this dance feel without an overpowering electronic sound. There is a bit too much auto-tune for my tastes. It isn’t necessary in the chorus transitions at all and just becomes annoying after awhile. The same goes for the highly repetitive refrain. But, I didn’t expect a song about partying to have any sort of serious lyrics, so it’s all good in that respect.

Taecyeon is doing nothing to shuck his image as the derided “idol-rapper.” You would think after so many years in the industry, he would have improved immensely. He still seems to lack the flow needed to truly embrace his position as the group’s rapper. If he can sing well enough, then perhaps it’s time for him to just sing.

“Go Crazy” isn’t a really bad song, but it’s not that great either. When it comes to dance tracks by 2PM, it is definitely a marked improvement from “Hands Up.” However, in comparison to their entire discography, it falls short of their more mature sounds.

Overall, I really wanted to like this comeback. If you blindly ignore the MV or don’t think too much about it, then the song is okay enough. The entire package just leaves something to be desired and is remarkably average. But, at least there’s no “JYP” whisper (though Jun.K should start whispering his name instead).

One question remains though: where’s the goat from the teaser?