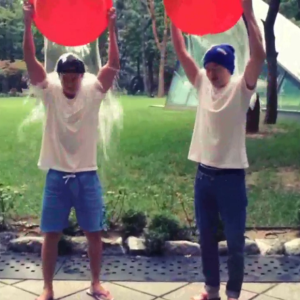 The social media fad that has swept up awareness for the ALS disease — the ice bucket challenge has been gaining major press for how many people are taking up the bucket. More recently, it has become a growing occurrence among the K-pop elite, with celebrities and idols such as Yoo Jae-suk, Siwon, and Amber all taking part in this challenge. Let’s take a look at the origin of this social media campaign for awareness and donations, and see what K-pop has to offer it.

Amyotrophic lateral sclerosis (ALS), also known as Lou Gehrig’s disease, is a debilitating disease that is a part of the Motor Neuron Disease (MND) category where “control muscles undergo degeneration and die.” People with this disease are usually expected to only live for 2 to 5 years after first experiencing symptoms, and there is no known cure for it. The disease is fast acting: as nerve cells die off, they are unable to activate the muscles that control many of the body’s functions. Hence, those muscles will become extremely weakened.

The ice bucket challenge was originally used as a fun way for participants to donate to their favorite charity but has since been co-opted for the ALS foundation because of some similarities between the shock of dumping the cold contents of the ice bucket and the shock of neurons in those affected by ALS. The premise is to provide another incentive for people to be philanthropic by performing the challenge or by paying an amount. Since being co-opted by the ALS, it has also taken on the added goal of spreading awareness.

Probably one of the largest criticisms of this challenge, one that has seen influential people like Oprah Winfrey and Bill Gates take part, is that the cause becomes an afterthought in light of proceeding to dump one’s self with the ice bucket. The novelty of dumping the bucket may have superseded the intention of spreading awareness.

Where these criticisms are fair, the initial goals of the challenge have definitely been met. Donations far exceeded the prior year’s total with over 41 million (US) dollars in donations and counting. Also, the number of people taking on the challenge has made ALS a talking point among people who may not have even known about the disease prior to the challenge taking place. Oftentimes, people will take the ice bucket and donate as well. Needless to say, it is a successful campaign in terms of donation and gaining general awareness.

Now, how does K-pop factor into this viral sensation?

One of the first people to take on the challenge was Tim, and he challenged Sean, Brian Joo, and Siwon. Since then, many other folks have taken up the ice bucket including Park Yong-man, the chairman of the Korean Chamber of Commerce and Industry, athletes like Hyun Jin-ryu, and many other idols.

The media likes to take on coverage of idols when they perform acts of charity. The question is, does this self-enacted response to a challenge constitute a different type of charity? It is certainly debatable whether some of these idols understand the purpose of the ice bucket challenge. However, that doesn’t detract from the fact that these idols are quite influential, and for those fans who do become curious and inquire into the cause, they will come out of it becoming more understanding of ALS. K-pop fans are known to be especially altruistic with their gifts, so maybe this challenge will compel substantial support from the K-pop fandom.

Some K-pop stars are certainly making more noise by making more efforts to spread awareness about the ALS. One high profile case that has been highlighted is Cube Entertainment CEO Hong Seung-sung, who has been battling ALS for three years. It is also surprising when major publicity can be made when Hyuna declines the challenge and chooses to donate instead. Also, Girls’ Generation‘s Sooyoung made it known that she hopes people will take time to learn more about Lou Gehrig’s disease and donate to the cause instead of just being swept up in the viral nature of the ice bucket challenge. Knowing that certain idols and actors take on this challenge to reveal the important nature of extracting more from the challenge instead of mere amusement is a great step towards achieving the other goals of the challenge (awareness and donations).

Also, one of the most powerful participants of the challenge and highlighting how important such a challenge could be in garnering support for those afflicted by ALS is Park Seung-il. He is a former Korean basketball coach who was diagnosed with ALS in 2002. The disease has left him devoid of motion except for “his eyes, eyelids, the third finger on his right hand and some of [the] muscles in his face.” He uses eye-scanning technology to communicate, thanked everyone for spreading awareness, and partook in the challenge himself.

Of course, there has been a fair amount of backlash with the ice bucket challenge due to certain circumstances. One case involved Baek Ji-young, who utilized the challenge as an opportunity to wish for the success of Superstar K6. Netizens were quite upset that she altered the purpose for her own self gain. Hyosung also received anger from the web because netizens thought she was careless and promoting herself based on what she was wearing when she took the challenge. Her dark colored bra and white top combination did not sit well with the Internet. When the challenge drew the wrong type of attention, the Internet neighborhood watch was on it immediately. One such vocal opponent of the ice bucket challenge was Lee Kyun, who claimed that people were having too much fun with the ice water. He mirrored similar international criticism as he questioned whether participants even knew what the disease was like.

While the ALS ice bucket challenge has its flaws, the very purpose of spreading awareness and raising money has been quite successful. Although some participants may be blindly taking on this challenge as merely a fun trend, it is the proliferation of the message to such a wide mass that has made this a stunning sensation. It is still gaining traction with more celebrities partaking in this challenge. Nichkhun donated and had an interesting post about conserving water while Rain did the challenge and donated $100,000 to the cause.

Some of the challenges are also revealing a lot about the star power and connections of certain idols. G-Dragon made headlines for boldly challenging Yang Hyun-suk, Lee Soo-man, and Park Jin-young while Henry challenged UN secretary general Ban Ki-moon.

By keeping the message straightforward and whole-hearted, the ALS ice bucket challenge seems to be achieving a lot of media attention. Also, joining in on the global conversation and being swept in the viral sensation does make this K-pop community feel a bit more connected with the rest of the world. Whether it is through the shock of dumping ice water on yourself or with the intention of spreading awareness about causes you care about, this philanthropic challenge seems for the most part to be a positive manner to start a worldwide discussion.