A few mixtapes ago, we brought you a bedroom beats playlist. With San E’s “Body Language,” the topic of sex returns to the limelight. Matching song, lyric and video, “Body Language” is fairly blatant on the subject matter. Aside from cuts of San E and Bumkey, the MV attempts to highlight the subject of sex more creatively by mixing in the concept of role playing and crafting it into something more acceptable in the public purview — the video game.

This video (game) uses the female to roleplay in a couple of fantasies, the teacher/student relationship and the doctor/nurse relationship. The teacher/student scene works simultaneously as a medium for exploring the S&M (slave and master) fetish. Ironically, the scenes unravel under the guise of the video game in which San E plays on his ‘Family Pad’ console. THis is a case where an explicit topic gets explored through a more generally tolerated medium. Scantily clad women become the objects of San E’s desire, and his game playing persona does not hide his interest in seeing these storylines to their conclusions.

As the audience, we get to see the ranging degrees of what is considered “appropriate representation” with other scenes in the video. For the two role playing scenes, the action can go on to an implied area, but after a certain degree it is no longer tolerable. The Game Over words flash on screen as San E yells “Stop,” implying that any further action will likely be too explicit. In addition, San E nonchalantly plays while eating chicken as long as the game doesn’t reach too arousing of a point. However, once the game has gone too far — when the teacher is tugging on the girl’s clothing — the cop played by Jaewoong will appear to cuff the player before there is any further advancement. 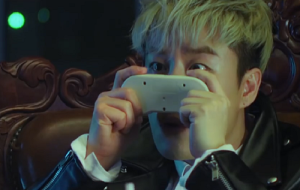 Similarly, this is addressed in the interactions of the two females (played by Han Song-yi and Rock Chae-eun). Some of the interspersed shots emphasize their physiques with close ups of their chests and butts. During one of the subsequent scenes, following a particularly close-up chest shot, San E recognizes that they may be pushing the boundaries of what is considered risqué. He relays this understanding of the adult content as he peeks behind his game controller.

With all this in mind, it would not be a surprise if this song was banned by MOGEF. The MV’s rating is 19+. That rating is definitely justified since its whole nature is mature. The topic of sex itself is likely not meant to entertain a younger audience, although the subject gets downplayed by San E with his comedic bits throughout the video. With the mixture of comedy, will this video necessarily feel alienating to younger audiences?

Song-wise, the content is smooth and debonair. It feels familiar to many other rap and R&B numbers. With his smooth, silky voice, Bumkey adds a great chorus that fits the bill. The track also has a moderate thumping speed. San E is clearly trying to woo the listener with the beat. However, with innuendo populating many of the rap verses, the lyrics avoid being outright explicit.

“Next is math time, what should I do, subtract? No add, add
Lastly, it’s gym time, move your body, harder, better, stronger (faster)”

The innuendo plays into the different types of characters San E fantasizes about. It’s a matter of likening things to animal, education or a daily sense of order. Each verse contextualizes the experience in a different metaphor. Sometimes, the implication of it comes off a bit forceful (for example, the sub note in the translation points out the metaphor of tiger was likely used as a double entendre).

I also find the chalk board with different types of fetishes particularly interesting. Some of these words seem to be shout outs as well, but it felt odd to me at first as to why he included names like Feggy Min and Woody Answer Jr. However, upon closer investigation, I realized that invoking those people and their alluring auras could be one way that he gives credence to their work (whether it be Feggy Min’s art or Woody Answer Jr’s directing chops). To explore desire gives way to what entices or what is considered coveted. Why does role play end up exciting people to action? Is it the media images that are presented, or is it another dimension where the frustration in set lives becomes hypersexualized and imagined to fit someone’s desire?

Overall, the song and MV give a lot to think about concerning the topic of sex. Its presentation of body parts mixed with comedic breaks gives way to a general grasp of conservatism. The lyrics are implicit and show an undercurrent of repressed sexual exploration. Maybe this song pushes the boundaries a bit, but the MV is forthright enough even with all its tropes.