I was rather confident that this video would involve butthurt men moping about rejections from ice princesses while hissing Vanilla Ice’s refrain of “Ice Ice Baby” because the title looked pretty self-explanatory. But in actuality, it’s just misleading for presumptuous viewers like me who hate being thrown off guard by a sudden twist in the tale. Thankfully, the tale was hilarious so I overlooked that slight betrayal.

Parc Jae-jung’s “Ice Ice Baby” is about ice princesses, or confident, self-sufficient women who do not feel the need or desire to pander to men’s wishes but ironically end up pandering to their sexual fantasies, but “ice ice” refers to the brain freeze Jae-jung undergoes when attacked by the brilliant smile of his beloved. He becomes a babbling, bumbling baboon the moment he sees her, forgetting all the sonnets he had penned for nights at a stretch. What an ingenious re-appropriation of a common trope!

The song, despite its high-flying lyrics and concept, is a great listen. Retro-themed, it is a fun song which lifts your spirit and even compels you to sing along. The prelude, in fact, is extremely catchy and, sadly, the pinnacle of the retro-ness of the song because once the vocals come into picture there is a visible but not uncomfortable dip in the musical composition. It becomes a tad boring and predictable, something which the prelude promises to defy. Sonically, therefore, the song is a very addictive listen despite Jae-jung’s rough voice texture.

Things get terribly entertaining when one goes through the lyrics and the video. The video goes for a minimalist approach which is great, but then it gets down to silly “icy” symbolism like ice-cream and ice cubes which is, politely put, rather unnecessary considering how we all must have a general idea of ‘ice.’ If I am again being presumptuous here then due apologies to your ice-deprived existence, and excellent foresight, Jae-jung. 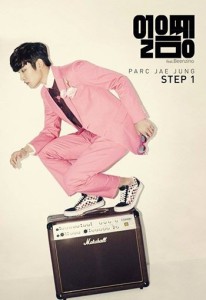 The fact that he seems to have raided Eric Nam’s wardrobe is not half as disturbing as those visually nauseating patterns gallivanting all across his polka-dotted suit and backgrounds. Why would anyone even bother letting go of that neat ice slab stage for eye sore inducing patterns?

Ice slab stage reminds me of two things: Frozen and white guys – two things South Korea is obsessed with. Knowing that discussing the former may cause you to flip your table, I shall stick to discussing the latter, and unfortunately there is not much to discuss except that they are all from Berklee. Just look at them playing the drums and the guitar, and you’ll know exactly what I am talking about! And everybody knows what happens if you are white and Berklee-trained – you become an accessory to flaunt! But remember, a cheaper accessory compared to white women. Know your place, white men!

To get his ice princess.

And what is the best way to get her?

Honestly, who is she supposed to date: Jae-jung or the red heels and the white brigade? Because clearly the latter seem to be doing all the real wooing and seducing.

It’s not as if things didn’t look already dismal for this new adult when Beenzino comes in rapping his birth chart which is basically a super fast rhyming poem on how cool he thinks he is.

“I don’t know if you know me
I’ll introduce myself in 16 measures
28 years old with a foreign car
The up and coming of Korean hip-hop, number one
But I won’t go on TV because
I don’t like fake scripts
Becoming a musician who likes music more than anything else
Was my dream since I was a child
These days, that’s how I’m living
Baby, can you feel my swag and all these chains and designer brand girl
But u never gave me attention baby, why baby”

I don’t know, but here’s a wild guess Beenzino – maybe, since it’s not glaringly evident, maybe she is not interested in you? I know the idea is just baffling. I mean who could reject that foreign car and that steely determination to not go on TV because of fake scripts (what the hell are original scripts then?), but personal choice is something your un-updated Rap-ford dictionary seems to have missing. How about giving the Oxford one a try, eh?

Now feeling up his chains and designer brand is one kind of repulsive; having the same words sung by a tiny kid acting as a 28-year-old Beenzino is another. I get it. You don’t want to come on TV because you are camera shy rebellious. But why make the kid go through the torture of lip-syncing those inane lyrics against a background of women’s silhouettes?! He is not 28; he barely passes for eight! And then you have the other 18-year old, aspiring to be 28 but coming off more as eight, talking about becoming “ice.”

The pronunciation of ‘ice’ is similar to that of ‘adult,’ so what Jae-jung is actually saying is let’s get down and dirty and become adults because adulthood means picking up girls and having sex. I don’t know what this ethical, moral, and social conduct is nor do I care because “the night is young and so are we/ We can do anything we wanna, baby.” Ice Ice Baby.

Now here is what needs to happen. KBS needs to lose its mind once again and go on a ban rampage because of the sexual reference, and Jae-jung and kid!Beenzino need to go watch Pororo and reflect upon their actions.